Autonomy: The Vision of Autonomous Shipping

The end of 2018 provides an excellent opportunity to highlight some of the measures that have been taken by the maritime industry over the past year to develop a better understanding of autonomous shipping. A drive towards autonomous shipping has been embraced by many major players such as Rolls Royce and Wärtsilä, and this has led to numerous new strategies, visions, and projects that are pushing the boundaries of technological innovation. It’s no longer a matter of whether technology can achieve this next step, but rather how the technology is used to accomplish it, and what we need to do as an industry to ensure that autonomous operations are safe and efficient.

Autonomous shipping has evolved tremendously in recent years. To take a local example for me, in Finland the government decided in 2017 to support an initiative called One Sea, which aims to operate autonomous maritime ecosystems by 2025.  In addition, ÄlyVESI - Smart City Ferries has started working on a project that will eventually provide the foundations for the class requirements for autonomous vessels.

With numerous development projects currently underway, we’re going to see models that will feature differing levels of automation and autonomy.

These prototypes will ultimately work towards generating a practical autonomous vessel suitable for daily tasks within the shipping industry.
The interest in autonomous shipping was evident at the recently concluded Society of Naval Architects & Marine Engineers (SNAME) conference, where I delivered a presentation on autonomous ships that explored the importance of stability; a factor that is crucial for any ship. In this article I will go beyond that and also examine the evolving regulations, design, and technology within autonomous shipping. These key areas will all need to cooperate in order to produce the best possible outcome.

The Regulations
The technical boundaries to autonomous shipping are, by and large, less formidable than the regulatory ones. The work to change this, however, has begun. The 99th session of the Maritime Safety Committee took place in May 2018, which officially commenced work on addressing a regulatory framework and will continue to take place during the following four sessions until mid 2020. The committee is also focused on safety, secure and environmentally sound Maritime Autonomous Surface Ships (MASS) operations. MASS has been defined as a ship which, to a varying degree, can operate independently of human interaction.

The current international maritime regulation on ship stability is largely stipulated with the assumption that a ship is manned and based on the SOLAS Chapter II-1 titled “Construction – Structure, subdivision and stability and stability, machinery and electrical installations”. However, some requirements for building a safe ship in terms of stability will still apply for unmanned ships such as double bottom.

The autonomous industry will also have to contend with the fact that the speed of technological developments is outpacing global regulatory development, as seen in the length of time it has taken to sustain clear 2020 sulphur cap guidelines. Many national regulators have encouraged the shipping industry to trial autonomous or remote controlled ship operations within national waters, which is a positive initiative. This has led to many countries developing their own regulations during the initial trial stages. However, in the long run cooperation is needed between different countries to ensure consistent regulations are in place.

The Advanced Autonomous Waterborne Applications Initiative
One example of research that has been conducted is the AAWA initiative - or Advanced Autonomous Waterborne Applications.
From February 2015 – June 2017, a joint industry and academic research project on autonomous ships gained funding for €6.5 million from the Finnish Funding Agency for Technology and Innovations. The project sought to analyse different scientific challenges related to autonomous ship operations; technology needs, risks, incentives and regulations/liabilities. It was through this initiative that autonomous and remote operations for ship navigation, machinery and all on-board operation systems could be developed. Rolls Royce and other leading industry players, including NAPA, DNV-GL, Deltamarin, and Inmarsat led the project, and the research partners included Aalto University, Tampere University of Technology, Åbo Akademi University, and VTT technical Research Centre Finland.

The first phase of the AAWA initiative concluded that hybrid variations between remote and autonomy solutions will happen. However, as previously mentioned, the technology to make ships autonomous current exists, but much still needs to be done to ensure it ‘s reliable.
For example, autonomous ships may reduce the risk of human error given there’s no crew, but new types of risks will be created, and this means that vessels will need to be as safe as existing ships, possibly even more so. A great amount of work is still needed to address the risks with new or adapted technologies. A major topic that was addressed in the AAWA initiative was marine situational awareness and autonomous navigation. At present, a pair of human eyes and ears is currently used as the main sensors for decision-making and operations, whether a ship is equipped with digital sensors or not.

This means that a logical starting point is to analyse the current extensive portfolio of sensor products onboard ships to assess whether they are available and suitable for automation -  why focus on developing new products if a suitable product already exists?
What are the next steps? Technological solutions will need to be analysed in greater depth to understand new risks, legal challenges and the stakeholders involved in autonomous operations. Ultimately, change is possible, but political willingness is needed, and liability issues need to be addressed.

This initiative’s actions triggered a clear understanding that stability will remain vital regardless if a ship is autonomous or not.

Autonomous Shipping Stability Management
Stability management remains a critical part of the design process whether it is for a manned or autonomous vessel. Designers will need to start understanding new technologies, such as sensors, big data, and artificial intelligence if more decisions are taking place ashore. New tools, software for monitoring stability, longitudinal strength and movement may also be considered by maritime professionals. It will be important for them to look beyond the current processes of ship design and consider the impact of autonomous operations.

Stability computers, which typically process data for up to 200 sensors sources, will also have a greater impact due to the significant increase in the number of sensors being used due to the autonomy on the ship. This will create better situational data and predictions being processed, with the possibility of introducing increased monitoring for weather, cargo displacement, and other technical areas. NAPA Fleet Intelligence is a present day example of allowing onboard software to help monitor and improve a ships performance. This can then be analysed from ashore using cloud based software; which increases awareness of forecasted weather along the sea passage, optimizes the ships performance, and increases cargo and ship safety. All of these are the ultimate functioning goals and processes of an autonomous vessel or remote controlled ship. This kind of onboard technology has helped pioneer automated and reporting for monitoring ships.

The stability computer will also become the base for providing stability solutions and making plans automatically based on the supplied data from these sensors - once again highlighting the fact that a stability officer and crew will not be needed on-board. However, alternatively, different scenarios from the computer could be transferred via the cloud to shore, leaving the decision making to a shore-based team.

The Design
The original design of autonomous ships is still in its infancy, as progress is continuously made on the technology side. However, naval architects are considering numerous factors and studies to understand how it will affect ship stability and safety. For example, autonomous vessels designs do not need to factor in crew spaces, control rooms and bridges, but must be adapted to suit automated operations and alternative propulsion systems instead. Naval architects will also need to ensure that autonomous vessels are fit for purpose, which is why development is focused on smaller vessels, rather than passenger vessels to begin with, as there will be less associated risks.
A new design need is also emerging; rather than the ship itself, this one focuses on the requirement for the design of land-based centres for controlling ship operations, as these may differ slightly from a normal fleet operations centres. This highlights, once more, that the autonomous shipping industry will need time to determine best operational practices.

Where Next?
With research and simulations now transitioning to trials with existing and new solutions, the future of autonomous shipping is slowly but surely progressing. Stability solutions will be one section of a vast network for operating autonomous vessels, and solution providers as well as shipping companies will still need to work on increasing the level automation and intelligence in decision making in order to aspire for totally machine-controlled vessel. Ultimately, autonomous shipping will start to redefine the maritime industry. 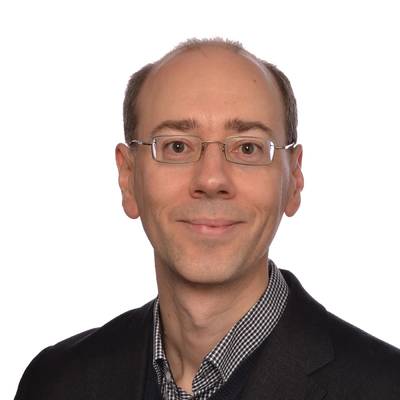 About the Author
Jussi  Siltanen is Product Manager at NAPA Safety Solutions. He currently oversees the management of NAPA’s on-board solutions for stability and safety. 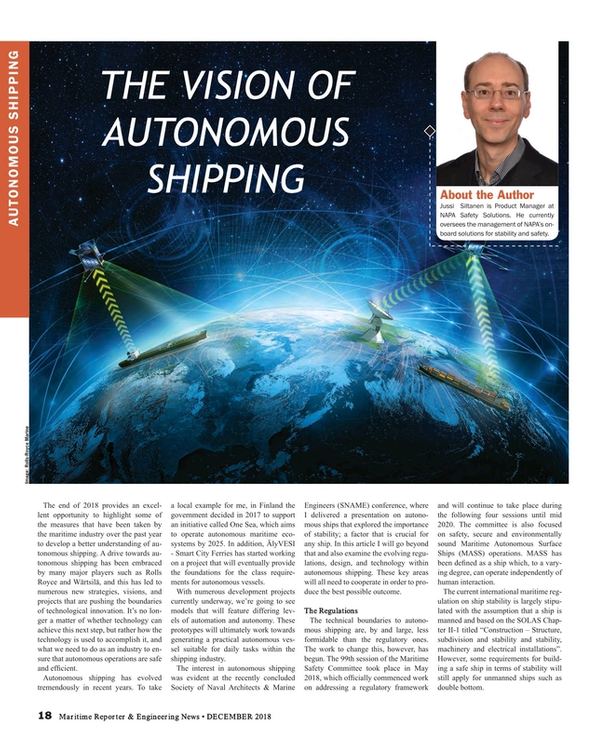