The Vessel General Permit (VGP) falls under the National Pollutant Discharge Elimination System (NPDES) of the Federal Water Pollution Control Act (FWPCA), better known as the Clean Water Act.  It is administered by the US Environmental Protection Agency (EPA), an agency not well known or understood by the maritime industry.

For years, the EPA had adopted a policy of broadly exempting discharges into the water that were incidental to normal operation of vessels.  That changed after environmental advocacy groups prevailed in a judicial challenge.  The first iteration of the VGP entered into effect in 2008 and remained in effect until replaced by the current iteration in 2013.  That second iteration is due to be replaced in December 2018, but the proposed replacement has yet to be shared with the regulated community.

Incidental Discharges
The VGP program establishes requirements relating to 27 types of vessel discharges for the purpose of minimizing their impacts on surrounding waters.  All commercial vessels of 79 feet or more in length being operated as a means of transport must comply when operating in US inland and coastal waters (including the US Great Lakes) inside the US territorial sea (3nm).  Vessels of less than 79 feet must comply with the ballast water discharge requirements.  The VGP requirements include best management practices (BMPs) for each of the 27 discharges, as well as requirements for corrective actions, inspections, recordkeeping, and reporting.
Complicating matters, the NPDES allows individual states and Native American tribes to establish additional water quality standards that are included in the VGP.  These standards, which vary from state to state and tribe to tribe and are often more stringent, create additional headaches for vessel operators.  For instance, several states include various ballast water treatment standards and requirements.  Some of these requirements have been deemed unachievable and have been successfully challenged in court.
The VGP itself is a general permit issued under the NPDES program. Vessels do not receive an individualized copy of the permit and it is not mandatory to keep a copy on board.  However, the EPA recommends that a copy of the VGP be kept on board the vessel for reference and to ensure that all requirements are being met.
Under the EPA regulations, the operator of a facility is generally responsible to compliance with environmental requirements.  If a covered vessel is in the care or custody of an entity other than the owner for a period of time (such as being under charter), it is recommended that the agreement specify which party is responsible for compliance with applicable requirements under the VGP.
Vessels that are 300 or more gross tons (GT) as measured under the International Tonnage Convention measurement system or have more than eight cubic meters (2,113 gallons) of ballast water capacity are required to submit a Notice of Intent (NOI) using the EPA’s eNOI system to receive coverage under the permit.  Smaller vessels covered by the VGP program are still required to maintain the appropriate records including a copy of the Permit Authorization and Record of Inspection (PARI) form and make it available upon request.

Overlap
Many of the BMPs may overlap with standard marine practices, making them mandatory.  Others are new to most vessels and operators and require incorporation into standard operating procedures.  In addition, the VGP program has paperwork aspects that will require special attention. The paperwork aspects are important as they are the means to demonstrate compliance if requested by the EPA or an authorized agent, such as the U.S. Coast Guard.
Compliance with the VGP does not relieve entities of compliance with other existing laws and regulations.  Other potentially overlapping requirements include, but are not limited to, the following administered by the US Coast Guard: (1) ballast water management; (2) oil pollution prevention; (3) sewage discharge; (4) the Act for the Prevention of Pollution from Ships [implementing MARPOL provisions]; (5) the Oil Pollution Act of 1990 [OPA 90]; and the Clean Hull Act.

Recordkeeping, Reporting & Inspections
Numerous records must be kept to comply with the VGP.  These include owner/operator and voyage information, a voyage log, records of any violation of any effluent limit and corrective action taken, a record of routine inspections and any deficiencies or problems found, analytical monitoring results, a log of findings from annual inspections, a record of any specific requirements given to the vessel by the EPA or state/tribal agencies, and additional maintenance, certification, and safety exemption claims.
Certain discharges must always be reported, including ballast water release, spills that endanger health or welfare, spills of oily materials, and a report of annual noncompliance.  An annual report is also required for all covered vessels.
While the amount of record keeping is potentially onerous, the EPA does state that it does not intend to require separate records from that which is already required by the Coast Guard.  Rather, vessels can harmonize their recordkeeping practices, where appropriate, so that records are not unnecessarily duplicative.  For example, information can be logged with maintenance records, the ship’s log, in existing ISM/SMS plans or other additional recordkeeping documentation already maintained by the vessel.  Also, records may be kept electronically.
If any of the effluent discharge limits in the VGP are violated, corrective action must be taken.  This includes an assessment investigating the nature, cause, and potential options for eliminating the problems.  Depending upon the extent of the problem, the VGP provides deadlines for resolving the issues and failure to take corrective action within the specified time period is another permit violation.  The VGP contains a full description of the corrective action process.  The allowed time for minor changes is two weeks, for major changes requiring new parts three months, and for major renovations before relaunching from the next drydocking.  A record must be kept of all corrective actions.
Various types of inspections are required under the VGP, including routine visual inspections of all accessible areas of the vessel in order to verify that effluent limits are being met.  A more comprehensive annual inspection must be conducted once every 12 months that must focus on areas likely to generate harmful pollution or violate effluent limits.  Drydock inspections are also required.  Special monitoring is also required for select cruise ships and vessels with experimental ballast water treatment systems.  The findings of each routine visual inspection and annual inspection must be documented in the official ship logbook or as a component of other recordkeeping documentation.

Conclusion
As previously stated, the current version of the VGP program expires in December 2018.  The EPA has yet to share its proposal for the next iteration, as of mid-June 2018.  Court decisions lead one to expect that the new program will add new requirements.  On the other hand, recent EPA actions in other areas lead one to expect a reduction in requirements.  Time will tell, but the window is narrowing and covered vessels may have to scramble to adapt to the changes.

About the Author
Dennis L. Bryant is with Bryant’s Maritime Consulting, and a regular contributor to Maritime Reporter & Engineering News as well as online at MaritimeProfessional.com.
t: 1 352 692 5493; e: dennis.l.bryant@gmail.com 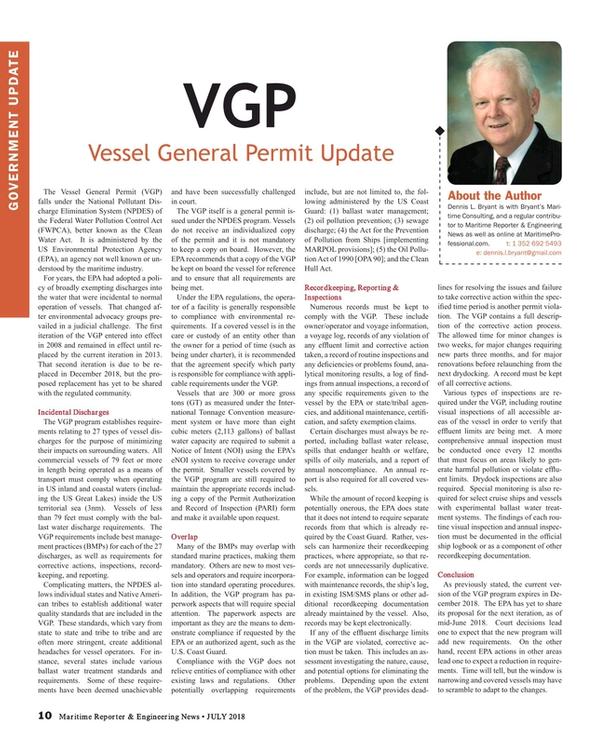 Other stories from July 2018 issue