Late last year Caterpillar introduced the Multi-Engine Optimizer, or MEO. According to T.E. “Dra” Wiersema, Product Manager, Caterpillar Marine, 85 to 90 percent of the value of MEO is in fuel savings. But the story of MEO is so much more. As the maritime industry increasingly moves toward data analytics to control everything from fuel management to overhaul scheduling to route planning, there has been the requisite avalanche of new products and systems purporting to deliver incredible returns. If the performance of MEO matches Wiersema's enthusiasm, power management in the maritime sector is about to change dramatically.

Meet MEO
The Multi-Engine Optimizer from Caterpillar is, essentially, what it’s name suggests: an efficient means to manage power onboard a vessel. “We load this box with the performance maps of the engines, from the fuel performance to the NOx performance and including the torque maps,” said Wiersema. “Then we have a control algorithm that allows up to select engines; it not only selects engines, but also load points based on load demands that we get from the vessel.”
So, for example, if the vessel sends a signal for a 4 MW load, MEO evaluates the engines available and selects the best combination. But the power of the systems doesn’t stop there. “It doesn’t just pick engines, it picks engines and assigns loads so that every engine is operated on an independent load point, which is unique and not the norm for this industry.”
While Wiersema is MEO’s biggest advocate, he also acknowledges that MEO is not right for every vessel. “There is a possibility that MEO can save you nothing. That’s not normal, but it’s possible.” The process to evaluate the potential value of MEO starts at the very beginning, sitting with the naval architect and the owner for a realistic view of the vessel and its operating profile. “There are applications where there is a high variable load where a naval architect cannot design the perfect engine package to always operate in the sweet spot,” said Wiersema. “That’s where MEO excels.”
One of the first pilot programs for MEO was a 32-week test with an overall average fuel savings of 7.3 percent, said Wiersema. “But there were some weeks where we saved 0.5 percent; other weeks where we save 12 percent.”
To help designers and owners best evaluate the value of MEO, Caterpillar offers a Sizing Tool where all parameters are entered to determine the best package of engines.
The Big Virtual Engine
“MEO is digital, with feet,” said Wiersema, noting the flexibility the system allows. “I no longer care about individual engine maps. What matters is the vessel’s load profile, and putting together the best combination of engines that will put out the lowest possible fuel consumption.” And the higher the power, the bigger the potential savings.
MEO essentially helps to maximize power flexibility, mixing medium speed, high speed, constant speed, variable speed, large power, small power and even battery power.
Wiersema said Caterpillar Marine is speaking to some cruise ship customers, “and you are talking 60 to 70 MW of power. Do you know what 1 percent of fuel savings is on 70 MW of power in dollars? It’s huge.”
Watch Wiersema's full interview with Maritime Reporter TV here.
(As published in the January 2018 edition of Maritime Reporter & Engineering News) 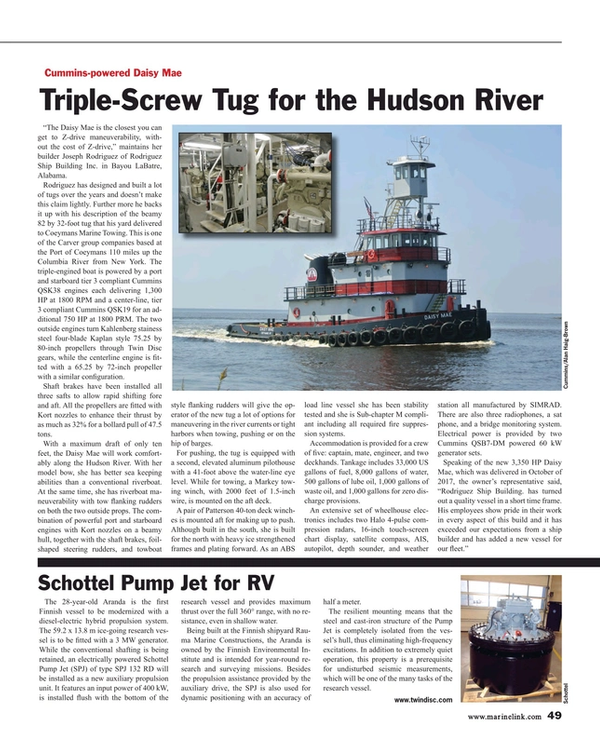