Dispersants ... Will we ever be able to use them again?

Background
Oil dispersants are substances that break up large quantities of oil into small droplets, and it has been consistently demonstrated over the years that they can be an effective response tool depending on the type of oil, weather conditions, and depth of the water. These small droplets are easier to disperse and ultimately will be subsumed by microbes in water bodies, thereby remediating the marine environment. Dispersants are usually applied to affected areas by aircraft, although vessels can also be used to apply dispersants. Dispersants have been used since the 1960s to respond to oil spills, but gained notoriety during the 2010 Deepwater Horizon incident due to the large amounts of dispersants that were used over a long period of time, where the use of dispersants was essential to spill remediation. However, despite the success of dispersants in remediating the spill, dispersants were believed by some parties to have created additional environmental issues, and the EPA has been working on revising its rule on this for some time.
Dispersants have become even more essential to a plan holder’s response planning.  In 2009, a rulemaking by the U.S. Coast Guard made dispersant capability a regulatory requirement for tank vessels. Further, in January 2014, the Coast Guard’s Non-Tank Vessel Response Plan requirements came into force, which required some non-tank vessels to also plan for dispersant services in the case of spill incidents. Currently, dispersants feature prominently in many vessel response plans.

The Proposed Rule
The Proposed Rule aims to drastically change current practices in the use of dispersants. With some exceptions, most of these changes will have the effect of hampering response efforts by tying down decision making or banning the use of most if not all dispersants currently listed on the EPA Product List. The following sections describe particular changes in the Proposed Rule that are problematic and one proposed change that appears positive.

Preauthorization Plans
Currently, preauthorization plans allow the Federal On-Scene Coordinator (“FOSC”) to approve the use of dispersants without seeking approval from other agencies or state officials. The Proposed Rule would mandate that preauthorization plans “must” limit quantities, duration, and use of dispersants, without knowing a particular disaster’s parameters. These changes are troublesome because they limit the discretion of experts on the ground to respond to situational changes in disaster situations, which could exacerbate damage from spills.
In addition, the Proposed Rule would alter methods of approving and reviewing preauthorization plans. The Proposed Rule mandates that the withdrawal of approval by any entity can invalidate a plan, creating uncertainty in their validity. Additionally, the Coast Guard, the agency that arguably has the most experience and knowledge of dispersants, does not have a specific role in the approvals process, while several other agencies have prominent roles.
The Proposed Rule also adds arduous requirements in reviewing plans. The Proposed Rule would require the (“Regional Response Team”) RRT and/or Area Committee to review and make revisions at least every five years; after a major discharge or a Spill of National Significance (“SONS”); to address revisions of the National Contingency Plan Product Schedule(“Schedule”); to reflect new listings of threatened and/or endangered species; and to address any other change that may impact the conditions under which the use of chemical and biological agents is preauthorized.  Additionally, the Coast Guard representative to the RRT is not given any particular authority, although approval is required by the EPA representative, Department of Commerce (“DOC”), Department of Interior (“DOI”), and the state RRT representative.
Responders would also have their authority limited by a proposal to mandate concurrence and consideration of alternatives in the use of agents not in a preauthorization plan. Currently, a FOSC can obtain concurrence “when practicable” from federal and local agencies before using a dispersant or other agent not listed in a preauthorization plan.  The Proposed Rule removes the “when practicable” language, making such consultations mandatory and effectively limiting a FOSC’s discretion in a disaster.

• Use of Burning Agents
One of the few bright spots of the Proposed Rule is a provision to grant the FOSC greater flexibility and discretion to use burning agents without seeking approval or having to consult with other agencies. In improving this flexibility, the EPA is recognizing that burning agents have “become an important response option that is used more frequently” and note the important role that burning agents played in the Deepwater Horizon. The EPA also notes the value of using burning agents in remote locations, such as responses in the Arctic.

• Storage and Use of Agents
The Proposed Rule also has a confusing provision regarding the storage and use of agents.  Currently, manufacturers provide information on storage and use. The Proposed Rule would allow the use of agents only when the Responsible Party (“RP”) has certified that the agents have been stored pursuant to their recommended conditions. However, the Responsible Party (“RP”) rarely, if ever, is responsible for storing agents, so it is unclear how this provision could work in practice.

• Recovery of Agents from the Environment
The Proposed Rule would establish a requirement for a RP to ensure the removal action adequately “contains, collects, stores and disposes, of” agents intended to be recovered from the environment. The Proposed Rule is not clear to which agents this would apply or proper procedures for recovery.
Additionally, the Proposed Rule would require the FOSC to provide information to the RRT regarding the chemical or biological agent used, including product name, the quantity and concentration of the agent used, the duration of use, the locations where the agent was used, any data collected, and an analysis of its efficacy and environmental effects. The report would have to be provided within 30 days. The Proposed Rule would also prohibit the use of “any other chemical agent, biological agent, or any substance that acts as a sinking agent when mixed with oil.” This prohibition would be supplemental to the current ban on sinking agents themselves.
• Data and Information Requirements for Dispersants
The Proposed Rule would require more burdensome data and information requirements to list a dispersant. The current rule is based on an effectiveness test, whereby a manufacturer must maintain an effectiveness value of 45% or greater to be added to the Schedule. The effectiveness test is much more complex and stringent under the Proposed Rule. And, if the dispersant does not meet the new toxicity requirement, it will not be listed on the Schedule. This is a significant change because preliminary industry testing, as we understand it, raises serious questions that many, if not all, existing dispersants would fail to meet the proposed toxicity requirements.

Conclusion
While the Proposed Rule allows for a 24-month transition period, these changes would substantially hinder the future use of this proven response technology if the Proposed Rule implemented as written. Indeed, the entire proposal appears to promote a bias that dispersants are toxic without considering the big picture that dispersants ultimately help the environment. While using dispersants, like any response technique, is not without potential environmental  consequences, they are some of the most effective tools available to fight large scale oil spills. The Proposed Rule would hinder the operational on-scene decision making needed by the FOSC, which will only serve to exacerbate disasters amidst bureaucratic wrangling.  Limiting the use of dispersants as proposed by EPA is not a viable solution—neither for the maritime industry nor for the environment on which it depends. It is essential that members of the industry ensure that their voices are heard by submitting comments to EPA by the April 22, 2015 deadline if it is not extended.

Stefanos N. Roulakis is an associate for Blank Rome and concentrates his practice on international and maritime law and counsels clients on a wide range of maritime and regulatory matters.

(As published in the April 2015 edition of Maritime Reporter & Engineering News - http://magazines.marinelink.com/Magazines/MaritimeReporter) 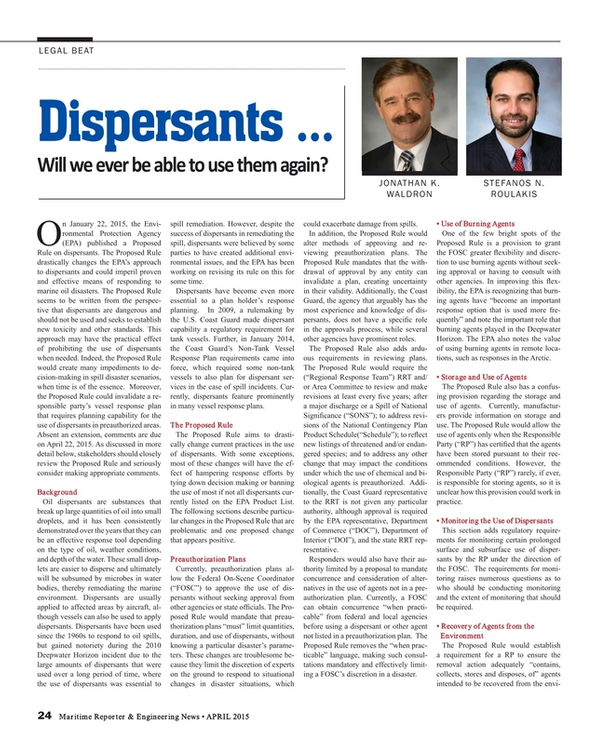 Read Dispersants ... Will we ever be able to use them again? in Pdf, Flash or Html5 edition of April 2015 Maritime Reporter

Other stories from April 2015 issue