Zeroing in on Zukunft

The U.S. Coast Guard Commandant addresses a packed Passenger Vessel Association meeting and outlines both the challenges and opportunities facing his organization.

Long Beach, CA: Less than 12 hours after the New England Patriots’ late game heroics stunned the Seattle Seahawks in Super Bowl XLIX, U.S. Coast Guard Commandant Admiral Paul Zukunft found himself facing a standing room only audience of Passenger Vessel Association (PVA) delegates, all thirsting to hear what the Coast Guard and the government’s regulatory sector had in store for them in the coming months and years. Clearly, and despite some late night celebrations (or tearful regrets), few, if any delegates slept in on Monday morning.
For his part, and as a keynote speaker for this year’s annual PVA Convention, Zukunft, talking without notes, neatly led listeners through an informative, 37-minute speech that touched upon where the Coast Guard has been, where it is going and what that meant for the gathered stakeholders.
Conceding that the nation’s fifth uniformed service had taken a right turn to take on an overweight maritime security mission in the messy wake of 9/11, he also declared – noting the $1 billion per day commerce passing through the local ports of Los Angeles and Long Beach – that the Coast Guard ultimately has the responsibility to not only protect commerce, but also not to impede it. Those remarks set the tone for what was to come next.
The nation’s 25th Commandant also pledged to remain ever mindful of the impact of government regulations on the small businesses which make up a fair share of PVA stakeholders. And with that, he distanced himself and the Coast Guard from pending federal legislation that would change the equipment and the methods that small passenger vessels would be required to handle rescue situations underway. The proposed new rules, which he said had circumvented the Coast Guard, could cost vessel operators hundreds of thousands of dollars for new, out of water survival craft. Beyond this, the proposed regulations – a hot button issue for PVA stakeholders – wouldn’t necessarily improve safety.
Along the way, ADM Zukunft outlined what is likely to be a growing laundry list of mission sets for his charges, not the least of which will include the explosion of crude oil shipments (increasing from 2 million barrels annually to more than 50 million barrels) on the U.S. marine highway system. And, while also pledging that he had no intention of letting the Coast Guard “be the speed bump that impedes that commerce,” he acknowledged at the same time his responsibilities to make sure that maritime transportation is carried out in a safe and environmentally correct fashion.
In order to do just that, however, he added that the Coast Guard’s marine safety mission had to evolve into a career path, and not just a side trip on the way to twenty years of service. Marine safety personnel, he said, would henceforth increasingly spend at least eight to 10 years honing their craft in those roles. Those words had to be music to the ears of a marine community that, to a certain extent over the last decade, has lost faith in the Coast Guard’s level of competence in these missions. Putting emphasis to the point, he insisted, “The COI should mean something to passenger vessel consumers.” But that won’t be an easy task for today’s Coast Guard which is increasingly losing experienced marine safety personnel to more high paying private industry positions.
Elsewhere, there are even bigger challenges. Even as the Arctic beckons to oil and gas firms, Zukunft pointed out that a large passenger cruise vessel was already planning a Northwest Passage transit this summer. Oil and gas exploration will also come, he added, when it is economically and operationally feasible. For all of it, the Coast Guard – itself suffering from a paucity of icebreaking capacity – will have to be ready to respond when crisis strikes. It remains to be seen the President and Congress will afford them the necessary dollars to get the job done.
Still relatively new to the Coast Guard’s top job, the affable Zukunft nevertheless isn’t afraid, in his own words, “to step on the third rail” once in a while. As a case in point, he once again warned of the unintended consequences of recent proposals to revoke the Jones Act. At the same time, he advised the gathered crowd that the Coast Guard must have a relationship with commercial maritime stakeholders, but not necessarily a partnership. “We can’t be regulators and partners at the same time,” he said.
Following his prepared remarks, we asked Zukunft about the pending so-called subchapter M towboat rules looming for as many as 4,000 previously uninspected inland vessels. Asked if operators could expect closure in this calendar year, the Commandant declined to set a timeline for a final rule, saying simply, “Subchapter M and the ballast water rules are among our top priorities right now.”
The presence of the Coast Guard’s chief executive at the annual PVA event underscored the important work happening this week in Southern California, but also the Coast Guard’s commitment to be a part of that process. And, while some West Coast football fans could be perhaps unhappy with Sunday’s final score, no one could say that ADM Zukunft hasn’t waded into the commercial waterfront with his sleeves rolled up and his ears open. To that job, he brings surprising candor, competence, and the confidence to believe in what’s to come next. That’s more than a good start.
– MarPro

In advance of the “State of the Coast Guard” Maritime Reporter & Engineering News editor Greg Trauthwein secured a one-on-one with U.S. Coast Guard Commandant Admiral Paul Zukunft for exclusive insights on the path, direction and speed of the U.S. Coast Guard moving forward.

Coming in the March 2015 edition of Maritime Reporter & Engineering News.

(As published in the February 2015 edition of Maritime Reporter & Engineering News - http://magazines.marinelink.com/Magazines/MaritimeReporter) 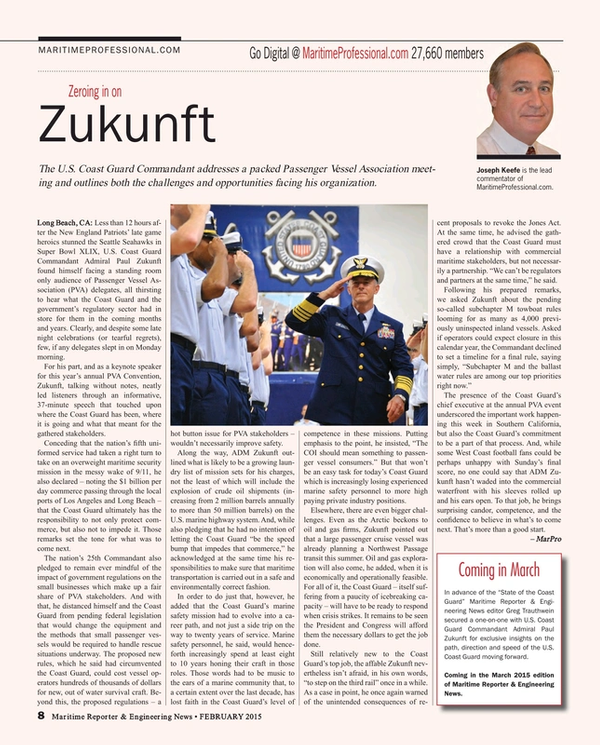 Read Zeroing in on Zukunft in Pdf, Flash or Html5 edition of February 2015 Maritime Reporter