Increasingly, environmental demands from governments and groups - large and small - will continue to shape the way in which the marine business is conducted.

Pressure on ship and boat owners to keep the waters in which they work as pristine as possible has been building for years, but has built even more steam in recent months with a rash of cases involving illegal dumping of oily bilge water in coastal waters.

Deserved or not, the maritime industry has become a visible target, and astute owners will invest in the technologies now to keep ships and boats running clean for years to come.

At the SMM 2004 exhibition in Hamburg, Germany, Alfa Laval, a leader in separation, heat transfer and freshwater generation, announced its broadened offering of solutions for environmental protection, dubbed "Pure Thinking." The highlight of a company presentation was the announcement that a new, "potent technology" for dealing with unwanted organisms in ballast water - a technology created in cooperation with Swedish company Benrad AB and is based on the patented Benrad AOT (advanced oxidation technology) - is already in full-scale trials aboard a Wallenius Marine transoceanic carrier and will be commercially available as early as 2006.

In addition to its ballast water system, the company is targeting two other areas for the push: Bilge cleaning, where it already offers the EcoStream solution; and Crankcase gas cleaning, where a product is under development. "As with all new technologies," said Peter Carlberg, General Manager of Alfa Laval Marine and Diesel, "There will be a lot of challenges over the next 10 years or so. Both working and nonworking solutions are going to reach the market, so ship owners need to know that the solution they purchase rests on a solid foundation of knowledge and support." When it comes to ballast water treatment, the challenges of onboard installations have been taken into account when setting the commercial launch for 2006.

A full-scale installation of the solution was made aboard a transoceanic car and truck carrier in autumn 2003. The test system, retrofitted while the vessel was in full operation, is integrated with the ship's ordinary ballast system and can be operated during ballasting and deballasting.

The Problem The transport of microorganisms and even larger species in the ballast water of ships has caused a wide range of environmental and economic catastrophes, and solutions has been a pressing issue for years. While local legislation already exists in some areas, future international regulations soon to be put in effect will demand certified solutions to the ballast water problem.

The IMO convention adopted in 2004 will require ships constructed in 2009 or later to meet ballast water treatment standards. By 2014, existing ships must also start to meet these standards. Though IMO has not yet finalized the test procedures required for certification, indications are that many of the technologies currently proposed or being researched will be unlikely to comply.

Besides being well suited to the marine environment, any control measure must meet a number of criteria for biological effectiveness, safety, environmental acceptance and cost efficiency.

Additional challenges lie in creating a treatment system that not only meets the proposed standards, but which is also easy to integrate and ready for shipboard use. Alfa Laval conducted extensive pre-study interviews with shipbuilders and ship operators.

Among the interviewees was Wallenius Marine, a company that has chosen to stay at the forefront by playing an active role in the development of marine environmental equipment. "For us and many other ship owners who have an environmental focus and are strong believers in really looking at long-term operating economy, the fulfilment of basic demands is only a start," says Per Croner, president for Wallenius Marine. Among the projects Wallenius Marine has been involved in was the EU-funded MARTOB Project, administrated by Newcastle University, whose goal was to evaluate different ballast water treatment solutions.

"We conducted tests aboard our vessels as a part of the project and evaluated heat exchanger and chemical solutions for ballast water treatment," says Croner.

"Given the results I have seen from the MARTOB project, I believe the AOT solution is the most potent one.

A reliable solution with good operating economy and no environmental side effects." As shown by Alfa Laval's pre-study, operators and ship owners like Wallenius Marine are also concerned about reliability, since a failure of the ballast water treatment system would make entering port to load or unload impossible. "If the bilge water system fails, you can keep the dirty water in your tanks and deal with it later," explains Croner. "But if this system fails, you are not welcome to load or unload in any port." Alfa Laval's ballast water treatment system consists of two distinct stages. The first is a pre-treatment stage, while the second is the patented Benrad AOT (advanced oxidation technology) which is the heart of the system. Benrad AOT is a technology developed by Benrad AB, a Swedish company with whom Alfa Laval has a cooperation agreement.

Benrad AOT differs substantially from traditional UV (ultraviolet) technology, even though UV light is one of its components. In traditional UV technology, microorganisms are exposed to strong UV rays, which in most cases leads to the destruction of the DNA.

Benrad AOT uses a lower amount of a special UV light wavelength in combination with catalysts to generate hydroxyl radicals, which effectively destroy the microorganism by breaking down the cell membrane.

Despite the advanced science behind Benrad AOT, the Alfa Laval system is touted as being robust and well prepared for the harsh practicalities of the marine environment. During ballasting, water passes through a pre-filter to remove any larger particles and organisms The water then continues to the Benrad AOT unit, which produces free radicals that effectively break down any organisms which have passed the filter.

Sediment buildup in the ballasting tanks is avoided thanks to the pre-filter stage, and any backflushing water is returned to the ocean directly at the ballasting site. During deballasting, water passes the Benrad AOT unit in order to kill any organisms that might have regrown in the tanks during voyage. The filter, on the other hand, is bypassed, leaving no unwanted residuals on board the ship, so as not to produce or discharge any backflushing water.

This way there is no risk of contamination at the deballasting site. Onshore efficiency studies of the solution have been conducted using natural communities of seawater plankton and laboratory-generated algal cultures. The treatment efficiencies measured have been higher than 99% for natural plankton after a storage period. These results, backed up by full-scale studies at sea and combined with the principle of treating water during both ballasting and deballasting, ensure that the system has every ability to meet future IMO requirements and stop the spread of unwanted species. 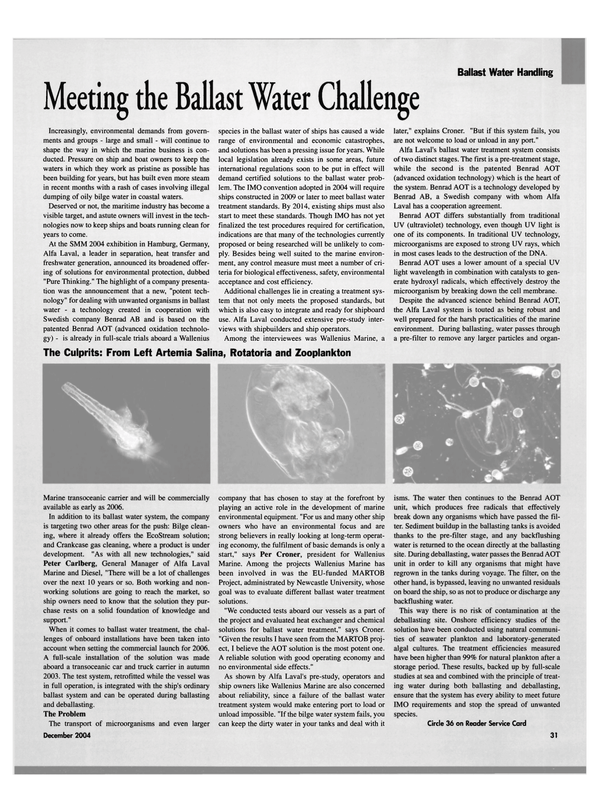 Other stories from December 2004 issue