Knight & Carver YachtCenter, in partnership with M Ship Co. of San Diego, has been awarded a $6 million contract to construct a high-speed 80 x 40-ft. transport vessel for the U.S. Navy. Characterized by its patented, carbon-fiber "double-M" hull - which is designed to provide remarkable stability, maneuverability and a minimal wake at high speeds - the "M Ship 80" will be built by Knight & Carver in approximately eight months, with work expected to start Nov. 1, 2004. The vessel — most accurately described as a large-scale, high-speed test platform — was designed by the marine design firm of M Ship Co., headed by Charles Robinson and William Burns.

The M Ship 80 project has been sanctioned by the U.S. Department of Defense's Office of Force Transformation (OFT) and the Naval Undersea Warfare Center, headquartered in Newport, R.I.

The vessel will be powered by four Caterpillar engines, with an anticipated cruising speed of 40 to 50 knots. It features a unique M-Hull, given that name because its hull consists of two M-shaped hulls adjacent to each other.

"This contract marks a significant step forward for our company," said Sampson Brown, president and CEO of Knight & Carver. "While we have repaired a wide variety of military vessels in recent years, this is the first major military construction project we have undertaken. We are proud to join in this exciting partnership with M Ship Co. and the U.S. Navy." "We're thrilled that the Navy has recognized the world-class partnership we've put together to build a revolutionary ship design that could transform the way the Navy moves on the water," said William Burns of M Ship Co.

In M-Hull vessels, as designed and patented by M Ship Co., the compression of the air beneath the hull creates an air cushion and increases propulsion efficiency by converting wave energy to boat lift. The technology is relatively new, dating back only to 1999, when, based on a newlycreated design by M Ship Co., Knight & Carver built a 65-ft. M-Hull water-taxi for commercial use in the wake-sensitive canals of Venice, Italy.

The vessel proved highly effective in minimizing water damage to the canals and promptly led M Ship Co. to consider similar applications of the M-Hull on both larger and smaller vessels.

As part of its partnership with M Ship Co., Knight & Carver has constructed a demo model of a 40-ft. M-Hull motoryacht. Production of additional similar vessels is expected soon. A smaller, aluminum-hulled 38-ft. prototype, featuring the M Hull with cruising speeds in excess of 40 knots, has been a frequent sight along San Diego Bay in recent months. 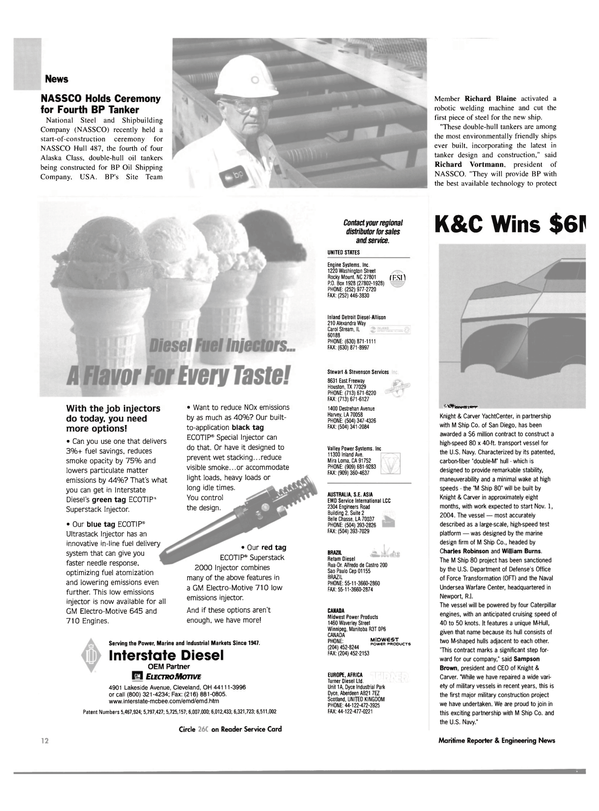