In 1967 a Brazilian ocean freighter delivered 7,000 sacks of unroasted coffee beans to the cargo docks at the Port of Greater Baton Rouge for Community Coffee Company. That cargo was the first of many shipped into the capital city port by the company founded in 1919 by Cap Saurage. In 1968 Community built a coffee roasting plant on leased land at the Port of Greater Baton Rouge and has operated there since. The cargoes of coffee beans stopped arriving at the port's dock years ago, however, when shipping product in large containers became more economical and practical. Since Baton Rouge is not a container ship port, the containers filled with Community Coffee beans have been shipped into other ports, including the Port of New Orleans, and then transported to the Baton Rouge roasting plant by trucks. Recently, Community conducted a test shipment to determine if those containers of beans could be shipped to the port in Baton Rouge by barge rather than moved by truck.

The success of that test, say officials at the Port of Greater Baton Rouge, now gives Community an additional transportation option and more flexibility in moving cargo, while adding another convert to the growing list of area manufacturers who have experienced first-hand the economic and logistic advantages of container-on-barge cargo movement.

"Community Coffee Company has had a great relationship with this port for almost four decades," said Roger Richard, CEO at the Port of Greater Baton Rouge. Two containers loaded with unroasted beans were moved upriver from the Port of New Orleans by barge and unloaded in Baton Rouge at the port's special barge container facility at the Inland Rivers Marine Terminal. The container facility can store up to 250 containers at once and provides loading/unloading/stacking equipment custom-made for barge operations. The IRMT at the port is located off the Intracoastal Waterway and is accessed from the Mississippi River through the Port Allen Locks.

Customs and other inspections.

they are trucked up to the Community Coffee Roasting Plant in Port Allen. Most of those containers have been loaded in Brazil, he said, and arrive in New Orleans aboard ocean-going ships.

Some containers of Mexican coffee also arrived by truck from Laredo, Texas. The green coffee beans are actually the two seeds that form the pits of cherries. The cherry character accounts for the coffee's flavor. Community has been an importer of coffee since the early 1960s. The 85- year-old company is still owned and operated by family descendents of its founder. Cap Saurage.

The company is the largest family owned retail brand of coffee in America. Community is ranked 8th nationally in ground coffee grocery sales according to published IRI market research.

An especially encouraging aspect of the test, said Richard, is that all containerized coffee that now reaches Baton Rouge could be received via barges pushed by towboats plying the Intracoastal Waterway, meaning means that the Inland Rivers Terminal could have the potential for a pretty nice coffee business. So far the container- on-barge terminal in Baton Rouge has attracted local manufacturers who have used it to ship synthetic resins, rice, steel and chemicals, said Johnson. "Adding coffee as a regular cargo would be a nice way to come full circle," he said, "since we used to receive so much coffee here previously. Plus, Community's example could attract other area companies to take a look at the low cost per ton and the higher capacity of barge tows. Just about every type of commodity can be moved by loading containers on barges. That's why the service catches on quickly with just about everyone who really takes a good look at it." Johnson said. 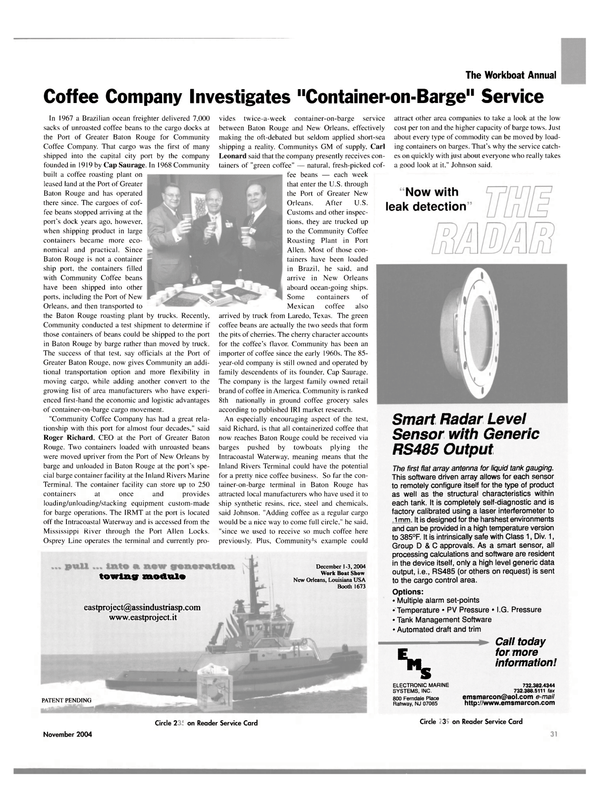