For Those in Peril

Although peacetime losses of submarines through accidents have been few and far between, rarely have sailors survived situations where they have been trapped within a distressed boat on the ocean tloor. The Kursk tragedy in the Barents Sea during August 2000, when all 118 crew perished, was a sad reminder of the risks faced by those who provide a largely unnoticed service to their countries, and of the horrors of being marooned underwater. Some 37 years before, in 1963, the loss of the USS Thresher and all 129 aboard, had stirred similar feelings, and had spurred development of dedicated rescue vessels.

A new initiative involving UK defense contractors, offshore and underwater technology specialists is intended to improve the chances of survival for trapped submariners. The $80 million NATO Submarine Rescue System (NSRS) to be provided and operated by Rolls-Royce is due to enter service at the end of 2006. It will primarily support the three partner nations involved in the project, namely the UK, France and Norway, but will also be on standby to assist any country worldwide, complementing systems operated by the USA, Australia, Italy and Sweden. The Rolls- Royce led team will provide a remotely operated vehicle(ROV), designed to locate the distressed submarine within 56 hours to check for signs of life and furnish emergency supplies to survivors, and will also deliver a three-man operated submarine rescue vehicle(SRV), to bring trapped sailors to safety. The SRV will be able to work at depths of 600 m, some 150-m deeper than the UK's current rescue vehicle LR5, which had been dispatched to the Kursk incident four years ago. The SRV has been developed to rescue 150 survivors, in groups of up to 15 at a time. Within three hours of an emergency call, the ROV. SRV and 12- strong rescue team, on permanent standby at the Clyde naval base in Scotland.

will be mobilized and dispatched to the accident site. Air transportability is an important aspect of the equipment, which can then be put aboard a suitable 'mothership' at a port near the incident.

The standby team will use a mobilization database to identify and track vessels, in the area involved, capable of loading and carrying the ROV and SRV.

Awarded by the UK Ministry of Defense on behalf of the three partner countries, and won in the face of intense competition, Rolls-Royce's contract spans a 10- year term, covering design, build and operational support for the system. As opposed to purely a 'package' of equipment and services, the project signifies the development of a dedicated rescue system from the outset, to function as a truly integrated system. The team that Rolls-Royce has put together includes Perry-Slingsby Systems of York, contributing the SRV and ROV, and The Engineering Business of Newcastleupon- Tyne, as the producer of the portable launch and recovery system.

The SRV will provide the first marine reference for the innovative Zebra battery, well established in electric road vehicle powering applications, including cars, buses and vans. The installation will comprise eight batteries of 17-kWh capacity, to propel and power the SRV.

The exceptionally compact sodium/nickel chloride Zebra battery has almost twice the energy density, in a reduced volume at much reduced weight, compared with the original lead/acid alternatives. The additional energy will enhance the SRV's endurance factor as well as its speed and operability in strong currents. Rolls- Royce signed a 10-year agreement with Swiss firm MES-DEA last year to transfer Zebra battery technology to the marine market. Rolls-Royce is hoping that its overall NSRS solution will attract interest from other countries currently considering the acquisition of rescue systems. The group also has a wide range of UT-Design offshore vessel types capable of fulfilling a 'mothership' role.

Steam Turbine Bastion While the market is presented with increasingly convincing arguments and solutions for alternatives to steam turbine propulsion in the buoyant LNG carrier sector, Kawasaki Heavy Industries has bolstered its extensively proven offering with a more powerful turbine set.

The new UA500 design has been engineered to meet the power requirements of the largest LNG tankers planned or envisioned. 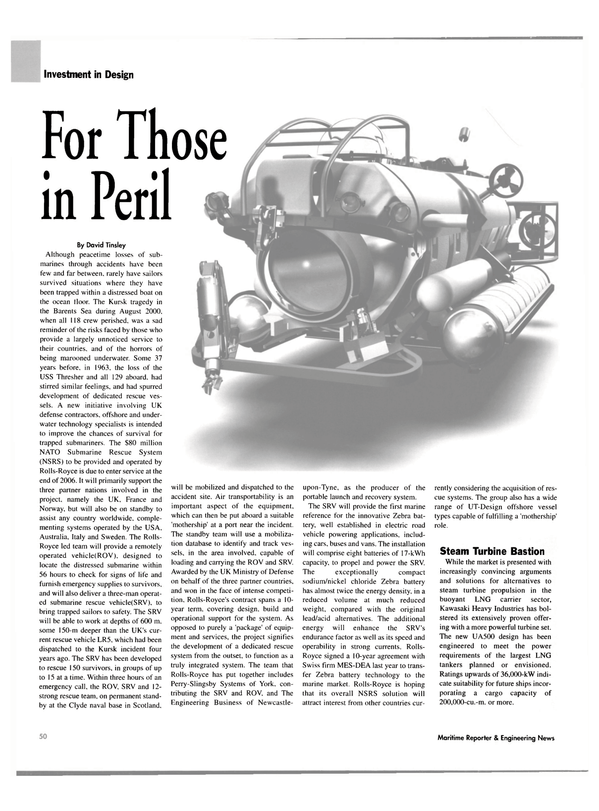 Read For Those in Peril in Pdf, Flash or Html5 edition of November 2004 Maritime Reporter