Independent admeasures 148 gt and has a Load Line based on USA flag registry and USCG rules. Bollard pull is estimated at 135.000 lbs ahead and 130,000 lbs astern.

One generator is normally on line while the other is on standby. In event that the on line generator fails, the switchboard and generator automatically start the standby generator, put it on line, and shut down the other generator.

The Z Drives are keel cooled by a welded channel cooler and the generators are cooled by circulating jacket water in the skeg void.

Independent is outfitted with Schuyler 16-in. laminated "soft loop" bow fender and a 12-in. black rubber "D" fender on the sides and stern. The vessel is equipped with two 1,500 gpm SKUM Fire Monitors, with water and AFFF no/./les with local pick up, and an Aurora model 411 centrifugal fire pump.

Power is provided by a Caterpillar 3406TA pump engine. Deck machinery consists of a Markey electric hawser winch and an Almon Johnson electric capstan aft. It is outfitted with a Siemens machinery alarm system, and all components are completely modular and plug into a single dedicated backbone. 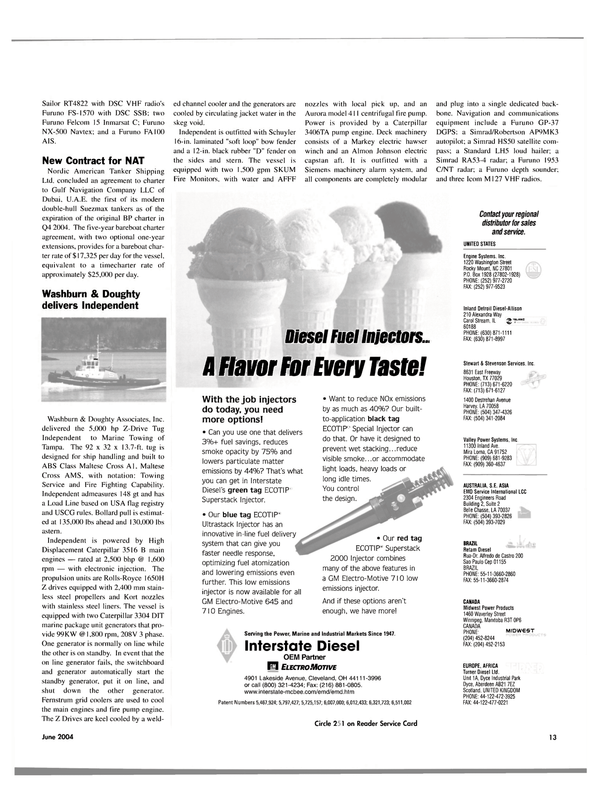