In August 2000, Congress directed the President to appoint a group of experts to study the policy of the United States conwith respect to the oceans and make recommendations for changes. The legislative mandate was broad - covering protection of life and property; responsible stewardship; protection of the marine environment; enhancement of commerce and transportation; expansion of human knowledge; improvement of capabilities and technologies; close cooperation among stakeholders; and U.S. leadership in marine activities. The Commission members were (and are) recognized leaders in a wide variety of marine endeavors. The Preliminary Report of the U.S. Commission on Ocean Policy, at 514 pages, is daunting.

Sadly, it is also incomplete.

The report devotes the vast majority of its length to stewardship of marine resources and protection of the marine environment. These are important issues, and the report makes a number of well-considered recommendations in these respects.

Where the report fails us is with regard to other - more traditional - uses of the sea. The chapter on supporting marine commerce and transportation is a mere ten pages in length. This despite the fact that approximately 90 percent of U.S.

imports and exports travel by ship and that this international commerce is a major contributor to our economic wellbeing.

Federal agencies involved with maritime commerce receive largely cursory treatment. While the U.S. Coast Guard is mentioned various times, the Maritime Administration (MarAd) is referred to only three times, and then more in passing than anything else. The Federal Maritime Commission (FMC) is never discussed in the report, even though it is charged with regulating the international liner trade to and from the United States.

While the report contains a compre- hensive discussion of such things as off- shore wind energy projects, it totally fails to mention issues related to con- struction of onshore and offshore liquefied natural gas (LNG) terminals for the import of this important fuel. Alan Greenspan. Chairman of the Federal Reserve, has cited construction of these terminals as in the vital interest of the nation. Such construction involves large financial commitments, impacts other marine uses, and has a variety of environmental and safety considerations.

Yet, the report ignores LNG completely.

Even though the federal government faces immense difficulties in scrapping or recycling its numerous excess and obsolete ships, the issue is totally ignored in the report. The United States Government is involved in litigation on this issue in this country and awaits official action in the United Kingdom on four obsolete ships exported there last year. The several hundred mothballed ships, some of which may present environmental threats, await a policy decision and monies to implement the policy, yet the report stands silent.

Submarine cables are barely mentioned in the report, but modern communications depend heavily on their use.

New cables need to be laid on the ocean floor and come ashore at appropriate locations. Competing users, primarily fishermen, generally oppose laying of new submarine cables. There is a need for a coordinated federal policy on submarine cables, yet the report neglects to address the issue.

Minimal discussion is devoted to the pressing need for major improvements in port infrastructure in the United States. Our current port facilities are generally outdated and stretched to capacity. All indications are that maritime commerce will double in less than 20 years. We desperately need upgraded terminals to handle all the ships and their vital cargoes. We also need vastly improved access routes in order to move cargoes to and from the ports. The Alameda Corridor in Los Angeles/Long Beach has proven immensely successful in this regard, but no similar projects are currently planned for other ports.

The report includes a good summary of the need for places of refuge and a process for responding to requests for access by ships in distress. It discusses the problems encountered by the oil tanker Castor in the Mediterranean Sea in 2001 when it was turned away by numerous littoral states, as well as the recent guidelines issued by the International Maritime Organization (IMO) to address future cases. The report, though, fails to mention that the issue is heavily impacted by the International Convention relating to Intervention on the High Seas in Cases of Oil Pollution Casualties, 1969 (Intervention Convention) and the U.S.

implementing legislation. Until the Convention and statute are amended, little progress is likely with regard to places of refuge.

The report devotes great length to ship-source pollution and that problem deserves continued attention. But, the report fails to acknowledge that the majority of pollution entering the oceans originates ashore. The discussion addresses shore-based pollution, but the number of pages devoted to this issue gives the uninitiated the impression that the problem is relatively minor. Better balance is desperately needed here so that resources can be assigned to the real problem areas, not just to politically easy targets.

In order to boost the visibility of ocean policy within the federal government, the report proposes a complex structure of advisors, councils, committees, and panels. Personally, I find the proposed structure off-putting and counterproductive.

Strengthening and fully funding the agencies charged with important missions relating to the oceans will go much further toward actually achieving the goals than establishing yet another bureaucracy. The report includes important recommendations for enhancing the role of the National Oceanic and Atmospheric Administration (NO A A). These enhancements (and the funds necessary to bring them to reality) are vital. The other agencies involved in ocean matters (such as the Coast Guard, the Environmental Protection Agency, the U.S. Army Corps of Engineers, Customs and Border Protection, MARAD, and the FMC) also deserve better treatment than they usually receive from the Administration and Congress. These agencies are filled with dedicated and hard-working employees and members who generally know their roles very well, but lack the resources needed to reach their goals. Overall, the Preliminary Report of the U.S. Commission on Ocean Policy is an impressive document and contains many excellent recommendations. It deserves careful consideration by all stakeholders, including the President, Congress, the various federal agencies, state and local officials, the maritime community, environmental advocacy groups, and citizens at large. It is not, though, a full picture of ocean issues. It is one, albeit important, building block for use in establishment of a comprehensive national ocean program. 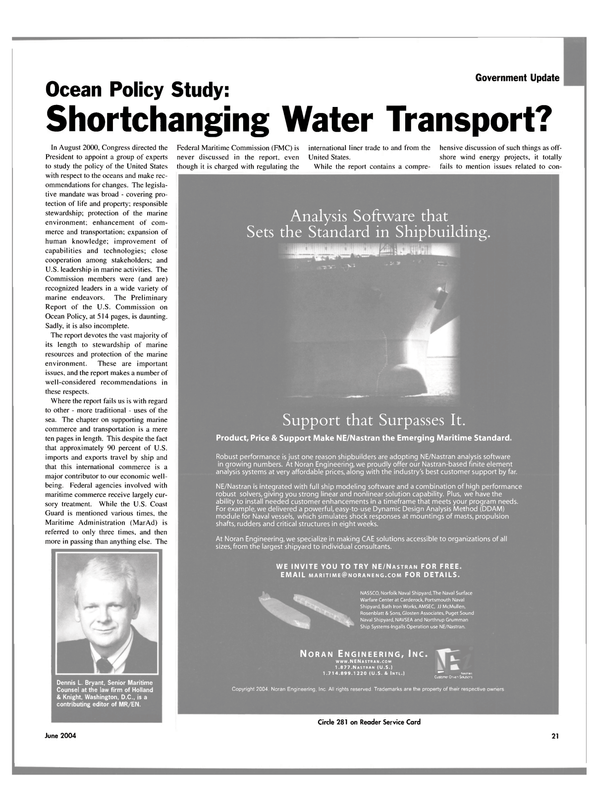