Like so many areas of our economy since the terrorist attacks of September 11, the port and maritime areas of the United States are being scrutinized for vulnerability to terrorism. Catastrophic scenarios are all too easy to imagine, and the threats can come from so many directions. To illustrate the complexity of the maritime law enforcement challenge, the Coast Guard Commandant, Admiral James M. Loy, posed the following hypothetical in an October 31 speech to the Propeller Club of the United States: "Imagine for a moment the information requirements associated with a hypothetical 6,000 TEU flag-of-convenience container ship with a multi-national crew cobbled together by a hiring agent who works for an Algerian vessel operator who chartered the vessel from a Greek ship owner whose corporate offices are in the Cayman Islands.

"How would you begin to manage the information required to prosecute an inter-agency response to any of the various threats that might be aboard such a hypothetical ship — a report of a nuclear device being smuggled, chemical or biological agents, or any of hundreds of other possibilities?" The purpose of this article is to report on activities within the U.S. Congress aimed at shoring up security in the Nation's ports and maritime areas. At present the main port security bill is S. 1214, the Port and Maritime Security Act of 2001, introduced by Senator Ernest F.

Hollings, Chairman of the Senate Committee on Commerce, Science, and Transportation, which has jurisdiction over the Coast Guard and Maritime Transportation.

Senator Hollings, whose hometown is the port city of Charleston, S.C., introduced an earlier version of the bill in July of last year in response to the 1999 report of the Commission on Seaport Crime and Security. S.

1214 was reported by the Senate Commerce Committee to the full Senate three days after the September 11 nightmare, and the changes to the bill since then have been considerable, with particular emphasis on dealing with the terrorist threat. As Congress left for its Thanksgiving recess, Senators and staff were still negotiating changes to the bill. However, it is expected to pass the Senate before the end of this year.

Provisions in the Hollings Bill The Hollings bill reinforces and expands upon the Coast Guard's Maritime Domain Awareness concept, which stresses constant vigilance and collaboration among affected public and private organizations. The bill has a number of provisions to enhance the security preparedness of federal, state, and local government agencies having responsibility for seaport security, as well as private entities with a stake in secure port operations.

For coordination, it calls for establishing a national-level Port Security Task Force, whose members are to include representatives of the Maritime Administration and Coast Guard, port authorities, and labor and management organizations involved in maritime transportation, and requires port security committees for each port, with membership from governmental and private entities.

Another step in preparedness under the bill is a requirement for the Secretary of Transportation to identify the 50 most strategically important and economically important ports in the United States. The Secretary would then be required to complete port security vulnerability assessments for these 50 key ports. Vulnerability assessments would be carried out for the other 250-plus U.S. ports as well, but the greatest urgency is assigned to the top 50.

The Hollings legislation recognizes that terrorism and other threats require vigilance not only from law enforcement agencies. Under the bill the port authorities and private waterfront facility operators will have to develop their own maritime transportation security plans, which must be approved by the Secretary of Transportation. These non-law enforcement plans would include provisions to impose positive access controls to vessels and facilities, to develop procedures for processing passengers, cargo, and crewmembers, and to promote security awareness among all employees.

To round out the security readiness of individuals in the maritime community, the Hollings bill would: (1) establish a training and certification program for maritime security professionals and a Maritime Security Institute to train these professionals, (2) direct the creation of domestic and maritime safety and security teams for responding to terrorist or criminal activity, and (3) require regularly updated maritime counter-terrorism and incident contingency plans.

The Hollings bill recognizes that the information on port activities falls far short of what is needed for security from terrorism. One way to improve is to combine the information that is collected throughout the Federal government, but often not shared among agencies.

Thus the bill would require a maritime domain awareness report by the Secretary of Transportation, aimed at improving the utilization of worldwide maritime transportation information systems and data bases to track cargo, passengers, and crew manifests, identify suspicious itineraries and shipments, and identify suspected terrorists - possibly through a linked or new general data base. Likewise, the bill requires the Attorney General to direct U.S. law enforcement agencies to modify their information databases to ensure collection and retrievability of port data.

Another way to improve information in the maritime domain is to collect more information through the use of technology. The bill provides for loan guarantees and grants for security-oriented infrastructure in U.S.

ports, including the acquisition of equipment or facilities to be used for port security monitoring and recording, remote surveillance systems, and concealed video systems. Further, it authorizes $35 million per year in funding for the Customs Service to acquire non-intrusive screening and detection equipment for use at U.S.

In addition to these technological devices, the bill relies on new reporting requirements. One provision would require the Secretary of Transportation to prescribe regulations governing the conduct of criminal history record checks with respect to security-sensitive personnel to ensure that these personnel do not pose a threat to the security of maritime commerce.

Another provision strengthens existing pre-arrival notification and vessel information requirements for ships bound for U.S. ports, allowing the Coast Guard to deny entry to vessels failing to provide electronic notifications and prescribed shipboard information in a timely manner. The bill also provides specific authority to the Customs Service to require detailed electronic information from shippers, marine terminal operators, and vessels for the purpose of tracking cargo, passengers, and crewmembers.

One of the main frustrations for those seeking to protect U.S. ports is the lack of information on cargo arriving from other countries in sealed containers.

The Hollings bill addresses this by urging the U.S. Government to push international organizations like the International Maritime Organization to adopt international port security standards and a system of private sector accreditation of international ports that comply with these standards. In addition, the bill directs the Secretary of Transportation to establish a program to assist foreign port operators in the identification of port security risks, the conduct of vulnerability assessments, and implementation of security standards. And the bill requires the Secretary to work with the Attorney General and Secretary of Defense to identify the foreign ports whose inadequate security or port security vulnerability poses a strategic threat to U.S. defense interests or may contribute to criminal activity in the United States.

Conclusion If the Senate passes S. 1214, as now expected, it will signify the completion of one major phase in the development of port and maritime security legislation.

The next phase for this legislation will be in the House of Representatives and probably will commence with the Transportation and Infrastructure Committee, which has jurisdiction over the Coast Guard and maritime transportation.

The staff of that committee has been discussing a bill focused on the specific needs of the Coast Guard. That bill may be introduced before the end of this year, but most likely will surface early in 2001. 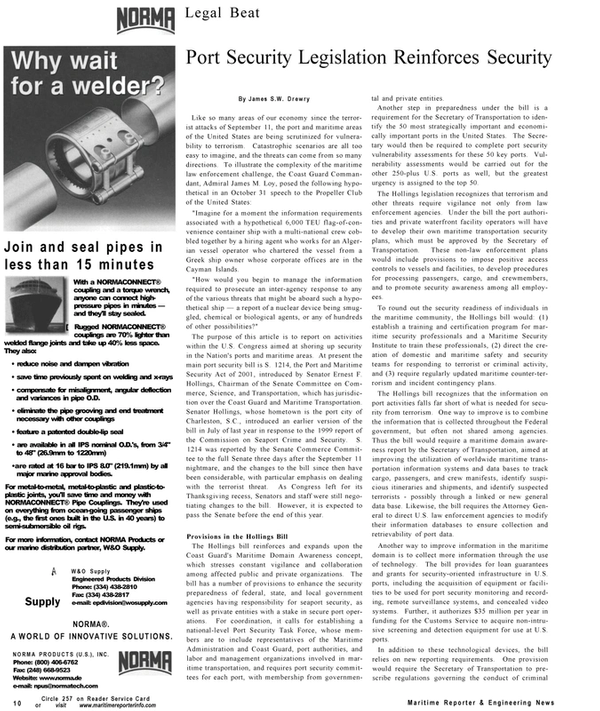