In addition to these new innovations, the vessel offers passengers more than 70 percent of outside cabins, serviced by more than 1,100 crew members. Star's diesel electric podded drive and an interactive communication systems, provide passengers with the utmost in cruising technology.

Subsequent to its delivery, Star departed the Dutch port of Eemshaven for its homeport of Miami, Fla. The vessel will then depart on its maiden voyage from Miami to Los Angeles, Calif., followed by its first standard voyage from Hawaii on December 16. The vessel will service off Hawaii operating seven-day cruises in the Pacific isles.

Built to Det Norske Veritas classification, Star was designed in close collaboration with its owners and optimized via computer calculations and model tests.

The vessel's 15 decks as well as its podded drive ensure outstanding maneuvering and sea-keeping characteristics in addition to low sound and vibration levels.

Divided into seven main fire zones, Norwegian Star complies with the rules of a two-compartment vessel and is designed in accordance with the latest IMO regulations. The vessel holds six tenders and 14 lifeboats as well as two fast rescue boats. In addition, six socalled marine evacuation systems have been installed in case of emergency via fast evacuation chutes.

Four diesel generators with a 14,000 kW output each are provided for power generation. The MAN B&W type 14V48/60 diesel engines can be operated both with diesel oil and heavy fuel oil. The generators, which are supplied by ABB, provide a voltage of 11,000.

The vessel is propelled via two azipods with an output of 20,000 kW each - providing exceptional maneuvering capabilities via a 360-degree efficiency. The new propulsion system also ensures stable stable and quiet seakeeping characteristics and an extremely low vibration level on board.

The vessel's integrated bridge system type NACOS 65-4 is supplied by STN Marine Electronics. This system includes all components, ensuring safe navigation. Main components are two multi pilots, which allow the radar screen, the electronic sea chart and important data of the ship to be displayed via one monitor. 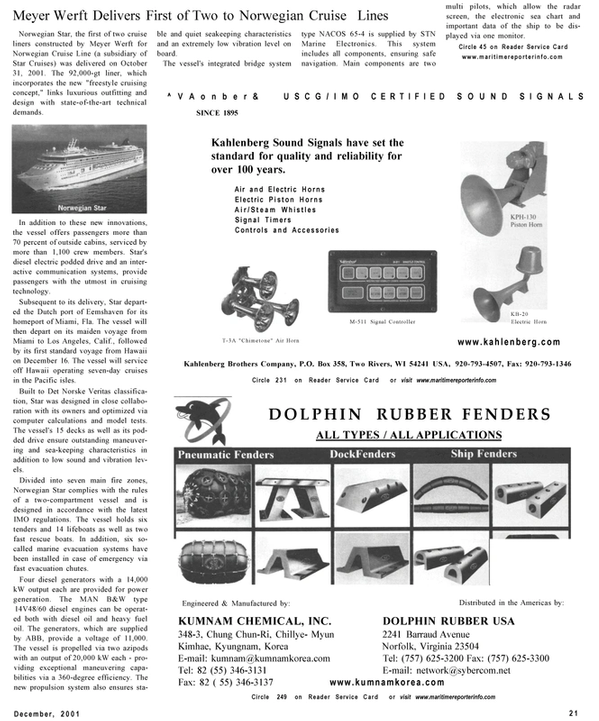