Royal Caribbean's Adventure of the Seas Arrives In N.Y. Harbor

A clear, sunny Saturday afternoon of November 10, set the stage for the arrival of the first passenger ship into New York Harbor following the September 11 terrorist attacks. The vessel, Royal Caribbean's Adventure of the Seas, sailed into New York for a two-day tribute cruise for the families of the fallen firemen and police officers who were victim to the devastation at the World Trade Center. Royal Caribbean also plans to donate $50,000 to the Twin Towers Relief Fund.

The 142,000-ton Adventure of the Seas - sister ship to Voyager and Explorer of the Seas - was christened at Pier 88 and named by representatives of the New York Police Department and New York Fire Department. The vessel's godparents were Maggie McDonnell, widow of police officer Brian McDonnell; Tara Stackpole, widow of firefighter Captain Timothy Stackpole; fireman Kevin Hannafin, who lost his brother, fireman Tom Hannafin; and Sgt.

McAllister were also part of the procession, but left Adventure of the Seas to escort an ACL containership.

This Post-Panamax size has allowed both unique designs and interior solutions to be implemented onboard Adventure of the Seas. The vessel features a four deck high horizontal promenade — the Royal Promenade — a premiere design on this ship series. Measuring approximately 394 ft. (120 m), the promenade has an 11 deck-high atrium at each end.

Scheduled to perform its first sevenday cruise on November 18 to the Southern Caribbean, Adventure of the Seas was constructed to Det Norsk Veri- tas classification, and was designed by a variety of architects, namely Nijal R. 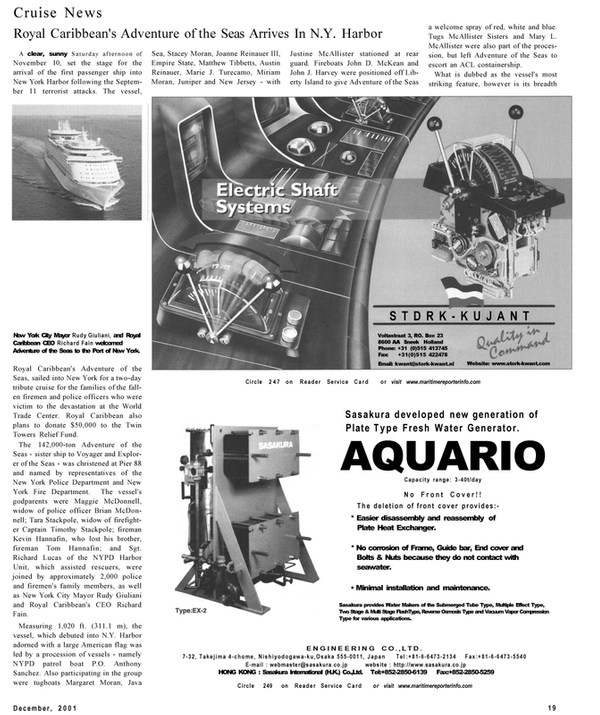