On Tuesday, November 20, a major announcement shocked the cruise and financial industries when Richard Fain, chairman and CEO of Royal Caribbean Cruise Lines, and Peter Ratcliffe, CEO of P&O Princess held a press conference in London to report that their two respective lines would join forces to form the world's largest cruise line, in a deal worth more than $6 billion. MR/EN had the opportunity to dial in to the conference, which occurred the morning of the merger at London's Lincoln Centre, to provide a firsthand account of this monumental transaction.

By Regina P. Ciardiello, senior editor In an era filled with terrorism, turmoil, economic frustration, massive layoffs and steep cutbacks, two companies, with two distinct brands announced to the world on November 20 via a press conference from London's Lincoln Centre, that they would join forces to form a new corporation with an estimated worth of $6 billion. Royal Caribbean Cruise Lines (RCCL), which has recently shed hundreds of employees, (not to mention the departure of Rick Sasso, president of its subsidiary Celebrity Cruise Lines), has entered into a "merger of equals," (according to chairman and CEO, Richard Fain), with P&O Princess Cruise Lines The new conglomerate, which has tentatively been dubbed RCP Cruise Lines, will control 41 vessels and approximately 75,000 berths, including the RCCL and Princess brands, as well as Celebrity, P&O Cruises, Swan Hellenic, AIDA and A'Rosa. In addition, four vessels are scheduled to be added in the next three years. The combination is also expected to provide a significant cost savings, estimated at approximately $100 million on an annualized basis — 12 months subsequent to completion. With an average age of six years, the fleet will hold the world's largest ships, and will more than likely leave executives at Carnival Corp., which up until this merger held the distinction as the world's largest cruise line, with some re-evaluating of its financials and fleet capacity.

Operated as a combined entity, the new company will be, according to Fain, "a merger of equals using dualistic company structure." Fain added that the new entity provides "the benefits of the combination of a unified board, unified management and unified financial results, while still being able to keep independent listings on the exchange. (Royal Caribbean is currently listed on both the Oslo and New York Stock Exchanges, while P&O Princess is traded via the London Stock Exchange).

The newly equal company, of which RCCL holds a 49.3 percent share, with P&O checking in with 50.7 percent ownership, will be headquartered primarily in Miami, Fla., with one office in London as well. It will be headed by Fain as chairman and CEO and Ratcliffe and managing director and COO, as well as a 12-member board of directors and 10 non-executive directors; the transaction is expected to close (following regulatory clearances), by the second quarter of 2002.

According to Nick Luff, who currently serves as CFO of P&O, "regulatory approvals should be complete within the next six months, following competitive clearance from the U.K. and Germany." He added that operations will then be expected to commence by 2003, providing that "certain milestones are met by this time." If, however a mutually beneficial agreement cannot be agreed upon, Luff contended, "In theory, we (P&O Princess) could terminate the agreement." Targeting A Market Base With a combined order book of 14 vessels, the new $6 billion company will have an EBITDA of $1.3 billion and an estimated net income of $600 million, and plans to target customers in traditional strongholds such as the U.S. as well as southern Europe — specifically Spain, France and Italy. When operations begin in 2003, four new vessels (split evenly between the two lines) will be deployed in these demographics. The four vessels, which are scheduled for deliveries between 2003 and 2004, will provide an asset base for the new company in excess of $2 billion.

"Southern Europe is the fastest growing market," Ratcliffe said. "Therefore there is a tremendous opportunity to capitalize on that growth." He added: "This will be a global company that will take advantage of every cruise market that exists in the world today." While Fain and Ratcliffe will head up the new corporation, an executive for this new brand that will target Southern Europe is actively being sought. While both Fain and Ratcliffe would not elaborate on whom they would like to head up this new entity, Ratcliffe did mention at the press conference that an executive of European descent would more than likely be tapped for the position. "We will be moving quickly to appoint a CEO and we intend to have him as a local of European nationality because it is important that he understand the product base," Ratcliffe said. "Our goal is to operate separate brands with good product differentiation and good brand dif- ferentiation." Fain added, "There has been a strong resurgence in demand for cruise vacations in North America as travelers recover from the events of September 11," Fain said. "We wanted to address the Southern European market and these four ships will be a thoroughly dramatic way of doing so." The merger, which Fain has dubbed a "natural link of two companies," has been in the works since 1991.

According to Fain, the two companies began talking again, ironically on September 11, about how they could masterfully bring their brands together. Surprisingly, there were no plans of getting involved with Micky Arison's cruise powerhouse Carnival Corp., which in recent years has garnered the reputation of its reorganization of cruise lines, (namely Holland America and Cunard), which would have probably filed Chapter 11 had they not been "rescued" by Carnival. According to Ratcliffe, both RCCL and P&O Princess had their reasons for not getting involved with powerful cruise line. "We have not had any discussions with Carnival," Ratcliffe said. "A combination with Carnival for virtually anyone in the industry is problematic because of anti-trust issues." 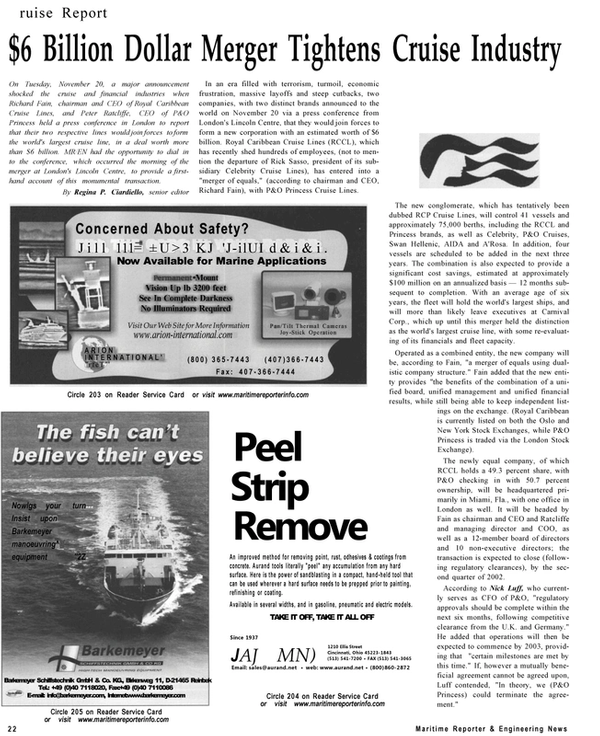