Safe, fast and efficient vessel evacuation has long been a top concern of the marine industry, a fervor sure to be renewed with vigor in the wake of last month's terrorist activities in the U.S.

and heightened securities being formulated for all transportation industries.

New research being carried out by British Maritime Technology (BMT) and the University of Greenwich could give ship designers and owners vital new information on how humans react when evacuating from ships. The hope is that this unique study will help to prevent future shipping disasters, helping to save thousands of lives.

Transport Canada commissioned BMT's affiliate, Fleet Technology to develop a ship evacuation simulation program. To collect and record data on how people behave when evacuating from a ship, they designed and constructed a purpose built experimental facility. The facility has been named SHEBA (Ship Evacuation Behavior Assessment) and the first tests began last month at Fleet Technology's Kanata laboratories, using hundreds of volunteers of different ages and backgrounds.

"This facility is the first of its kind large enough to measure group movement, enabling us to collect quality data.

For example, the passageway is long enough to allow faster people in a group to overtake, and to permit us to study behavior of two groups heading in opposite directions," said Ian Glen, president of Fleet Technology Ltd and SHEBA project director.

SHEBA is being used to measure the mobility of people moving in a typical ship's passageway and up and down stairs at angles up to 22 degrees.

Sophisticated modeling techniques will combine the observed studies of human performance and behavior with ship lay- out and system performance.

Using the results from the SHEBA study, Fleet Technology Ltd. is working in partnership with the University of Greenwich to develop a new generation of ship evacuation simulation software called maritimeEXODUS. This tool enables marine designers and inspectors to assess the effectiveness of evacuation procedures, as well as provide design recommendations for new ships. Both hope that the research will be completed in the next few months and plan to launch maritimeEXODUS this autumn.

"maritimeEXODUS will be the ship evacuation and passenger modeling program against which all others will be measured. Its pedigree, and the fact that it is being offered through a leading marine engineering company who truly understand the industry's issues, backed by a full time research and development staff at the University of Greenwich make it totally unique," Glen said.

As a nation with one of the world's largest ferry fleets and with a range of passenger vessels from small ferries to cruise ships calling at its major ports.

Canada has a direct interest in effective evacuations. Canada is working with the International Maritime Organization and other nations to improve ship evacuation methods and developing tools for assessing the suitability of designs. 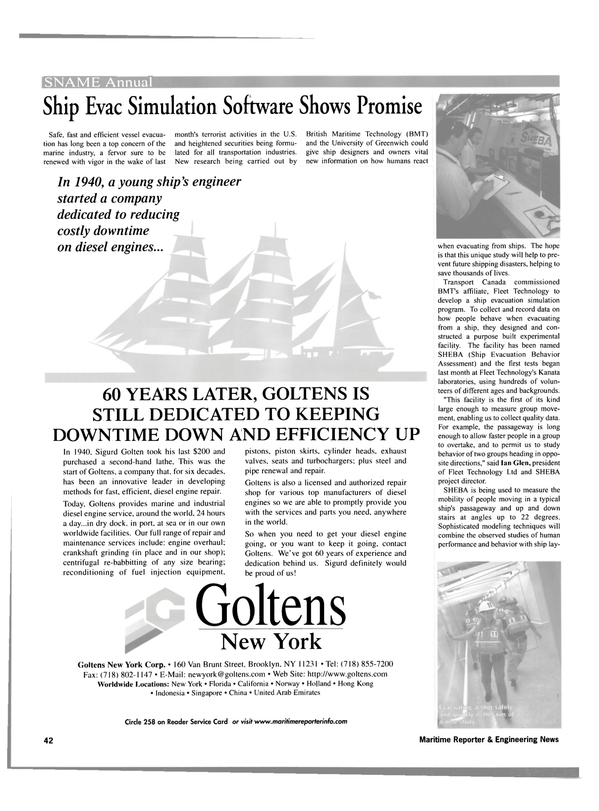