A concept design for a new inland containership — dubbed Waterborne Container Carriers (WCC) — was completed and released by DeJong & Lebet, a project that was completed for Venture Capitol Investors LLC, which owns a patent on the concept.

The full load draft of the vessel varies from nine ft., unballasted, to 12 ft. ballasted.

The ballast is also used to maintain draft when the container load is light. The vessel's propulsion system has raising and lowering capability for shallow draft upper river operations.

The WCC is capable of carrying 566 40-ft. containers, or 1,132 TEU. The design can be modified to have some sections of the vessel set up for longer/higher boxes. The containers are stacked five high, with two levels in the hull and three levels above the main deck.

The WCC features a pair of 550 hp bowthrusters by Schottel. The thrusters are powered by CAT 3406 E engines.

The WCC is designed for U.S. Coast Guard Certification under Subchapter I.

A preliminary manning analysis indicates a crew requirement of approximately 15. The vessel is designed with accommodations for 17, but could be easily expanded for 20 or more. The design also features a forward pilothouse and accommodation area, with aft machinery and engineering accommodations.

The vessel is designed to be constructed of welded steel. The design standard used is ABS Rules for Rivers and Intracoastal Waterways. 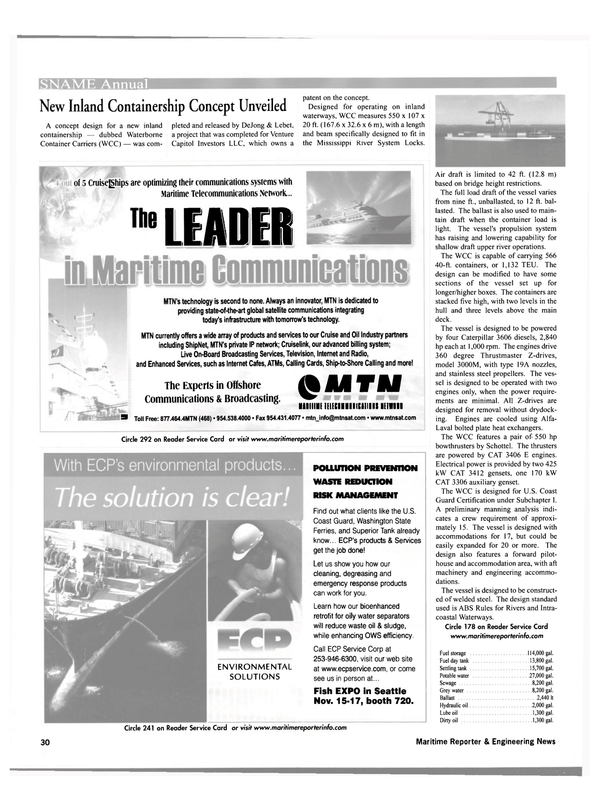