The Miami-based owner of Holland America, Cunard and four other cruise lines said profits were SI87 million, or $0.32 per share, for the three months ended May 31, compared with $204 million, or $ 0 34 per share, a year earlier.

Industry analysts had forecast that Carnival, whose 45 ships dominate the $12 billion global cruise market, would earn between $0.28 and $0.33, according to a survey of 19 analysts by Thomson Financial/First Call. The analysts' median estimate was $0.30.

Revenues were $1.08 billion, up from $875.1 million a year earlier, as Carnival added ships in a massive, sectorwide fleet expansion analysts partly blame for weak cruise ticket pricing. The slowdown in the U.S. economy is also dragging demand for cruises.

The company, described as "reasonable" analysts' estimates for the full fiscal year ending in November. The company gave no figure, but First Call's mean full-year estimate for Carnival is $1.65 a share, or a penny more than last year.

The company reported that net yield, a measure of revenue per passenger closely watched by Wall Street, had risen 1.8 percent in the quarter over the same three months in 2000. Chairman Micky Arison said yields were likely to be down two to three percent over last year in the six months to November.

"In spite of the continuing weak economic environment, we were still able to achieve strong growth in the operating earnings of our cruise brands," Arison said.

"A combination of an 8.4 percent increase in capacity, a 1.8 percent increase in net revenue yields (revenue per available berth day), and lower operating cost per available berth day helped to drive the growth in our second quarter operating earnings." Operating income, including the consolidation from the company's Costa Cruises based in Italy, rose 20.2 percent in the quarter to $241.1 million from $200.7 million.

Arison said slow economic growth in the United States was still weighing on cruise ticket prices, especially for the company's most expensive lines such as Seabourn. More modestly priced lines were a bright spot, he said.

Carnival, whose lines also include Windstar and Carnival Cruise, announced in May that it was selling for approximately $500 million a 25 percent equity stake in Airtours pic. 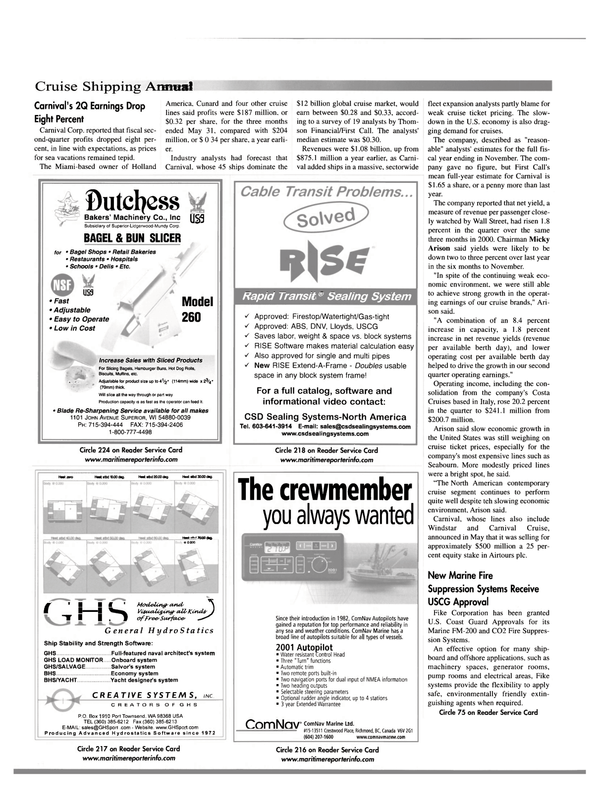 Other stories from July 2001 issue