The North American inland marine market is neither technologically archaic nor as environmentally hazardous as many individuals outside of the marine market may think. These two issues dominated a recent meeting sponsored by the Ship Operations Cooperative Program (SOCP) held in early March at the Litton-Avondale Shipyard. The profitable process of moving products through North America's vast inland waterways systems is increasingly dependent on vessel owners and operators finding and incorporating new technological means and methods to increase efficiencies. Speakers from industry leading companies such as Kirby Barge Co.; Ingram Barge Co.; Canal Barge Co.; and American Waterways Operators (AWO) dominated the day, and gave presentations meant to dispel some commonly held notions as well as update on the market's collective move to technological solutions.

According to AWO's Ken Wells, market expansion projections are flat both in terms of materials moved and the overall customer base of shippers. Thus, the onus is on owners and operators to ensure that their fleets are adequately outfitted to save precious time, money and fuel. While Wells stressed that the inland market must continue to find more and more efficient means to move cargo, he admitted that the industry and the technology already incorporated remains the industry's "secret," as many outside of the maritime market don't "understand or acknowledge investment in technology of a transportation mode that can take days or weeks." While the need for a technological infusion is evident, nearly all speakers echoed the sentiment that the inland industry is in dire need of a good publicity boost. As most industry insiders already know, the focus on marine transportation is usually connected to an accident, garnering the owners and operators a disproportionate share of "bad press." The owners are hoping to craft and transmit a new message and image, one that focuses on the many positives in the inland marine industry, such as the fact that the marine industry boasts, by a wide margin, the lowest air emission per ton of cargo moved, and that the industry has in place (thanks in large part to OPA 90) the most comprehensive oil spill containment and cleanup program of any transportation mode.

Ingram Barge Co. Goes High Tech "What can we do to get these vessels up and down the river quicker?" That is the first question asked by Mark Stevens, Ingram Barge Co., when evaluating any new and/or improved technology for installation on his company's fleet. Stevens is responsible for ensuring that the privately held company's fleet, which includes 62 operating vessels and 1,800 barges, cost-efficiently incorporates the latest technology designed to ensure safe and profitable operations. He notes that GPS and electronic charts are two of the more dramatic changes in technology to hit the inland waterways, but admits he is not yet sold on the exact electronic chart package to select. He notes, for example, that the current electronic chart offerings vary substantially in both appearance and format, saying that, for example, some systems are North-up instead of Course-up orientated. The company, as it turns out, was interested in a package with provided Course-up, making it easier, he claimed, for its captains to quickly decipher and utilize.

Beyond the navigation realm, however, Stevens admits that information — particularly the ability to gather and disperse real-time information increasingly faster and more efficiently — is the cornerstone to running a profitable fleet.

The company currently utilizes a satellite communication system, moving an estimated 600,000 characters of data through the system every morning.

Stevens sees the push toward vesselbased transponders and VTS as a potential boom for gathering and disseminating information. He said that while the primary focus regarding transponder use today is safety, he would like to see the technology expanded to allow for the barge fleet to automatically transmit positions and logs, allowing the cus- tomer to dial in and use it as well.

Kirby Focuses On Training & Edu As the number of marine accidents continues to multiply, both in the brown and blue water environments, it is evident that technological solutions are not the sole answer to a complex problem.

Greg Binion, vice president Canal Operations, Kirby Barge Co., helps to oversee the personnel responsible for the operation of more than 230 towing vessels and 700 barges. Binion notes that the methods of training vessel crew have changed dramatically, particularly in the past 10 years. In 1990, he said, most crew training occurred on the vessel, while today the well-rounded program includes classroom, simulation and onboard training. In fact, Kirby Barge employs 16 full time staff and eight instructors in its dedicated training center.

Noting that a canal wheelman earns around $70,000 per year, and a tankerman approximately $40,000. and the fact that financial liability for mistakes is going nowhere but up, he said that it is increasingly important to provide the training and educational facilities to ensure that the crew is trained correctly the first time, but also has a resource to help further their careers, thus helping to improve employee retention. To this end, Kirby offers "next level" training such as management courses and advanced tankerman training. "Most wheelmen don't have formal management training, and Kirby is compelled to provide it." Binion said. In the case of advanced tankerman training, the company is helping to protect its own assets as well. The goal of this course is to reduce spills — spills that would cost the company dearly in terms of both money and image. However, the company has also found that after about 18 months on the job, a certain degree of job complacency sets in, and the course is timed to ensure that this critical position is filled with qualified individuals who are acutely aware of the latest techniques, and ramifications for not following them. 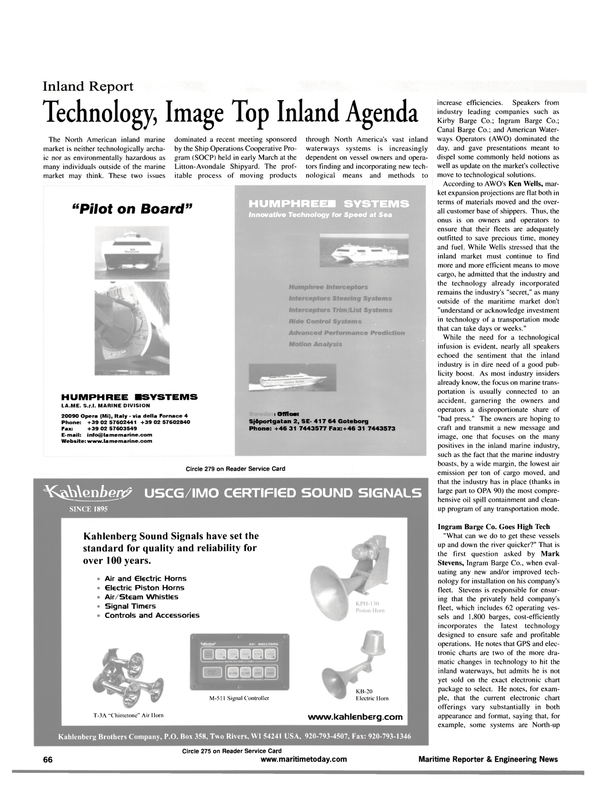 Other stories from April 2001 issue