A Leg Up on the Competition

To Tim Domke, the new MA' Dixie Legacy (pictured on the cover), is much more than simply the largest, most advanced lift boat in the world.

To Domke, the Dixie Legacy is personal, the culmination of a career built sailing onboard these unique vessels with the last four years spent shoreside, overseeing the construction activities at Semco Shipyard for Power Offshore Service of Belle Chasse, La.

Semco recently completed a 250-ft. (76.2 m) leg lift boat for Power Offshore Service, the first in a series of lift boats under construction for the company. Dixie Legacy features a number of technical innovations and amenities that should secure its profitable and successful future for many years to come.

While the vessel offers many innovations both seen and hidden, its greatest assets are immediately evident upon first laying eyes on the boat: its cranes, its deck area and its legs.

Dixie Legacy — measuring 225 x 103 ft. (68.5 x 31.4 m) — is the first vessel of its kind to be equipped with two Seatrax Model LM 10520 marine cranes, one mounted on each of the vessel's forward leg support structures. Each crane is rated to lift 175 tons (although if stationed shoreside, that rating would likely jump to about 250 tons) and is equipped with a 120 ft. boom. The unique mounting arrangement allows each crane to rotate 360 degrees, a feature which Domke said significantly enhances the vessels lifting capability and flexibility.

The vessel's main deck space compliments the tremendous lift capacity by offering a monstrous 8,200-sq.-ft. of usable work area, an area that in total measures about 10.000 sq. ft. Dixie Legacy will have a variable deck load up to 750 Kips, while Dixie Endeavor, its sister vessel due for delivery in December 2001, will have a variable deck load capability up to 1.500 Kips.

Finally, Dixie Legacy's legs make it unique as, with zero sea floor penetration, the vessel can operate in 180 ft. of water with 40 ft. of clearance above the surface.

Each leg is 8.5 ft. (2.5 m) in diameter and 250 ft. (76.2 m) long. Due to the legs' extra long length, the interior support structure is similarly reinforced to ensure the long-term structural integrity. To ensure the vessel's efficiency in operation, Domke notes that Hydra Craft Pumps from Rolls-Royce are used to power the jacking system, enabling that the vessel gets up and down smoothly and efficiently, via the simplicity of a variable speed joystick control. In addition, each leg is equipped with a jetting system, and each will also be outfitted with water infiltration alarms.

Behind Closed Doors While the essence of the vessel as an asset in the oil fields is embodied by the capabilities mentioned above, the soul of the vessel is evident in the detail demanded by Domke and crew. Dixie Legacy will be used as a support platform from which various oil and gas industry activities can be performed, activities such as coiled tubing, hydraulic snubbing, nitrogen stimulation, drilling, plug and abandonment, construction, facility installation or removal and diving.

Able to accommodate 50 and feed 36 at one time, Domke notes that the vessel houses a real community, a community of individuals that increasingly demands evident and subconscious amenities that are designed to make the vessel appealing and productive. For example, flooring of all "wet" (pantry, bathrooms, bath, laundry, etc.) areas is poured epoxy resin instead of tile. He notes that tile is more apt to come up over time, presenting a situation, which is not only aesthetically unappealing, but relatively labor intensive to replace, whereas the epoxy resin floor is considered more durable and can be repaired easily and quickly.

In the galley, the owner decided to use freestanding Cospolich freezers and refrigerators rather than the walk in freezers previously chosen. Domke noted that the walk-in units have the tendency to rot out after 12 to 14 years, and can pose quite a challenge to replace and/or repair.

In the accommodation areas, red oak furniture was selected to give off a more modern look, and privacy curtains are supplied for all berths in multi-berth rooms. In addition, wood lockers were chosen over cheaper metal models, to reduce rattling. To access the accommodation areas from the outside, workers must come through an outer door, a vestibule and an inner door, so that blasts of hot, moist air are avoided on these decks.

Power to Burn The main propulsion is provided by four Cat 3508 DITA-B Rating, 960 hp @ 1,800 rpm each, for a cumulative 3,840 total hp. The engines are driven through Twin Disc MG 540 reverse reduction marine gears (6.18:1 reduction). Dixie Legacy has one SMI Model 500 bowthruster, rated 500 hp @ 1.200 rpm. The four-engine installation provides superior power for propulsion and increased maneuvering and positioning, by virtue of generous distances between outboard propellers. The two engines used for main propulsion are keelbox cooled, while the two jacking engines are radiator cooled.

The vessel is well-outfitted on the bridge with the top level of marine electronics and safety equipment, including GMDSS, fire detection and smoke alarm throughout, and nearly a full complement of JRC equipment, including .IRC radar, GPS and VHF. It also features a Furuno FCV 667 depth finder with three transducers, located port and starboard legs forward, as well as center below the engine room. This allows the captain, while running on the river, to switch from one transducer to the other and ensure that the vessel does not run up onto the bank. Domke said the owner is currently evaluating satellite communication service providers and will soon hook up the Dixie Legacy, helping to integrate it with the other eight vessels in the fleet and the home office 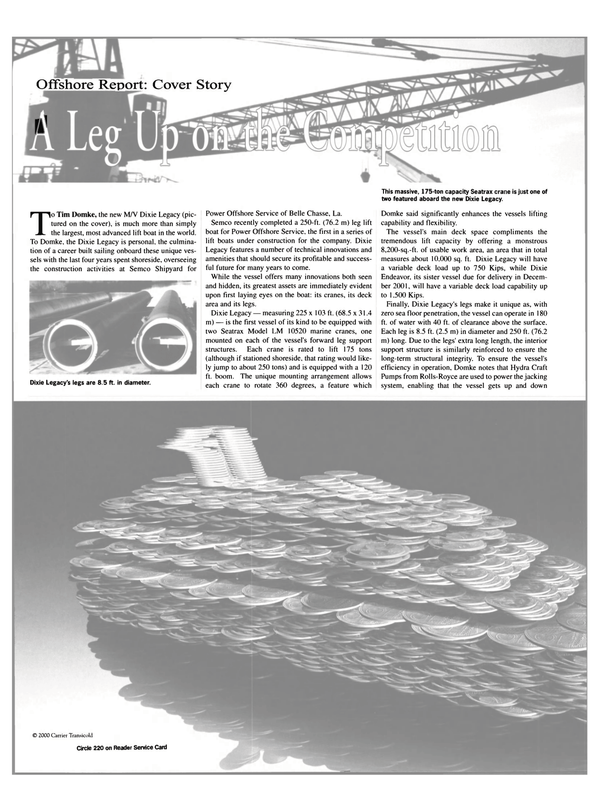 Read A Leg Up on the Competition in Pdf, Flash or Html5 edition of April 2001 Maritime Reporter

Other stories from April 2001 issue