Constructed by Astilleros Zamakona S.A. of Vizcaya/Bilbao, Spain, beginning in early 1999, the tug was built in accordance with DNV Regulations as an Escort Tug, with Fire-Fighter I and Oil Recovery certification, and also in full compliance with the National Regulations of the Norwegian Maritime Directorate.

Created by Robert Allan Ltd., the design of this powerful new tug incorporates a number of unique hull form developments which are the result of an extensive series of model tests and research by the firm over the past several years into the performance of escort tugs. Model tests were conducted at the Institute of Marine Dynamics in St.

John's, Newfoundland and at Voith Schiffstechnik's laboratories in Heidenheim, Germany to verify the predicted performance, and to refine the design of the hull and appendages. The model test program which included evaluations of speed and seakeeping in both directions, and measurement of steering and braking forces in both calm water and seastates, has been the subject of a number of recently published technical papers.

The enhancements incorporated into this design contribute to significant improvements in the escort towing performance and to the safety of the tug during high-speed escort towing operations.

The minimum performance requirements for the new tug at the outset of the design program were for a bollard pull of 90 tons, a free-running speed of 15 knots, and an escort steering force of 150 tons at 10 knots. The latter requirement was to be in compliance with the stability and heel limitations of DNV's Escort Tug notation. The tug has exceeded all expectations on trials with a bollard pull of 95 tons, and a free-running speed in excess of 15 knots. Escort towing performance has yet to be demonstrated full scale, however the final stability characteristics of the tug will support a sustained steering force of 160 tons at 10 knots in compliance with DNV Escort Tug Regulations and reinforcing the model test results.

The tug is configured to operate in the skeg first direction for all escort operations, but the hull form has been refined for best possible sea-keeping capabili- ties in both directions.

Ajax's propulsion is provided via a pair of Caterpillar 3612 diesel engines, each delivering 3,800 kW at 900 rpm to a Voith cycloidal propeller, model 36GII-270 through a Voith Turbo coupling.

Each main engine also drives a fire-fighting pump and a hydraulic pump via a PTO and step-up gear at the forward end.

Electrical power is provided by a pair of Caterpillar 3306B diesel gensets, each rated 165 kW at 1,500 rpm.

A large Effer model 80-000-3SL knuckle- boom crane serves to launch and recover this equipment as well as handle deck equipment and stores. Aft of these critical service areas there is a wet lobby which accesses the crew accommodation spaces.

The wheelhouse is fully appointed with the latest in electronic control and navigation systems for operation of a tug with a fully automated machinery space, and includes two separate Voith steering and control consoles, one forward and one aft for maximum operational visibility and control when operating in either direction.

Ajax represents the latest in escort towing technology; a high-performance vessel purpose-designed for maximum reliability, steering and towing performance, and safety in the execution of high-speed escort towing.

The tug assumed its duties at the Norsk Hydro Oil terminal on the west coast of Norway in early November, 2000. 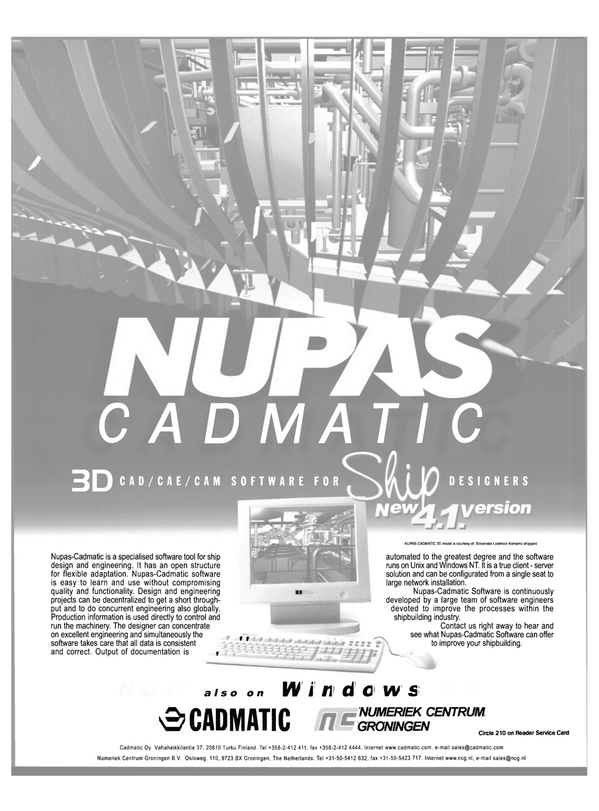