Sealift Program Receiving $1.3 Billion Editor's Note: The U.S., like its European Community and Japanese counterparts, is dependent upon the Persian Gulf for a large percentage of its oil needs.

Navy, a strategic analyst at the Center for Naval Warfare Studies at the Naval War College, Newport, R.I., points out that much of the industrialized West will continue to depend upon Persian Gulf oil reserves to sustain their energy needs. He states that "free and unfettered access" to the region's resources is vital to the West.

"The United States cannot have a complete energy policy without the types of military forces that guarantee regional stability in the Persian Gulf," stated Commander Nelson.

"We should sustain some form of multinational naval presence in the Persian Gulf. The current force could be replaced with a multinational squadron much like NATO's Standing Naval Force Atlantic. This 'beefed up' Middle East Force, operating in conjunction with Gulf Cooperation Council navies, would be the most effective way to ensure allied participation while eliminating the problem of a unilateral U.S.

presence." In a recent speech in Virginia Beach, Va., the Honorable H. Lawrence Garrett III, Secretary of the Navy, further emphasized the need for the U.S. to maintain a forward- deployable, combat-ready striking force.

The following is an excerpt from that speech.

My overriding concern is to ensure that the Navy and the Marine Corps maintain their ability to defend America's interests in a world that is changing rapidly.

The Cold War—which some say should have been called the Cold Peace—is possibly, all but over. The fall of the iron curtain freed millions from political oppression, but those who expected a bright new world of peaceful commerce and congenial values to immediately follow failed to reckon on Saddam Hussein's bid to write his own violent chapter in history.

To its credit, the world community has shown an unprecedented determination— in the current crisis— to defend the self-evident principle that every nation must live free from the threat of armed aggression by another. Defending that principle, however, depends on the credible will and ability to use military force against an aggressor if and when all other options fail. In this new geopolitical environment, the remote and abstract shadow of a World War III has been replaced by violent, sophisticated, and very real threats to our vital interests around the globe.

To meet such threats, our military will have to concentrate its strategic energy on projecting force—or the threat of force—wherever and whenever needed.

Operation Desert Shield is clearly illustrating the important and complementary force-projection capabilities of all of the services. But—I submit—the Navy/Marine Corps team offers a unique and proven ability to put a comprehensive, selfcontained, forward-deployed combat package almost anywhere on the globe within days—even hours.

A carrier battle group in combination with a Marine Expeditionary Unit, for example, is able—with little or no outside support—to establish local air superiority, to deliver ordnance far inland by aircraft and naval gunfire, and put troops ashore covertly or in mass. It possesses, furthermore, the deterring ability to threaten such action—subtly, if desired, or more visibly if necessary— without an enormous, intrusive, and diffkult-to-reverse commitment of men and material on the ground.

American naval forces have been called on over 200 times since World War II to employ such capabilities in crises around the world; and Desert Shield has made it clear that their role as an integrated, forwarddeployed, combat-ready striking force is going to become even more important over the next few years.

Our strategy, our training, and our hardware must reflect that fact.

Our planning must also reflect the fact that we are facing a time of dramatically declining resources. By 1995 America's defense budget is likely to be the smallest—as a percentage of GNP—that it has ever been since 1939.

The enormous investment the American people made over the last decade in their military forces is now paying off in our ability to deploy against Iraqi aggression in the Middle East. But—we must ask ourselves—what if our young people in uniform are called again a decade from now? Will we be prepared as we were in 1990-1991? Will we have the right weapons, incorporating the right technology, and in the right quantities?

Possibly—but only if all of us, in government and in industry, make the kind of smart, hardnosed business decisions now that will preserve as much capability that we as a nation can afford... decisions that will protect, to the degree we are able, a healthy, creative, and productive defense industrial base into the 21st century.

Our priority on the government side must be to achieve the greatest possible value for every budget dollar we spend, both on our own internal organization and on the products we buy. Money ill-spent represents a squandered resource. It con- constructive growth of the industrial market.

At the same time, our industrial suppliers must react quickly and decisively to the realities of a declining defense budget—they will have to respond by streamlining their processes and maximizing their productivity.

Together we have to embrace the obvious truth that a commander's success—at sea or on the battlefield— and a company's success in the marketplace at some point serve the same end. It only makes sense that government and industry build a trusting, innovative and farsighted relationship that will provide for a cost-effective defense of the nation's interests.

But my most important priority is people. Last year, when Soviet naval leaders visited our ships here in Norfolk, they said over and over: "If only I had sailors such as these." It is a fact—and I state it simply— that the men and women of our Navy and Marine Corps are the finest, best trained, most highly motivated individuals of any maritime force anywhere. They are the Navy and Marine Corps. They are the sailors that saved the Stark and the Roberts. They are the pilots that successfully confronted Khaddafi's jets. They are the Marines that fought door to door in Panama.

They are our sons and daughters who serve every day and night, in good times and in bad, in every corner of the world. They willingly put their lives on the line, not just when a Saddam rears his ugly head, but year in and year out, even when the society they serve has forgotten that they are there.

America possesses in these young people an asset beyond valuation— and the nation's continued ability to prevail over thugs like Saddam Hussein will depend on this nation's commitment—through its elected representatives—to the morale, education, leadership, and quality of life of our servicemen and women.

I will not take the costs of a declining budget out of the hides of our men and women. We've done that before, and we ended up with a demoralized, hollow Navy with undermanned and barely-functional ships. That will not happen again...

not on my watch. Our people deserve better, and our nation deserves better.

In concrete terms, this policy mandates that a reduction in the number of our personnel be accompanied by a reduction in our force structure—that is, the numbers of our ships and airplanes. I think it is important for everyone to know and understand—where naval forces are concerned—that we must maintain the proper and effective balance between manpower and force structure.

Sealift is essential both to executing this country's forward- deployment, combat-ready defense strategy. Toward this end, Congress has provided strong support for a sealift program and over the last two years has made over $1.3 billion available for the acquisition of sealift vessels. Sources within the Department of Defense have indicated plans for additional funding for a five-year program. 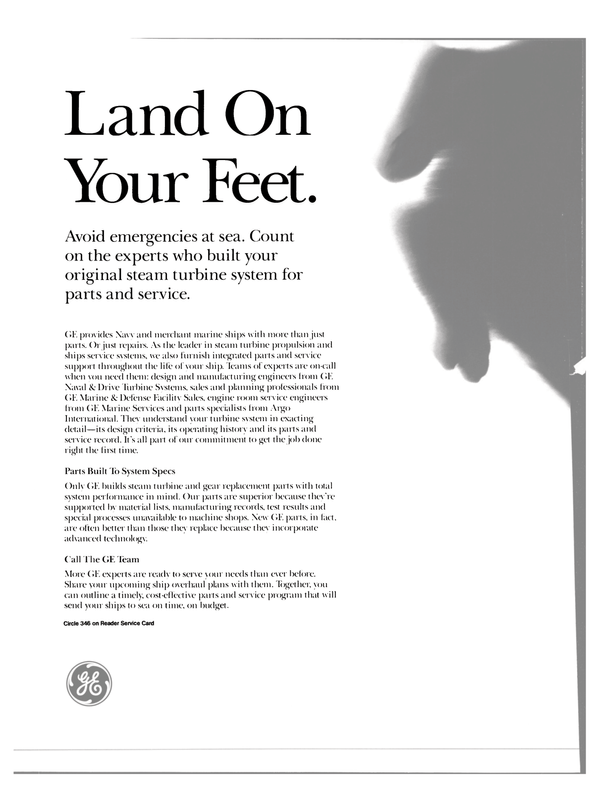 Other stories from February 1991 issue