Editor's note: This article pertains to commercial shipbuilding. Details of the U.S.

Navy shipbuilding program, which includes the construction of 90 vessels and three major conversions over the next five years, are highlighted in Mr. McCaul's article, "Status Report on Navy Shipbuilding and Repair," in the Naval Technology & Shipbuilding supplement in this issue.

The past 15 years have been difficult times for many shipbuilders and marine equipment manufacturers.

Massive overbuilding of internationally trading ships in the early 1970s and dramatic structural changes in the flow of international trade combined to make a very depressed situation. Many marine firms throughout the world have been unable to weather this economic storm. This difficult period, however, is coming to an abrupt end. A business turnaround is occurring in major shipping sectors and aging ships present a massive fleet replacement requirement. In fact, as will be discussed below, the take-off in worldwide ship construction has already begun.

World trade in oil has been growing since the mid-1980s. OPEC production during the first eight months of 1989 was 14 percent higher than the corresponding period last year—and more than 50 percent higher than production in the mid- 1980s. The world oil trade has grown from about 24 million barrels per day (MBD) in 1985 to more than 30 MBD in 1989.

As a result, tanker charter rates have climbed and resale prices of secondhand tankers have soared.

For example, a 350,000-dwt VLCC built in the mid-1970s would bring a price of $42 million today. Just one year ago, its resale price would have been $24 million. Five years back the ship was worth $6 million. Speculators have made vast killings in this market—including the Loews Group who is understood to be discussing sale of 50 percent interest in six 12- to 15-year-old ULCCs now valued at $300 million.

Rates in the bulk carrier markets have also improved over the past several years. One year time charters are fetching rates which double or triple those in the mid-1980s.

As a result there has been a rise in secondhand prices for bulk carriers.

Twelve months ago offers would be about $17 million—and five years ago a price of $7 million would be within reach.

Shipowners over the past several years gave been placing new ship orders at the rate of 20 million dwt annually. By late 1988, the world orderbook stood at 37 million dwt.

This is a far cry from the early 1970s—when new orders were running 120 million dwt annually and order backlog had swollen to 240 million dwt.

The increase in freight rates has not yet fully reflected itself in shipbuilding orders. Mostly the impact has been reducing inactive tonnage and raising secondhand prices.

This is about to end—and, in fact, probably has already ended.

Driving future shipbuilding demand is the increasing age of existing ships. By the mid-1990s, 42 percent of ships in the world tanker fleet will be 20 years or older.

Almost 60 percent of the OBO fleet and 37 percent of world bulk carriers will be 20 years or older. While some life extension is possible—and many owners are studying extension possibilities—a ship's economic and physical life starts to close quickly at 20 years of age. To meet this replacement timing, orders have to be placed now through the early to mid-1990s.

This replacement requirement— combined with improved shipping demand—will produce a massive future shipbuilding requirement. In fact, a number of major yards are already reported to be committed well into 1992. Quite likely there are speculators now placing ship orders for which they have no intention of taking delivery. Rather, they expect to gain by selling their building berth spaces to anxious buyers— much like speculators in the mid- 1980s who bought laid-up tankers for subsequent resale when market conditions improved.

Analyses of future ship construction by groups such as the Association of West German Shipbuilders and Japan's Ministry of Transport result in similar bullish outlook.

The Association of West German Shipbuilders projects ship orders totaling 155 million dwt over the 1991-95 time period. Japan's Ministry of Transport projects new orders totaling 164 million dwt during the same timespan. Placed in perspective, this would be an average order rate which is about double the current world shipbuilding output.

Prices for ships and ship components will climb to more profitable levels as demand begins to approach industry capacity.

All shipbuilding and marine equipment manufacturers should be positioning themselves to ride the coming world shipbuilding boom.

IMA Associates provides assistance in developing market strategy and long-term business plans. The firm's clients include shipyards, equipment manufacturers and other marine suppliers. IMA has performed assignments for more than 100 clients in 18 countries. For more information, contact: Jim McCaul at (202) 333-8501. 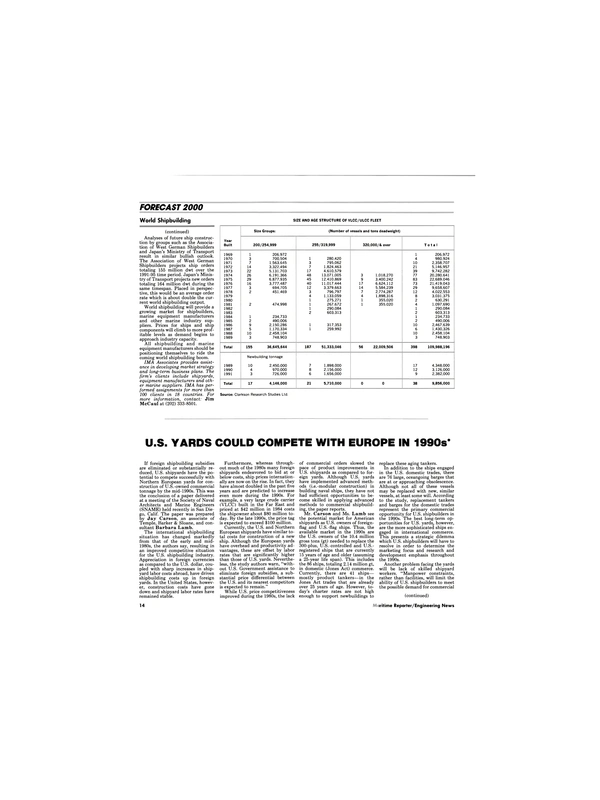 Other stories from December 1989 issue