Also demonstrated at the conference was the MODIS-Geadit, a joint development of MAN B&W and AEG, an engine diagnosis and trend system.

Prior to the engine demonstration, a conference was opened by Rudolf Rupprecht, Dipl.-Ing., Dipl. Wirt.-Ing., the board of management, MAN B&W Diesel GmbH.

Other company dignitaries speaking at the conference included: Folker Bohm, Dipl.-Ing., vice president of sales and marketing, who presented a paper on "Large-Bore Medium- Speed Engines in the Market of the 90s"; Hanns-Gunther Bozung, Dr.-Ing., vice president of engineering, who spoke on "Three Medium- Speed Engines—One Design Concept; Our Solution for the 90s"; Dipl.-Ing. Lochbichler, head of the engine design department; Dr.

Lausch, who spoke on the MODISGeadit engine diagnosis system; and Rudolf Erhardt, Dipl.-Ing., vice president of diesel engine service, who presented the paper "QE2 Propulsion Plant—Our Service Philosophy in Practice." Following the conference, the press was taken to test stand for a first-hand demonstration of a new model 6L48/60 diesel in a test bed.

During the testing of the engine at normal operating speeds, several observers, some as close as 12 feet, commented on the lack of any discernible vibration. The demonstration verified the remarkable engi- neering feat that MAN B&W has accomplished with its new mediumspeed family.

Beginning with the largest engine, the L58/64, MAN B&W has created an engine series for a class of toprated engines designed with a view of achieving economy and reliability and equipped with every manner of future-orientated, technical and economical design characteristics.

The "little brother," L40/54, which successfully completed its test bench trials at the end of 1987, with its cylinder output of 665 kw, is modeled on the basic design concept of the L58/64 engine, an engine that has since proved itself in operation in numerous ships' propulsion plants.

The L48/60 engine plugs the output gap between the 40/54 and the 58/64 with its 885-kw per cylinder at a speed of 450 rpm. This engine was also modeled on the same futureorientated design concept.

All three engines are supplied as in-line configuration engines with between six and nine cylinders.

MAN B&W exhaust gas turbocharger with a very high level of aggregate efficiency over the entire load range permits a part of the exhaust gas flow to be branched off and utilized in a turbo-compound system, thus raising the aggregate efficiency of the propulsion plant; resilient mounting of the engines— the rigid design makes it possible to arrange the resilient bearing elements directly on the engine lands.

Low maintenance requirement thanks to an optimized maintenance concept: with only three different hydraulic tools, all the main screw connections can be slackened and re-tightened; rocker arm covers can be opened without great physical exertion and fix themselves in the open position; and the design and arrangement of the rocker arms makes for swift and simple removal of the exhaust valves.

Jointly developed by MAN B&W Diesel and AEG, the MODIS-Geadit assumes the task of an engine expert in diagnosing the engine condition.

The system makes the expertise of the engine builders available to the engine operator.

Ignition and combustion behavior of the fuels and their influence on the engine operation are diagnosed using the software that has been utilized by MAN B&W in its engine development work.

The diagnoses are based on physical correlations, making MODISGeadit applicable for use in both two-stroke and four-stroke engine plants.

The MODIS-Geadit aids the engine operator in ensuring cost-effective operation of the ship by: (1) continuous diagnosis of the engine condition; (2) avoidance of operational disturbances—reduced downtimes and reduction of running costs; (3) targeted planning of maintenance work—TBOs lengthened and reduction of running costs; (4) support and decision aid for onboard personnel; (5) reduction in the risk of downtimes; and (6) electronic expert, knowledge permanently available and extendible. 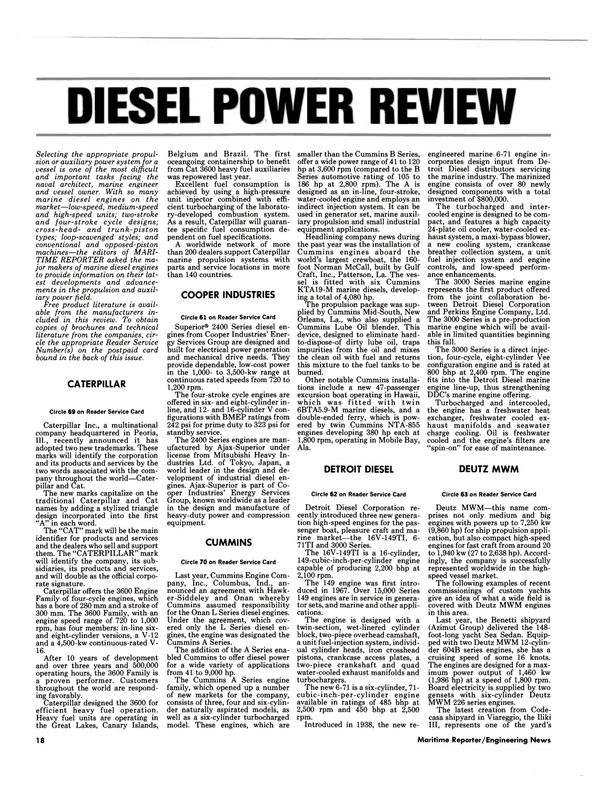 Other stories from July 1989 issue