The U.S. Enterprise, reportedly the first American vessel designed and built to catch pollock and process surimi, has been delivered by Halter Marine, Inc., New Orleans, to the Arctic Alaska fleet, Seattle, Wash.

The 224-foot, 36-crew member, floating factory will be able to catch up to 250 tons of pollock per day, and process 50 tons of surimi, a paste-like substance made from pollock used to make imitation crab meat, shrimp, and other seafood products. U.S. surimi consumption increased from 6 million pounds in 1981, to over 100 million pounds in 1986.

Approximately five tons of fish are required to make one ton of surimi. The fish is filleted and skinned before mincing and washing as opposed to the Japanese system which scales and splits the fish while leaving the skin on.

The "American" method according to Francis Milller, chairman of Arctic Alaska, greatly reduces the amount of potable water required to produce surimi. The Japanese method consumes from eight to 12 pounds of water per pound of surimi, while the American system uses about five pounds of water for one pound of surimi.

The U.S. Enterprise has more than double the water making capacity required as it is equipped with an Atlas (Danmark) 110,000 gallons per day, three-stage evaporation type water maker.

The boat, which was built at Halter's Moss Point, Miss., shipyard, was originally intended for use in offshore oil and gas fields. However, when the vessel was still under construction, Mr. Miller saw her potential as a catcher/processor and he and the Halter design team redesigned it for its new use.

The U.S. Enterprise was fitted with a Westfalia model OSA 7 centrifugal purifier from Centrico. The unit, which is used to clean up the vessel's diesel fuel, was supplied to Halter Marine by Marine Engineering of New Orleans in a "Centri- Pack." The package consists of a skid or platform including the VESA automatic timing unit as well as other elements.

After processing and packaging, the surimi is placed between refrigerated plates and quick frozen. The boat's 48,000 cu. ft. refrigerated holds can store up to 1.5 million pounds of surimi.

Her large pilothouse includes two control stations with one overlooking the aft, business end of the vessel.

Some of the navigation and communications equipment on board includes two Furuno radars, two VHF and two SSB radios, and a Sperry gyrocompass and autopilot.

For free literature on the shipbuilding and ship-repairing facilities of Halter Marine and other Trinity Industries shipyards, Circle 65 on Reader Service Card 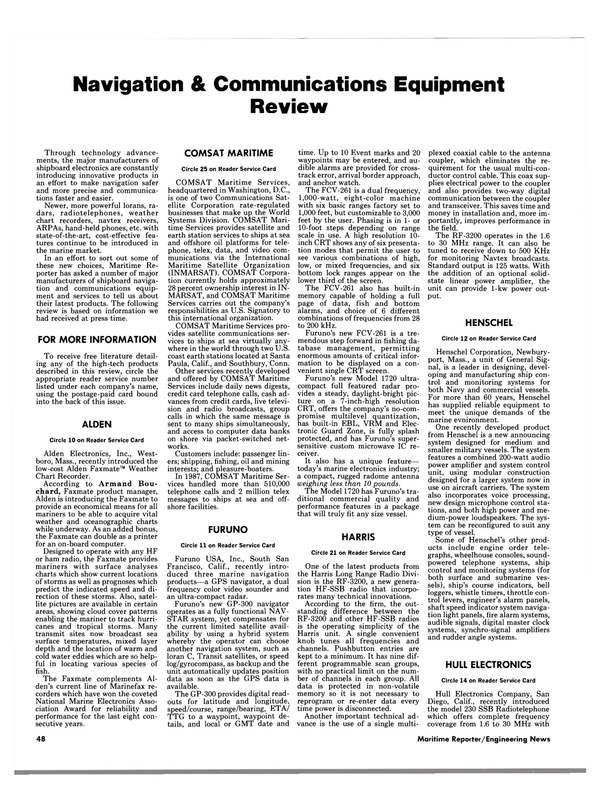