R&D Funding Growth Growth in Navy R&D spending during the 1980s has been impressive.

In 1980, the Navy spent $4.6 billion for R&D. Eight years later the figure had more than doubled— $9.5 billion in 1988. This growth has opened new areas of research and has brought many new companies into the program.

Exhibit 1 traces the growth in overall spending for Navy R&D in the 1980s.

Range of R&D Activities Equally impressive is the extent of activities. They range from the highly esoteric to the very practical— development of sensors for anti-air and antisubmarine warfare, C3 systems for command and control, ship and naval aircraft development, missile and torpedo engineering, electronic warfare concepts, etc.

Program Structure There are more than 270 program elements—many of which have mul- tiple subprojects. Each program element is individually funded and sponsored. They are grouped according to stage of development: • 6.1 and 6.2 programs involve research and exploratory development • 6.3 programs deal with advanced development • 6.4 programs focus on systems and component engineering Projects usually enter the system at the 6.1 or 6.2 level, transition to 6.3 when found feasible and move to 6.4 engineering as the final R&D stage.

Current Programs Exhibit 4 provides an idea of the scope of current activities. This listing is taken from IMA's report on Navy R&D. Details are provided in the report for each of these activities.

Business Strategy Successful Navy contractors have often been involved in early stages of system R&D. For example, RCA traces its highly successful role as Aegis manufacturer and system integrator to involvement in R&D efforts in the 1960s. Procurement contracts received by RCA for Aegis systems now exceed $3 billion. Boeing's involvement in the Sea Lance stand-off weapon can be traced back many years to its role in early exploratory research. Martin Marietta's development role in vertical launch system design led to its current position as one of two VLS suppliers.

GE's early and sustained in- volvement in sonar sensor R&D has positioned the firm as dominant sonar system supplier.

What distinguishes these firms is their use of Navy funded R&D to (1) establish initial position, (2) widen and deepen technical involvement, (3) evolve into a key developer role and (4) transition into full production as sole source or lead manufacturer.

Opportunities exist for both large and small firms to employ similar strategy for future business development— using Navy R&D as the vehicle. This strategy entails (1) developing an understanding of future R&D programs, (2) matching the firm's capabilities with these programs, (3) measuring the competition, (4) shortlisting programs and areas of interest and (5) formulating and implementing a plan of action for initial entry and growth. IMA's report is designed to assist in the gfiyr-st and third phases of this strate- IMA has just published an assessment of this business sector. The report details activities in each of 204 specific R&D programs. Past and projected spending is shown, planned activities described, names of Navy managers and current key contractors listed. A 35-page statistical section lists major R&D contracts awarded over the past four years—alphabetically by contractor, giving contract amount, brief description, contracting office. Another section provides names and phone numbers for key contacts in each of the principal R&D points of buying power. 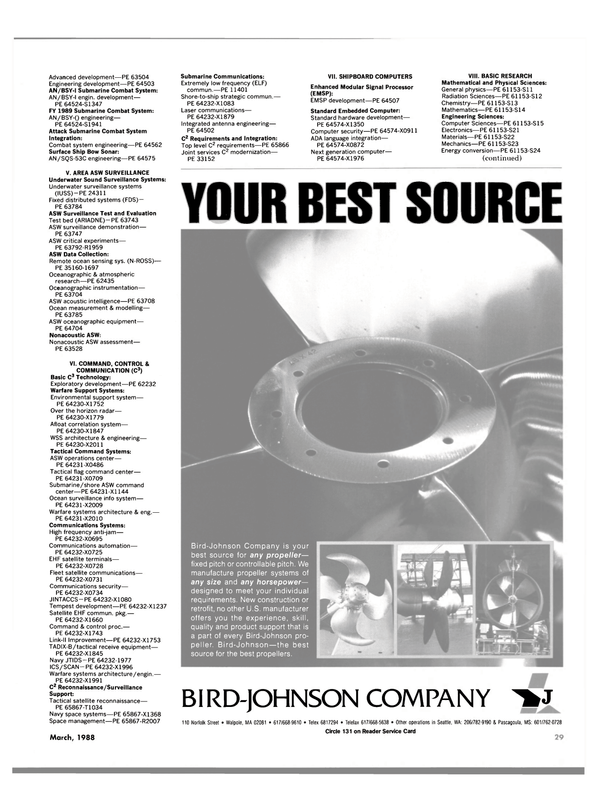 Read NAVY WILL SPEND OVER $9 BILLION IN FY 1988 ON R&D in Pdf, Flash or Html5 edition of March 1988 Maritime Reporter