Why You Should Be A Member Of AWO

The American Waterways Operators (AWO) is the only association representing the national interests of the domestic inland and coastal tug and barge industry. Reflecting its national character, AWO's 300- plus member companies are located along the banks of all major U.S.

waterways, and on the shores of the Atlantic, Pacific and Gulf Coasts.

The AWO represents an industry that operates a massive fleet of over 7,500 coastal tugboats and inland river towboats, and over 32,000 barges. The association's network of influence spans the United States from Florida to Alaska, and from Minnesota to Louisiana.

Since AWO's founding in 1944, it has worked to define, support and promote its members' interests and operations. This association of the nation's tug and barge industry leaders also directs its efforts toward achieving a greater public awareness of the marine transportation industry's contribution to the American economy. AWO considers as its primary task to function as an informed and persuasive voice to the federal government, in the media, and when necessary, before the courts, speaking for the collective interests of its membership.

The membership of AWO includes all segments of the inland and coastal barge and towing industry, including tugboat, towboat, and barge operators, and the shipyards that build and repair the industry's vessels. The association's ever-growing affiliate membership is comprised of suppliers, manufacturers, insurers, bankers, and other associations and businesses concerned with the marine industry.

The association's members meet regularly, at least three times a year at national conventions, and also on a regional basis. Clearly, AWO is not just another "chowder and marching society," but instead is comprised of industry leaders who meet to discuss, deliberate, and act in an effective and productive way that will enhance the industry's business position. AWO is a tough, no-nonsense organization of allied businesses, joined together with the purpose of collectively promoting, protecting and defending their industry.

As the leader of this industry, AWO assumes the responsibility not only for monitoring and interpreting actions which may affect the association's members, but also of anticipating important developments and responding to them in a timely and effective manner. AWO provides its members with up-todate reports on issues of concern, and speaks out, during the key developmental stages, on legislative and administrative proposals affecting the industry. The association's main objective is to demonstrate to national policy makers and the general public that barge commerce is a safe, fuel-efficient and cost effective method of transportation that plays a vital role in the nations integrated transportation system.

Those interested in learning more about membership in AWO, the nation's tug and barge industry association, should contact: Jeffrey A. 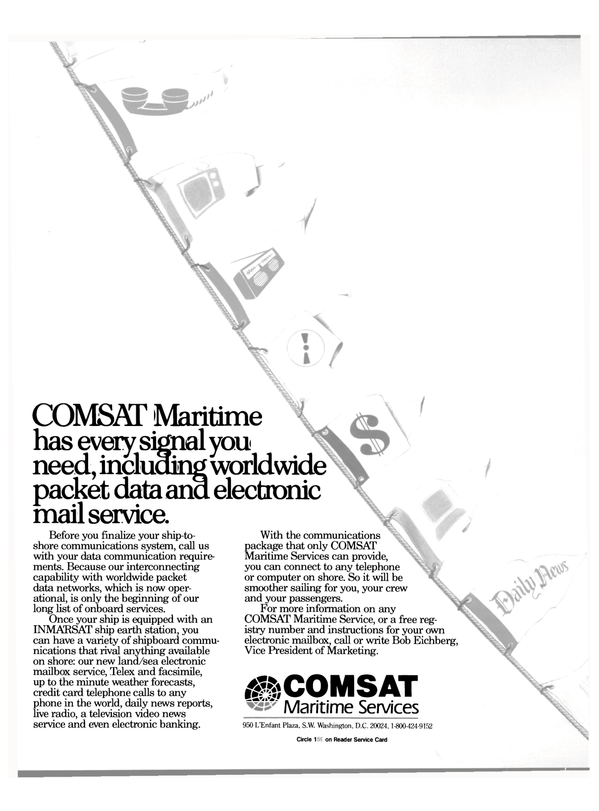 Read Why You Should Be A Member Of AWO in Pdf, Flash or Html5 edition of March 1988 Maritime Reporter