Ashland invested about $3.5 million for each boat to modernize its fleet. Ashland already operates the largest fleet of tank barges on the inland waterways.

The SuperAmerica has an overall length of 150 feet and breadth of 45 feet and has accommodations for 17.

Her normal crew complement is 10.

The 4,200-hp inland towboat is powered by a pair of Caterpillar 3606 diesel engines. The Cat 3606 is one of a series of new large displacement engines that are offered in six, eight, or 12-cylinder versions. Designed to operate on number two or heavier grade fuel oil, the 3606s are making their new boat debut in the SuperAmerica and her sister vessels, the Valvoline and Paul B. Blazer.

Intake air for the two main engines is filtered by high-efficiency Amer-Kleen filters.

Two 155-kw generators, each powered by a Caterpillar 3306TA, insure ample electronical power for the boat.

The rest of the drive package consists of Falk 24MR40 reduction gears with a ratio 4.48:1 turning 105- inch Columbian Bronze five-bladed propellers. For added low-speed power, the propellers are fitted with Kort nozzles.

Some of the navigation and communications equipment featured are the SuperAmerica includes two Standard Horizon VHF radios, a Motorola SSB radio, two Sperry Marine radars, and an Elac depth sounder.

The SuperAmerica along with her sister ships, the Valvoline and the Paul G. Blazer, should help Ashland Oil meet their customer demands in a very competitive market. 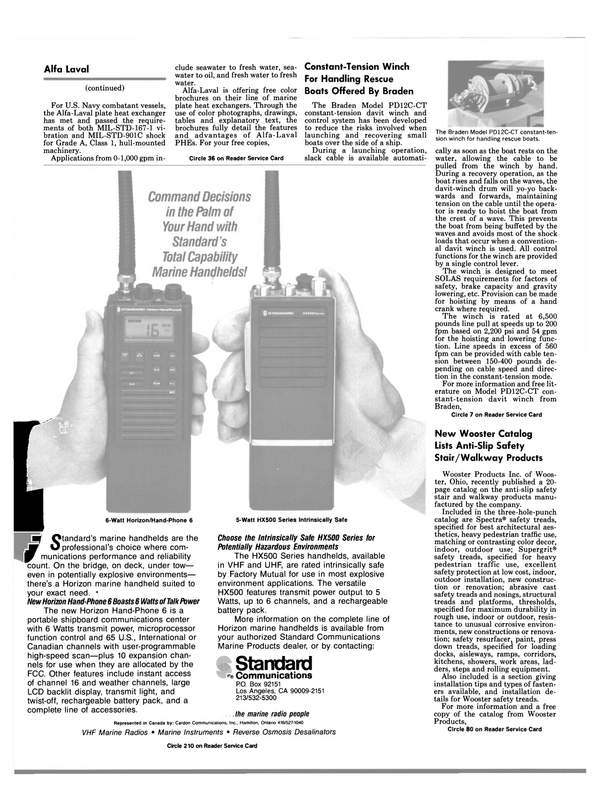