The U.S. Army has entered into a new era in marine transportation with the delivery of the General Frank S. Besson (LSV-1), the first of four 273-foot Logistic Support Vessels being built by Moss Point Marine, Inc., Escatawpa, Miss., under a $40.7-million contract.

The ship is the first of a new class of landing craft with roll-on/roll-off (RO/RO) capabilities which permit their use where there are no ports.

The RO/RO capability is made possible by bow and stern ramps which enable off-loading of cargo to undeveloped beaches and unloading from other vessels or wharves.

Speaking at the vessel's christening, Maj. Gen Fred E. Elam, the Army's chief of transportation, said the new ships will give the Army state-of-the-art capabilities by replacing boats built 30 to 40 years ago and they will allow the Army to " . . . select where we are going to come in rather than letting the enemy dictate it or the facility dictate it." The General Besson (and sister ships to follow) is equipped with an on-board computer linking it with logistic data files at U.S. Army and Navy stock points.

It can transport between 900 and 2,000 short tons of cargo depending on the type of operation.

The LSV is capable of approximately 12 knots sustained speed and has a range of over 5,500 nautical miles at loaded displacement. It has a crew of six officers and 24 enlisted personnel.

The Army contract was awarded by the Navy's Military Sealift Command and is being administered by the Navy's Supervisor of Shipbuilding, Conversion, and Repair (SUPSHIPS) in Pascagoula, Miss.

John Dane I I I , president of the Trinity Marine Group which includes Moss Point Marine, Inc., said the three sister ships will be delivered at approximate 60-day intervals.

For free literature on the shipbuilding and ship-repairing facilities and capabilities of Trinity, Circle 3 1 on Reader Service Card 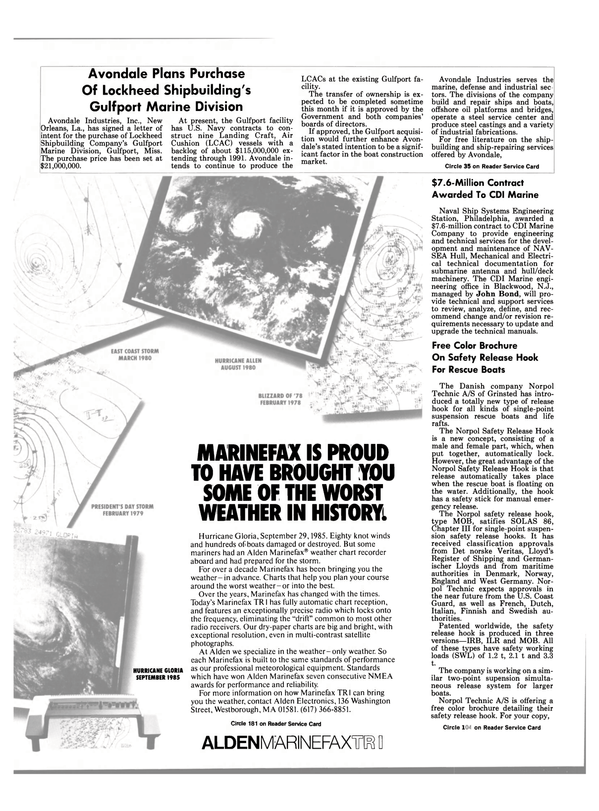