The American Waterways Operators (AWO) recently announced the election of Harriet Harrison as chairman of the association's Southern Region.

Mrs. Harrison is the first woman to ever be elected chairman of any of AWO's five regions. The fact that the southern region which consists of waterways in Louisiana, Texas, Mississippi, Oklahoma, Georgia, Alabama, Arkansas, Tennessee and Florida has the largest membership of any region, gives the chairmanship that much more responsibility to supply the leadership for maritime concerns.

Mrs. Harrison follows in the footsteps of her father, Harry Collins, who was himself elected to the same AWO chairmanship in 1967.

Mr. Collins is one of the only 25 people ever to be elected "Directors Emeritus" (member for life) in the history of AWO.

Previously Mrs. Harrison had been membership committee chairman of AWO and was instrumental in leading a highly successful membership drive. She was also the first woman to be elected a director in the southern region.

"Being elected chairman by my peers is a great honor," said Mrs.

Harrison. Her first goal is to immediately create and establish legislative office committees with individual chairmen for each of the states in the southern region. This will help to monitor the activities of state legislations that affect the marine industry. "As an industry, we must become pro-active instead of reactive," said Mrs. Harrison.

Although she has already begun her duties, Mrs. Harrison will officially be acknowledged in April at the 1988 national AWO convention to be held in Washington, D.C. 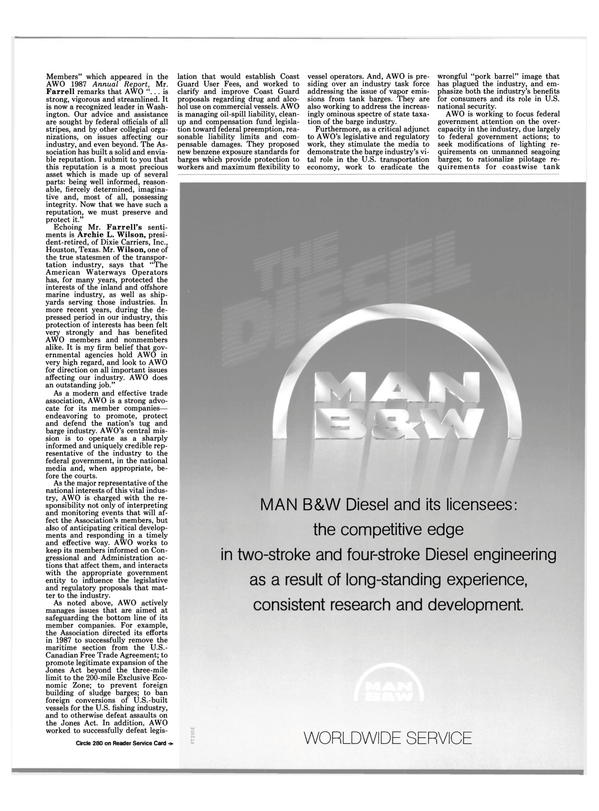