The second in a series of five Landing Ship Dock (LSD) vessels being built for the U.S. Navy was christened the USS Comstock (LSD-45) at recent ceremonies at the Shipyards Division of Avondale Industries, Inc., New Orleans, La.

Named for a historic mining site in Nevada, the Comstock is 609 feet 7 inches long, with a beam of 84 feet, full load draft of 19 feet 7 inches and full displacement of 15,745 tons.

Powered by four medium-speed Colt-Pielstick diesel engines for a total ship's horsepower of 33,000 shp, the Comstock is capable of service speeds in excess of 20 knots.

She is equipped with 60-ton and 20- ton cranes, manufactured by Lake Shore, and will be manned by 22 officers and 390 enlisted men.

The Comstock, like her sister LSDs, is a multifunctional ship capable of a wide range of amphibious assault operations for the Navy and Marine Corps. Her primary mission is to carry, launch and dock up to four Landing Craft Air Cushion (LCAC) vessels. The LCACs and other equipment are carried in the Comstock's 440-foot-long inside well.

The maid of honor at the christening was Miss Janice Peters and the flower girl was Cherie Ann Abadie, the daughter of two Avondale employees.

The Comstock and other LSD ships are constructed by means of modular fabrication. The Comstock is expected to be delivered in February 1989. 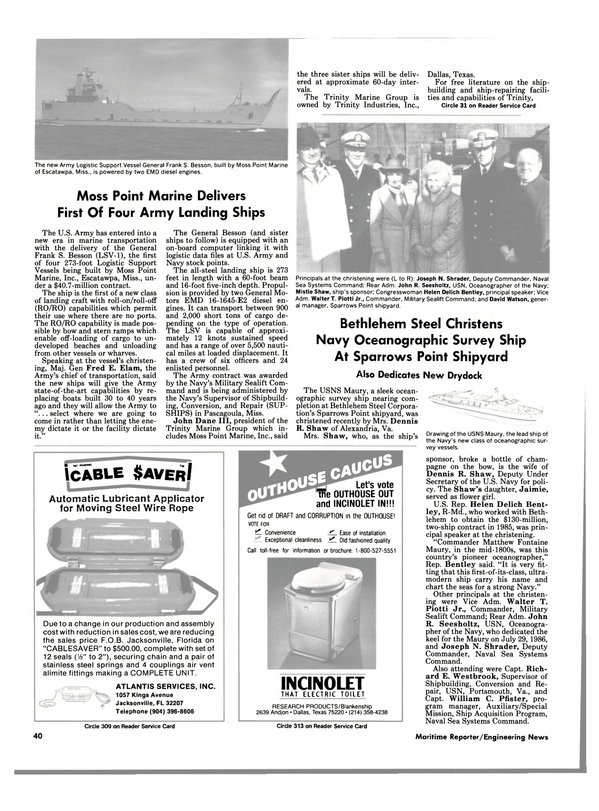