This is an excerpt from the second quarterly update to the IMA report on U.S. Navy Ship Procurement.

Information is current as of 8 November, except if noted.

PROGRAM DEVELOPMENTS The number of Navy ships under contract continues to decline. Reports indicating significant future shipbuilding program cutbacks have appeared in the press. A twin-hull T-AGOS has been scheduled for late 1986 procurement. And Navy has dropped its plans to continue developing -JTIDS, a sophisticated tactical warfare communications system.

Wiliiam Taft, the Deputy Secretary of Defense, is reportedjis^saying 20 warships are to be cut from Navy's five-year plan. He is quoted as saying the cutback in escort ships has "called into question our ability to ever flesh out 15 carrier battle groups." Two recent congressional staff documents have questioned the affordability of future navy shipbuilding.

A staff working paper by the Congressional Budget Office concludes that maintaining the future 600-ship Navy will require funding levels 20-60 percent higher than the present level (in real terms). A 30 August report by the Congressional Research Service points out that Navy has already downrated its cruiser/destroyer force objective from 137 ships to 115 ships. The CRS report goes on to ask "is the projected cruiser/destroyer shortfall a harbinger of future clashes between stated Navy requirements and available resources?" Navy Developing T-AGOS SWATH Procurement Package Navy plans to contract for a 3,000-ton small-waterplane-area twin-hull (SWATH) design TAGOS in late 1986. Ten shipbuilders are now participating in a Navyindustry design program for SWATH. Each of the ten yards has donated one technical person for a six-month period to help in the design. Only the yards participating in the cooperative design will be invited to bid on the construction contract.

It is uncertain whether the ship construction contract will be funded from FY 1986 or FY 1987 SCN funds. Navy wants to use FY 1986 T-AGOS funds for the SWATH procurement. This would require approval of Congress—and at time of publication the Senate, but not the House, favors such approval.

FY 1987 funds would be used if the request to use FY 1986 funds is denied. Presumably the SWATH T-AGOS would be procured using funds originally programmed for the option ships in the Halter T-AGOS contract.

Navy JTIDS Dropped Navy has cancelled plans to develop its own version of a joint tactical information distribution system (JTIDS). Navy still plans to install JTIDS, a jam-resistant voice and data communications system, on board ships, aircraft and in groundbased command centers. But the system will be that under development by the Air Force at Rockwell- Collins and Singer Kearfott.

DOD was directed to review the current Navy and Air Force JTIDS programs—and choose one for use by both services. The Air Force system apparently was considered the cost effective alternative.

Top Navy Contractors Navy awarded in FY 1985 about 1,500 large contracts (i.e., contracts exceeding $3 million). A listing of the top 100 contractors and their reported Navy contract value is provided in Exhibit 2. The 50 largest individual contracts during FY 1985 are listed in Exhibit 3.

Shipbuilding Contractors General Dynamics and Newport News head the list of shipbuilding contractors in FY 1985 as a result of continued submarine construction.

Lockheed, sole supplier of the Trident ballistic missile, was second on the list. Last year the firm received Trident missile contracts exceeding $1.2 billion. Raytheon was the third largest ship ordnance and electronics supplier. Major contracts were received for Aegis fire control systems, sonar systems and electronic countermeasure systems. RCA is fourth—based on contracts exceeding $480 million to supply the Aegis weapon system. In fifth place is McDonnell Douglas, who (along with GD-Convair) supplies the Tomahawk cruise missile. The list of ship ordnance and electronics contractors is provided in Exhibit 5.

Other than nuclear power plants, most machinery is supplied as contractor furnished material.

Vitro is third with contracts exceeding $40 million to provide support services to the Trident missile program. Sperry is fourth based on its contracts to provide engineering field services for patrol craft, frigates and logistics assistance. General Dynamics and Newport News are fifth and sixth due to their design work on the SSN-21. A list of engineering and design contractors is provided in Exhibit 7. 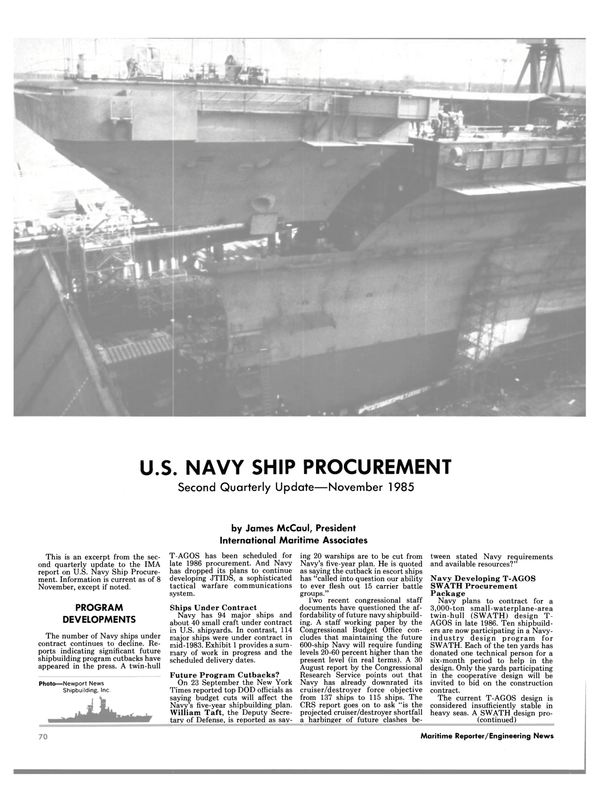