review of some of the oceangoing vessels that were converted during the past year for military and commercial applications.

ANTARES Avondale Shipyards The USNS Antares, redelivered this year by Avondale Shipyards, Inc., was the first of three Fast Sealift Ships being converted by the Louisiana yard for the U.S. Navy from Sea-Land's SL-7 containerships.

The ship's capabilities include 33- knot service speed, RO/RO handling of cargo at pierside and while anchored, and self-sustaining lifton/ lift-off for vehicles and helicopters.

She is able to land helicopters and load a mixture of tanks, helicopters, wheeled vehicles, and containerized or palletized cargo.

The conversion of the Antares included the modification of existing container storage areas to provide various new decks including a flight deck, the installation of Hagglunds 35-ton and 50-ton twin cranes, and the installation of two sideports and various platforms and ramps to support RO/RO loading and unloading. All of the cargo access equipment was supplied by MacGregor-Navire.

Avondale utilized state-of-the-art techniques for zone outfitting in the conversion effort. Structural modules were outfitted with pipe, ductwork, electrical wireways, and other equipment prior to being erected at the building site.

BENWALID Meyer Werft The Papenburg, West Germany shipyard of Meyer Werft has redelivered the Benwalid, converted into a combination sheep/cow carrier from the former containership Ville D'Orient. The converted vessel was turned over to the Turkish-Libyan Joint Maritime Transport Company of Istanbul, which has chartered the ship from the principals, Islamic Development Bank of Jeddah, Saudi Arabia. For the owner, this conversion is the first venture into the livestock carrying trade.

The Benwalid has an overall length of 378.3 feet and beam of 51 feet, and was converted for worldwide trade in compliance with the Australian Department of Trade regulations. She is capable of loading 21,300 sheep (at 110 pounds each) in 12 tiers, or 2,100 cows (at 992 pounds each) in six tiers below deck and on deck. Main propulsion is by a Crossley/Pielstick diesel engine.

The ship has been fitted with exchangeable aluminum deck pallets for sheep, for which Meyer Werft holds a patent. These pallets enable the ship to be re-equipped for the carriage of cows within one day. All steel decks are provided with a non-skid coating.

All the systems for the transport of livestock were developed by the shipyard, improved and optimized over many years of experience with this type of conversion. Major installations include the fodder supply system, fodder and drinking vessels of aluminum, dung removal systems, and the ventilation system.

All the cow and sheep ports of the pens are made of seawater- and ammonia-resistant aluminum; for all other equipment, galvanized material was used.

To provide for the extra crew members required for the transport of livestock, the living quarters were expanded to accommodate 40 instead of 24 personnel. Two new suitable sized lifeboats were installed aboard the ship.

DENEBOLA Pennsylvania Shipbuilding Another of the U.S. Navy's TAKR Class of fast supply ships, the USNS Denebola (T-AKR-289), was delivered recently by the Pennsylvania Shipbuilding Company yard in Chester, Pa. She is the sister ship of the USNS Capella that was delivered in 1984 ahead of schedule, and is the second of a two-ship, $100- million contract awarded to Penn Ship.

One of the Navy's largest and fastest auxiliary vessels, the Denebola has an overall length of about 946 feet, beam of 105 ¥2 feet, depth of 66 feet 7 V2 inches, and draft of 36 feet 8 inches. She is powered by a steam turbine plant of 120,000 shp that gives her a service speed of 33 knots. The ship will carry tanks, armored personnel carriers, helicopters, and other wheeled equipment for an armored division of the U.S.

Army. In one typical arrangement she will load 122 M-l tanks, 183 helicopters of various sizes, and other assorted wheeled vehicles.

While the Denebola's engine room and living quarters have not been altered significantly, her cargo holds have been completely reconstructed.

Where formerly she had four cargo holds fitted with vertical cells for container stowage, she now has five continuous decks connected by fixed ramps.

Two conventional holds aft of her superstructure can carry up to 46 twenty-foot containers, 53 thirtyfive- foot containers, and 53 thirtyfive- foot flat racks of supplies, spare parts, etc. She is also arranged for the carriage of eight Sea Sheds, an open-frame supercontainer 35 feet long, 25 feet wide, and 13 feet deep, designed for the transport of outsized and very heavy loads.

Helicopters can operate from two landing pads on her topmost deck, and can be stored in the space below it. Tanks and wheeled vehicles are loaded through special doors on each side of the ship. Each door is fitted with a 73- by 20-foot folding ramp that has a design load capacity of 65 tons. These doors give access to 185,000 square feet of stowage area distributed over the five decks.

Two Hagglunds heavy-duty, 35- ton cranes are installed amidships to handle loads over the side, and two more, each of 50 tons capacity, are fitted aft for the same purpose.

Each pair of cranes can be operated in tandem to provide 70-ton lifts.

NURNBERG EXPRESS Blohm + Voss Hapag Lloyd's containership Nurnberg Express arrived in New York recently on her first U.S. call since being jumboized by Blohm + Voss shipyard in Hamburg, West Germany. She is the first of four sister ships in the line's North Atlantic service that are to be lengthened.

All are powered by M.A.N, diesels.

The containership was given a new midbody that increased her overall length to 789 feet from the former 667.7 feet, thereby creating two new 40-foot holds. Blohm + Voss won the jumboizing contract against keen European and international competition. A major factor in the award was the Hamburg yard's ability to guarantee the short conversion period of one month for each ship stipulated by Hapag Lloyd.

After only four weeks in the shipyard, the Nurnberg Express moved to a container terminal in Hamburg to pick up cargo bound for the U.S.

East Coast. The three sister ships— Stuttgart Express, Koln Express, and Dusseldorf Express—will be jumboized in the same way. During the periods that the vessels are in the shipyard, replacement tonnage is being chartered to maintain Hapag Lloyd's sailing schedule.

Other work performed during the conversion included the rebuilding of the deck to increase the stack loads (slot maximum weight) from 40/60 tons to 60/90 tons per 20/40- foot container, equipping the vessel with a new lashing system for deck containers, and arranging a hold for the transportation of hazardous cargoes below deck. TEU capacity was increased from 1,758 to 2,594.

She is one of five Maersk Line vessels converted by Bethlehem—three at Sparrows Point and two at the Beaumont Yard—under a $600-million Navy contract.

The Fisher will be part of the Navy's Maritime Prepositioning Ship Program under the Military Sealift Command, and will be operated by Maersk Line Limited of New York. As such, the ship will be stationed at potential trouble spots around the world, carrying part of the equipment and supplies needed by a Marine Corps Amphibious Brigade.

To meet the requirements of the MPS conversion, the shipyard separated the vessel amidships and added a 157-foot-long midbody, extending her overall length to 755 feet. Her depth was changed with the addition of two deck levels, increasing the keel-to-deck depth from 54 to almost 70 feet. Doing this also required the alteration of three existing decks.

These modifications provided more cargo holds, space for a third set of twin Hagglunds 36-ton-capacity cranes, and a new 80-man deckhouse for "surge" crews needed during periodic loading and unloading.

The normal crew complement will be about 65, comprised of civilian and MSC Personnel.

The ship's Sulzer diesel engine propulsion plant, a 7RND76M with a maximum continuous rating of 15,960 bhp at 112 rpm, will provide a service speed of 17.5 knots operating at 85 percent of mcr.

USNS REGULUS National Steel The San Diego yard of National Steel and Shipbuilding Company recently redelivered the USNS Regulus (T-AKR-292), a Fast Supply Ship converted for the U.S. Navy's Military Sealift Command. She and her sister ships are among the largest and fastest cargo vessels in the world, with an overall length of 946 feet and speed of 33 knots. The TAKRs will be contract-operated by civilian mariners, and held in ready reserve status until needed for contingencies or used in Department of Defense exercises.

These supply ships are former Sea-Land SL-7 containerships that will provide rapid sealift capability for the transport of military equipment and supplies from the U.S. to any part of the world. They are being converted to give them: rollon/ roll-off capability via MacGregor- Navire access equipment; selfsustaining cargo-handling capability using new 35-ton and 50-ton twin cranes supplied by Hagglunds; an emergency helicopter landing area; and side ports to facilitate rapid loading and discharge.

The Military Sealift Command is responsible for providing the necessary sealift capability to rapidly supply military forces overseas and sustain them for as long as operational requirements dictate. The MSC also operates auxiliary ships that deliver supplies to Navy combatant ships while underway, oceanographic and survey vessels, and tankers and dry cargo vessels that deliver Defense Department cargoes worldwide. 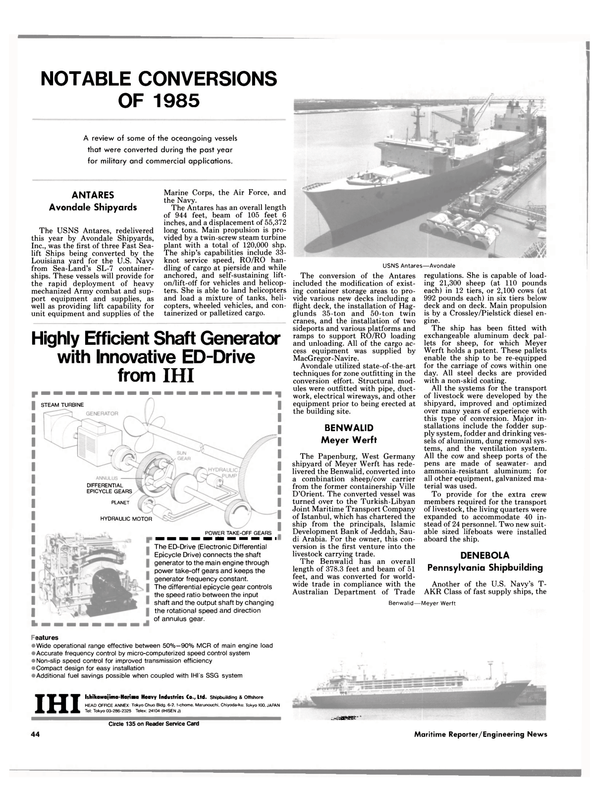