The first of 10 Torpedo Weapons Retrievers (TWR) under contract at Marinette Marine Corporation in Marinette, Wise., departed the shipyard recently for delivery to the Naval Sea Systems Command in Charleston, S.C.

The TWR Class is an entirely new design developed by Marinette in cooperation with the Navy to meet stringent mission requirements.

The new vessels will replace the aging TWRs now in service. They are used by the Navy for recovering spent torpedoes, missiles, small drones, and mobile targets fired during weapons systems tests of all submarines and surface combatant ships. The new TWRs will be capable of staying on station for a week in support of these tests; the smaller existing boats have to return to base at night and return to the test site the next day.

The new TWR is 120 feet long with a beam of 25 feet, depth of 12 feet, and approximate displacement of 213 tons. The vessel is all-steel construction with 2,000 bhp of propulsion power, and twin shafts driving fixed-pitch propellers. It has a design speed of 16 knots, range of 1,700 nautical miles, and accommodates up to 18 persons.

Four more of the TWRs will be ready for departure from the Marinette Marine yard prior to the 1985 closing of the St. Lawrence Seaway. The remaining five will be delivered in the spring of 1986. 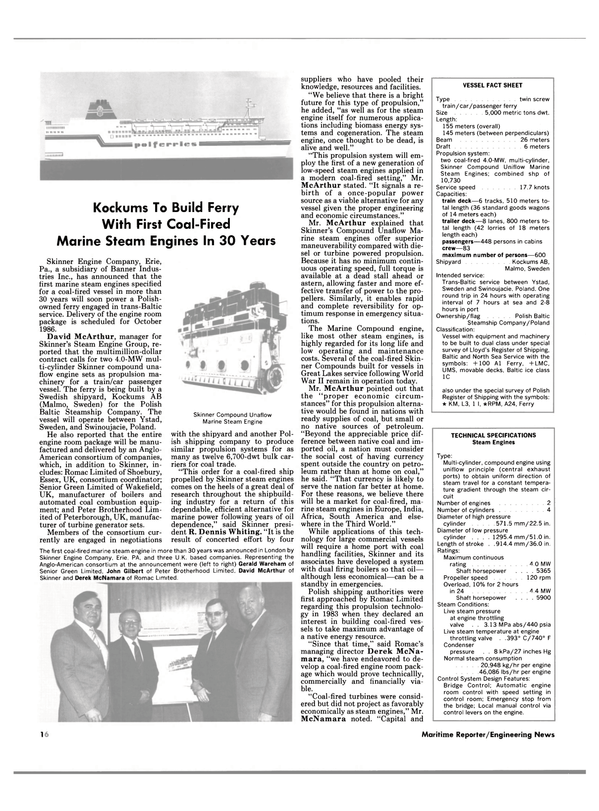