Skinner Engine Company, Erie, Pa., a subsidiary of Banner Industries Inc., has announced that the first marine steam engines specified for a coal-fired vessel in more than 30 years will soon power a Polish - owned ferry engaged in trans-Baltic service. Delivery of the engine room package is scheduled for October 1986.

Members of the consortium currently are engaged in negotiations with the shipyard and another Polish shipping company to produce similar propulsion systems for as many as twelve 6,700-dwt bulk carriers for coal trade.

"This order for a coal-fired ship propelled by Skinner steam engines comes on the heels of a great deal of research throughout the shipbuilding industry for a return of this dependable, efficient alternative for marine power following years of oil dependence," said Skinner president R. Dennis Whiting. "It is the result of concerted effort by four suppliers who have pooled their knowledge, resources and facilities.

"We believe that there is a bright future for this type of propulsion," he added, "as well as for the steam engine itself for numerous applications including biomass energy systems and cogeneration. The steam engine, once thought to be dead, is alive and well." "This propulsion system will employ the first of a new generation of low-speed steam engines applied in a modern coal-fired setting," Mr.

McArthur stated. "It signals a rebirth of a once-popular power source as a viable alternative for any vessel given the proper engineering and economic circumstances." Mr. McArthur explained that Skinner's Compound Unaflow Marine steam engines offer superior maneuverability compared with diesel or turbine powered propulsion.

Because it has no minimum continuous operating speed, full torque is available at a dead stall ahead or astern, allowing faster and more effective transfer of power to the propellers.

Similarly, it enables rapid and complete reversibility for optimum response in emergency situations.

The Marine Compound engine, like most other steam engines, is highly regarded for its long life and low operating and maintenance costs. Several of the coal-fired Skinner Compounds built for vessels in Great Lakes service following World War II remain in operation today.

Mr. McArthur pointed out that the "proper economic circumstances" for this propulsion alternative would be found in nations with ready supplies of coal, but small or no native sources of petroleum.

"Beyond the appreciable price difference between native coal and imported oil, a nation must consider the social cost of having currency spent outside the country on petroleum rather than at home on coal," he said. "That currency is likely to serve the nation far better at home.

For these reasons, we believe there will be a market for coal-fired, marine steam engines in Europe, India, Africa, South America and elsewhere in the Third World." While applications of this technology for large commercial vessels will require a home port with coal handling facilities, Skinner and its associates have developed a system with dual firing boilers so that oil— although less economical—can be a standby in emergencies.

Polish shipping authorities were first approached by Romac Limited regarding this propulsion technology in 1983 when they declared an interest in building coal-fired vessels to take maximum advantage of a native energy resource.

"Since that time," said Romac's managing director Derek McNamara, "we have endeavored to develop a coal-fired engine room package which would prove technicallly, commercially and financially viable.

"Coal-fired turbines were considered but did not project as favorably economically as steam engines," Mr.

McNamara noted. "Capital and maintenance costs for turbines would have been higher. Moreover, turbines would not offer equivalent maneuverability. In particular, there would be less horsepower on demand for reversing engines.

"Working closely with Skinner, Senior Green and Peter Brotherhood, we arrived at a design concept— featuring two engines, two boilers and two turbo alternators— that met the engineering and economic criteria of both the shipyard and the ferry operators." The major reason for selecting the Skinner Compound Marine Steam Engine is greatly reduced operating costs—chiefly due to availability of inexpensive coal—to be enjoyed during the expected 30-year life of the steam engines. 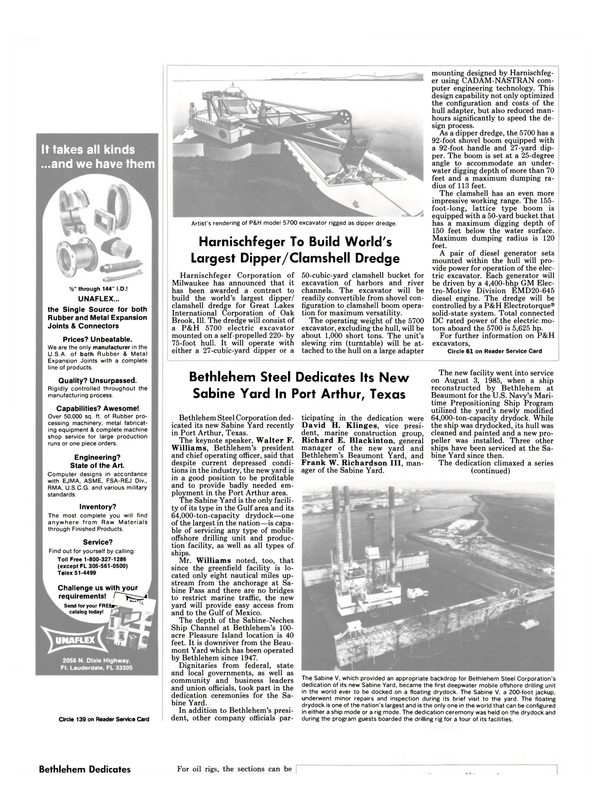