No one questions the fact that the survival of the maritime industry is linked to lower operating costs and improved performance. However, we cannot incorporate fully automated controls to effect "reduced manning" for its own sake without considering how this proposed system effectively addresses backed-up control, serviceability, operator interaction with his environment and interface capability to other control systems.

During the past century, ship controls evolved from manual to semiautomated pneumatic and discrete electronic systems and now they stand at the edge of the "microprocessor" age and total vessel automation.

Bailey Controls, in late 1984, introduced Network 90 to the maritime industry. Already a proven system in over 3,000 stationary applications, Network 90 brings the power of microprocessor-based distributed digital control to shipboard and offshore environments. This fully qual- ified marine system eliminates the need for vessel and platform personnel to see their environment as a series of unrelated processes.

Not only can Network 90 itself provide all the monitoring and control functions required, but it can also tie together formerly dissimilar systems into a single vessel communication network. This is possible because of Network 90's unique system design which does not rely on a central processor or data traffic manager.

The System. A typical marine system configuration consists of remotely located "process control units" and "interface units" connected by a vessel "data highway." The "process control units" provide the direct connection to the various field devices for either monitoring or control. Within each unit resides the required modules to perform the control, alarming and reporting procedures.

Each of these units has redundant internal and external communication capability as well as redundant and bumpless transfer of control through the Multifunction Controller. In addition, the selfdiagnostic capability of Network 90 insures that "bad" data is neither allowed into or out-of the system.

And should there be an anticipated problem, a final control signal is transmitted to place all affected processor in a "fail-safe" condition.

The "interface units" can take the form of conventional control consoles with individual hand stations, or it can use the color CRT-based Operator Interface Unit. The CRTbased unit provides, through high resolution graphics, a real-time window on the process. Through this device, automatic printouts of "alarm conditions," equipment performance and operational status may be obtained. A functional keyboard is employed, which allows the operator to use single keystrokes.

No programming or keying in of commands is required. These CRTbased units operate in redundancy throughout the vessel or platform.

System Features. Network 90 does not require the operator to physically see or hear the alarm.

Through its multiple level alarming capability with corresponding levels of automatic or operator permissive control, this system will provide for preventive actions rather than crisis intervention. This allows operators to take a calmer more efficient approach to dealing with emergencies thereby reducing the possibility of operator error through overreaction.

All controls, alarming and monitoring functions are resident in non-volatile memory, further reducing the possibility of loss of control through an accident such as disc wear, magnetic interference, etc.

Network 90 does not require any special tools or training to maintain.

In the event of a module problem, a repair is effected by simply sliding out the failed module (indicated by a red LED) and replacing it with a new module from the stores. No other conditioning is required to bring the replacement module on-line. All modules can be replaced without turning off power.

Network 90 uses a system called "exception reporting" in processing signals. This allows priority to be given to those signals which indicate a deviation from expected norm.

This allows for the fastest possible response time in the event of a problem with any equipment or process.

Applications. Network 90 has proven itself in various marine applications from highly complex operations such as ballasting control from semi-submersibles to very basic data acquisition and reporting procedures. The following are some examples of how this system is applied.

For complex ballasting operations in semi-submersible projects, like the McDermott DB-1102 Heavy Lift Barge, Network 90 controls the pump and valves based on monitoring the list and trim relative to load on the crane, mooring line tension and feed out, current ballast tank status and wave motion. Through an enhanced Multifunction Controller, Network 90 is able to provide simulation by monitoring projected performance against an optimized model of the barge. This procedure is directly applicable to cargo load and discharge of tankers and general cargo carriers as well.

As a propulsion control system, Network 90 can optimize the performance of a diesel plant by as much as two to five percent without reduced manning. By being able, in a single control system, to interact the fuel feed, cooling and lube oil systems proper viscosity, temperature and pressure are constantly maintained with allowances for the varying response time of mechanical devices. This is especially critical with the burning of heavier and dirtier crudes. By integrating vessel attitude while underway relative to optimal hull and running condition, engine maximization can be accomplished on-line in real-time without the need for lengthy stand-alone computer programs.

In older steam plants, even greater savings can be realized. In most cases as much as eight to ten percent savings in fuel consumption.

Through Network 90's Combustion Control, Burner Management and Burner Sequencing packages the ramping effect of fuel usage can be compressed under varying operation load conditions. As with diesel plants above, optimization can be achieved through vessel modeling.

Greater levels of marine safety have been realized through Network 90's Emergency Shut-Down and Damage Control applications, as employed on the ARCO production platforms and the Golar Nor and TransOcean semi-submersible production rigs. Because of the system's flexibility in logic configuration premature shutdowns can be prevented thereby reducing expense, downtime and lost production without sacrificing safety.

Not to be overlooked, throttle control, thrust control, generator load management and integration of other auxiliary systems can easily be handled in Network 90's control schematic.

Not only can Network 90 provide immediate payback as a stand-alone control system, but more importantly, Network 90 can totally integrate these processes into an easily managed vessel/platform optimization network. In the applications described above, Network 90 can generally pay for itself in the first year of operation. When one considers the further reductions in administration and preventive maintenance costs through an integrated approach, payback is more greatly enhanced.

Builders as well as operators can reap the benefits of Network 90 cost reductions. Because of this system's distributed capability, modular design and lack of environmental constraints, 25 to 30 percent installation cost savings have been realized.

This is accomplished through Network 90's reduced space requirements for cabinetry as well as lower material and labor costs in hardwiring to remotely located process and termination units.

Further savings are realized through the layering of communication cabling. Network 90 utilizes a twisted-pair coaxial cable as its data highway linking the various process units. By connecting various Bailey and non-Bailey systems to remotely located process units and linking them through a single set of cabling, time and expenses associated with cable pulling and installation are reduced.

As pointed out earlier, fuel savings of from as low as two percent to as high as 10 percent can realistically be achieved regardless of the propulsion plant or manning.

Improved equipment maintenance is provided through Network 90's flexible alarming and equipment trending analysis capability. It has been estimated that this can save up to 40 man-hours per operating week.

Network 90 has obsoleted "obsolescence." Through its modular design and Bailey's unique Module Replacement Program, system upgrade involves simply the changeout of one module or a series of modules for one with greater capability.

Even interface devices can be replaced without wholesale system replacements. This insures that state-of-the-art technology can always be cost effectively maintained not only in newbuild but retrofits as well.

The maritime industry is not booming, but neither is it dead. This is especially true for the domestic side of that market. Bailey Controls has always been there to lead the way for marine control systems from the first automated boiler controls to the first operational integrated marine management system. We are committed to the incorporation of technology into safe and reliable control systems. We believe that the wise implemention of this type of control system can play a major role in the revitalization of the industry, and not at the expense of people.

For more information, including free color literature describing all the cost reducing benefits available with a Network 90 system, Circle 90 on Reader Service Card 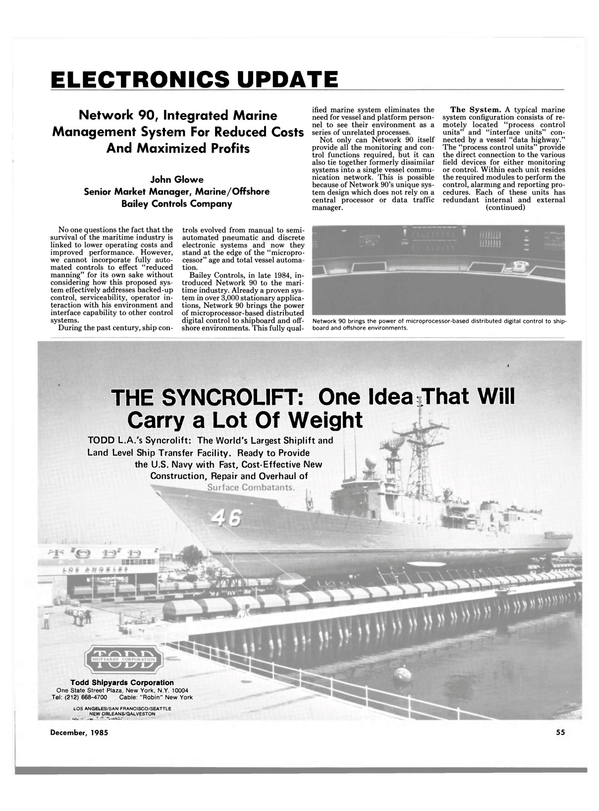