EMD reports the 645FB develops up to 4,000 brake horsepower at 900 rpm. This is an increase of 400 brake horsepower over the predecessor 645EC engine. To achieve the higher horsepower, the "FB" Series engines contain the following design improvements: • The turbocharger has been improved by strengthening the turbine wheel and by the addition of higher capacity gearing to the planetary gear train. The turbine is engine driven at light load when the energy level in the exhaust is relatively low. As exhaust energy increases at higher engine outputs, by use of an over-running clutch, the turbo becomes completely gas driven.

• The crankcase contains features that strengthen the main bearing support frame connection to the base rail and air box structures.

The top deck section has also been strengthened.

A wide foot "A" frame forging extends through the base rail, and an end bar area design provides additional strength.

• The fuel injector has a ,500-inch-diameter plunger that provides an increased injection rate for excellent combustion and thermal efficiency.

The desired fuel output was achieved by revising the helices of the plunger. The injector also includes the "low sac" spray tip that reduces smoke and undesirable emissions.

• The exhaust valve has been strengthened to provide additional protection.

• The engine cylinder retainer system is redesigned and strengthened to increase the bolting load that retains the clyinder head and power assembly in the crankcase. As a result, the service time interval for retorquing the crab nuts has been significantly extended.

Many of the elements contributing to the "FB" Series' ability to generate higher horsepower have already been proven on predecessor engines. These include the rocking wrist pin and bearing assembly that alternately loads and unloads multiple bearing surfaces contained on a single wrist pin and bearing.

The cylinder of the "FB" Series is GM/EMD's laser hardened port relief and upper bore design.

It makes use of the first known large-scale heat treatment process to use laser technology.

Starting performance is significantly improved by the higher compression ratio of the engine. The engine can start in an ambient temperature of —4 degrees C to — 1 degree C (25 degrees F to 30 degrees F) range without starting aids.

EMD states the 645 "FB" Series is the result of painstaking research and development, with particular attention paid to retaining the GM/ EMD diesel's reliability and maintainability while achieving new levels of horsepower output and fuel economy.

A full-color brochure detailing all the advantages offered by the 645FB Series and including full specifications is available at no cost. For your free copy, C i r c l e 2 5 on Reader Service Card 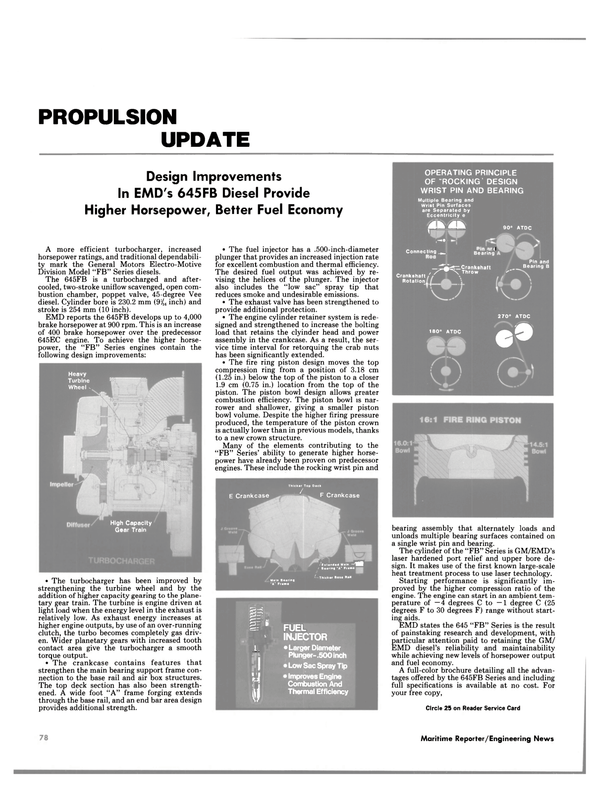