Peter A. Bowe to vice president and general manager. Mr. Bowe joined the company in 1982 as secretary-treasurer. He will continue as treasurer of the parent company. Prior to Ellicott Mr. Bowe worked for the Morgan Guaranty Trust Co. of New York as a loan officer in the Energy Group. He has a B.A. degree from Yale University and a MBA from Harvard.

Douglas J. Piper to vice president. In his new position Mr. Piper will oversee the company's engineering, estimating, and field service activities. Mr. Piper joined Ellicott in 1978 as a project sales engineer, rising to special equipment manager in 1982 and contracts manager in 1983. Prior to Ellicott he spent 11 years with Great Lakes International. He has a B.S. degree in Engineering from the University of Michigan.

McDowell first started with Ellicott in 1966.

He served as field test engineer and project sales engineer before being elected general sales manager in 1982. Mr. McDowell is credited as a principal developer of Ellicott's Bucketwheel Excavator which has become a standard in the dredge mining industry. Mr. McDowell attended the U.S. Naval Academy and graduated from Allegheny College with a B.A. in economics and business management. He also attended George Washington University Graduate School of Engineering.

Prior to that he served in engineering capacities at Mobile Pulley and Kennecott. Mr.

Rose has an engineering degree from Penn State.

Mr. Bowe and Mr. Little explained that the changes were necessary to guide the Dredge Division's current growth in existing markets and expansion in new markets such as hopper dredge design, deep-digging bucketwheels, and the application of sophisticated technology to dredge operations. 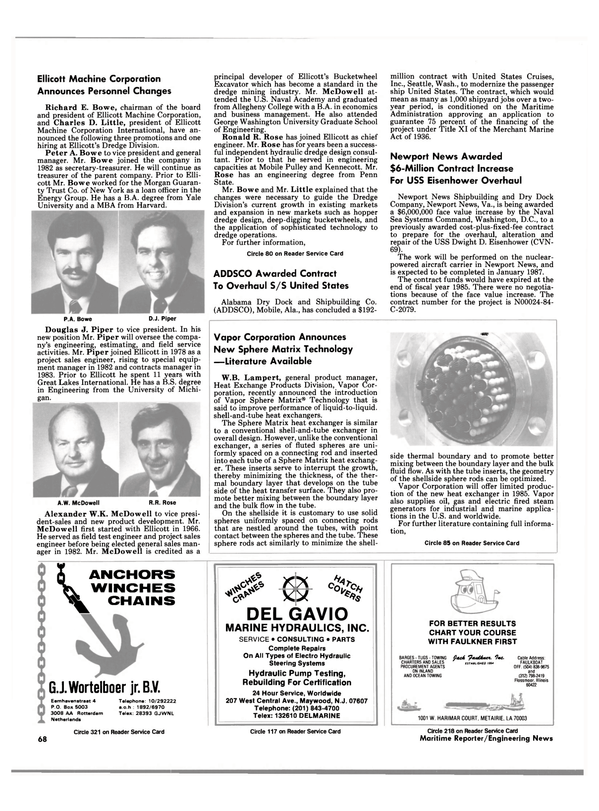