Construction of 'Theodore Roosevelt' Ahead Of Schedule And Under Budget

Advanced Computer Technology And Huge Superlifts At Newport News Shipbuilding Had At Launching Saved $42.1 Million At the launching of the aircraft carrier Theodore Roosevelt, Newport News Shipbuilding president and CEO Edward J. Campbell cited some of the advancements that allowed dramatic savings in time and money in the construction of the latest launched ship of the Nimitz Class. These included computer technology, huge superlifts, and more experience in carrier construction.

He said, "The Roosevelt keel unit weighed 475 tons. It equaled nine keel assemblies on earlier Nimitz Class carriers. The superlift unit you see behind me is the keel of the Abraham Lincoln. It weighs 840 tons, almost twice as much as Roosevelt's keel. It's the equivalent of 20 such assemblies on older carriers." The 1,000+-foot-long, 93,000- ton Roosevelt seems to deserve her many accolades. Thanks to the use of extensive modular design and construction techniques, she is being built far ahead of contract schedule. According to Secretary of Defense Caspar Weinberger, principal speaker at the launching ceremony, the ship's construction was then 17 months ahead of schedule and $42.1 million under budget.

The Virginia shipyard got off to a fast start with the Theodore Roosevelt, the fourth of the Nimitz Class carriers. The yard jumped ahead of schedule by completing in 23 months with the Roosevelt what it took 40 months to complete with her predecessor, the carrier Carl Vinson. The Roosevelt is one of three Nimitz Class carriers now under construction at the yard; the others are the Abraham Lincoln and the George Washington.

Advanced technology has enabled progress to be accelerated since the Roosevelt's keel was laid in late 1981. For the first time at the yard, engineers there used structural Computer Aided Design/Computer Aided Manufacturing (CAD/CAM) to cut the steel for the carrier, helping speed fabrication dramatically.

Once the units came out of Steel Fabrication, they were joined with other assemblies and preoutfitted with much of the piping, ventilation, and electrical equipment they would need.

Computers also controlled tolerences and the manufacturing process so the modules fit together perfectly once they were joined to the ship. The result: the accuracy built into the design function automatically transfers to the manufacturing side.

Another reason for the ahead-ofschedule performance is more extensive use of the yard's 23-story, 900-ton-capacity gantry crane. With it the yard is building larger subassemblies, and putting together the bigger units on assembly platens rather than in the drydock. It is much easier for this work to take place at the shop level.

Preoutfitting was greater on the Roosevelt than on earlier carriers.

Doing advance work and lifting much larger sections results in fewer lifts and saves time and money. A superlift for the Roosevelt, for example, was between 700 and 900 metric tons. In erecting the ship's flight deck, which is 1,092 feet long and 257 feet, wide, 14 multi-ton assemblies were lowered into the drydock. On previous carriers, it took as many as 150 lifts to form the flight deck.

Can computer technology, huge superlifts, and more carrier construction experience continue to pay dividends? Can the success story of the Theodore Roosevelt be topped?

Newport News Shipbuilding thinks so and continues to pursue every new option for increased efficiency and lower costs.

For further information on Newport News Shipbuilding and their facilities, Circle 93 on Reader Service Card 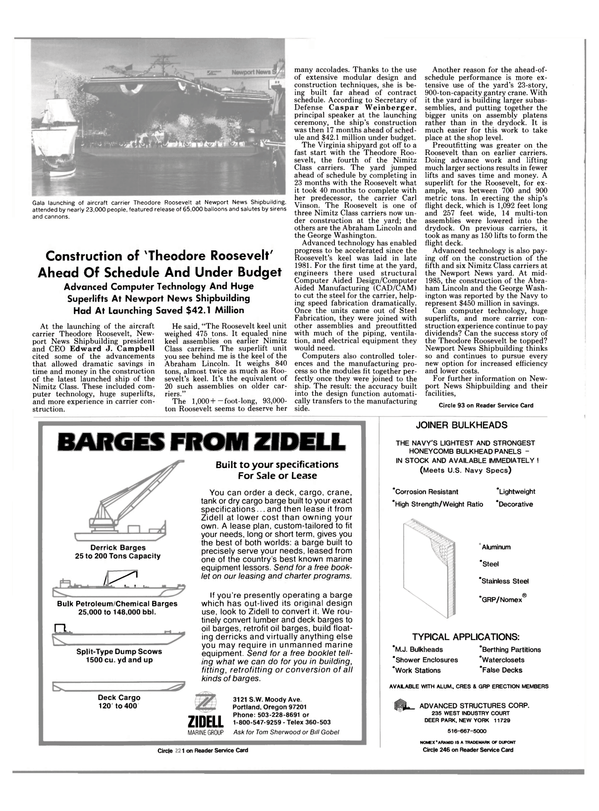 Read Construction of 'Theodore Roosevelt' Ahead Of Schedule And Under Budget in Pdf, Flash or Html5 edition of December 1985 Maritime Reporter