Seebeckwerft AG in Bremerhaven, Germany, formerly the AG 'Weser' yard, recently delivered the Railship II, said to be the largest train/car ferry in the world. The new vessel is now in service between Travemunde, on the Baltic Coast of West Germany, and Hango in Finland.

Railship II was designed and developed taking into consideration all the design factors and the successful operational experience of Railship I, which was built by Rickmerswerft in 1975 and lengthened by Seebeckwerft in 1979. The new vessel has a usable rail length of about 6,185 feet, and is designed for the carriage of railway cars on three decks with five tracks each, and for trailers in the same lines as the railway cars. The aft section of the elongated forecastle deck is used for the carriage of cars.

Access to the ship's cargo area is via a stern ramp that leads to the lower deck. From this deck access to the middle and upper railcar/trailer decks is accomplished by a doublelevel elevator.

Main propulsion is by two MaK 8M601 diesel engines, each with a maximum continuous rating of 10,728 bhp at 425 rpm, suitable for burning heavy fuel. These drive two Lips controllable-pitch propellers via two reduction gears with horizontal offset shafts, reducing the shaft speed to 230 rpm and each with a power takeoff for an AEG shaft generator of 1,000 kw output at 1,800 rpm.

Electrical requirements are further supplied by two generator sets comprising MaK 6M332 diesels driving two AEG generators, each with an output of 952 kw. There is also an AEG emergency generator driven by a Volvo-Penta diesel engine.

Railship II has an overall length of about 612 feet, beam to permanent fender of 72.2 feet, depth to forecastle deck of 62.2 feet, and design draft of 19 feet. She is built to Germanischer Lloyd Class GL + 100A 4E4 +MC E4 AUT for unmanned engine room operation. All necessary controls and alarms for machinery, pumps, valves, etc. are housed in an air conditioned control room.

Other engine room equipment includes an oil-fired boiler, a sewage system suitable for 45 persons, a fresh water generator, and an antiheeling system. 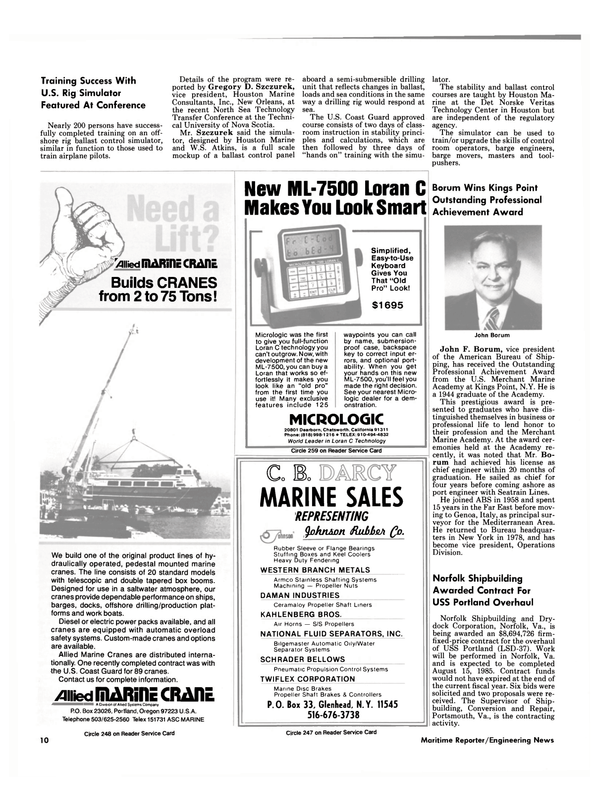