The Port Commission of the Port of Corpus Christi (Texas) Authority recently approved funds for modernization of its existing bulk materials dock. The existing facility includes a bucket type unloader that is also used for loading vessels calling at the port. The Port Commission recognized that a more efficient loadout system would better serve the present users of the facility as well as prospective users.

The concept selected provides for a new loadout facility to be located west of the existing unloading dock.

A new berth able to accommodate vessels ranging from 1,500-ton barges to 100,000-dwt ships will be constructed with three breasting dolphins and two mooring dolphins along the length of the channel. A radial type Sumitomo shiploader, mounted on a curved rail in front and turntable in the rear, will have the capability to move along the length of a vessel at berth, as well as raise, lower, and shuttle the boom conveyor in and out from the bulk- head line. These shiploader movements will permit loading of most vessels without the need to move the ship at the berth.

The shiploader will be fed by a 48-inch-wide belt conveyor system designed to handle 1,500 tons per hours of material weighing 55 pounds per cubic foot. The conveyor system will be fed at multiple points along its length—at two points in the existing stockpile area and at a combination truck/railroad car dumping pit located adjacent to the existing railroad yard.

The pit dump, enclosed in a building, can accommodate a 100- ton, bottom-dump railroad car or three 20-ton trucks that rear-dump through openings in the side of the building. These openings will be closed with overhead doors when dumping from railroad cars. An overhead type, trolley-mounted railroad car shakeout will be provided to speed up railcar unloading.

Material discharged into the dump hopper is fed onto the belt conveyor system by four variable-rate, vibrating pan feeders located under the openings in the bottom of the hoppers.

The belt conveyor system will be protected from damage by tramp iron by a suspended magnet and a metal detector. An in-motion belt scale to record tonnage loaded into ships will be provided to assist in the shiploading operation.

In order to meet the standards of the Texas Air Control Board, the facility will be constructed with a dual dust control system. This system will consist of dust suppression for bulk materials such as coal and petroleum coke that can be sprayed with water, and containment for bulk materials that cannot be sprayed with water. All conveyor transfers will be fully enclosed, and all ground conveyors will be provided with hood covers. Return belt scrapers and plows will be designed and installed to minimize any carryback of material on the return strand of the belt.

Dust collection during the shiploading operation is in two modes.

In the second mode, a trimming spoon located at the discharge end of the spout is used to throw material under the vessel's hatch coamings.

This operation generates more dust. Therefore, the dust is contained in the hold by strip tarps, and is exhausted from the hold through the concentric duct that is raised independently of the spout and spoon and positioned over the openings in the tarps. In this mode, the full air volume of the system (35,000 cfm) is utilized to capture the airborne dust in the hold.

This type of shiploader dust-collection system was also designed by Soros Associates for the new shiploader at the Port of Houston, as well as at Arco Petroleum Products Company's coke-loading facility at the Port of Longview, Wash.

The Port of Corpus Christi recognized the need to expand the new facility in the future without having to shut down the operation. Therefore, the design incorporates space for additional conveyor transfers for both inbound cargoes from rail and truck and outbound cargoes from areas on the site designated for future storage.

The Corpus Christi facility is scheduled for start-up during the last quarter of 1985. 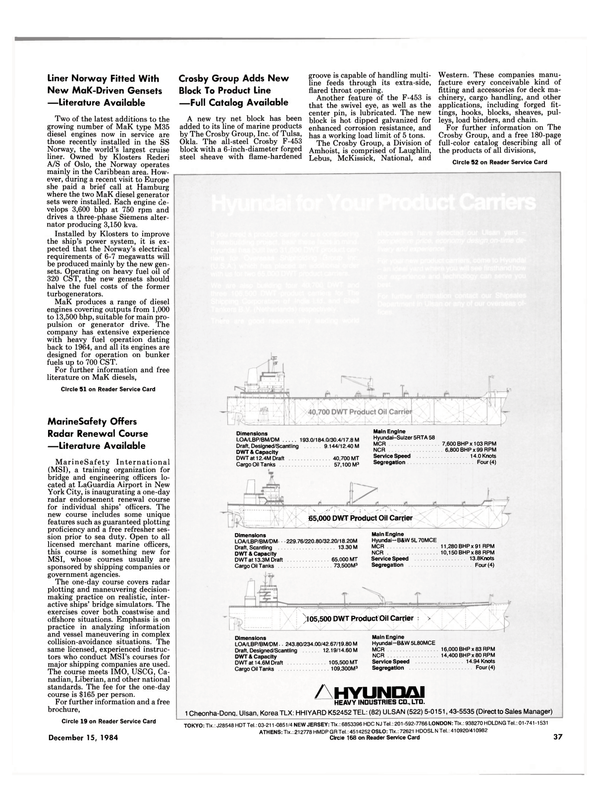