Memphis-April 27-29 The Radio Technical Commission for Marine Services (RTCM) will hold its 1981 Assembly Meeting April 27-29 at the Rivermont Holiday Inn in Memphis, Tenn.

The American River Pilots Association is scheduled to participate.

The RTCM is an organization in which Government and industry cooperate in studies of existing and proposed systems of maritime telecommunications. They have a joint voice in offering solutions for the radio communication and electronic aids problems for ocean, lake and inland shipping, plus the fishing and offshore industries as well as the recreational boatmen.

The RTCM assembly symposium sessions are geared to the interests of a broad spectrum of communications people, ranging from management to operating personnel.

Technical Sessions A wide variety of technical papers will be presented during the Assembly. Among them are: "The Future Global Maritime Distress and Safety System" by G.F. Hempton, Federal Communications Commission.

Synopsis — The Maritime Mobile Service is the oldest radio service and the maritime distress system goes back almost 70 years. Essentially our present distress and s a f e t y system is not much changed today. The IMCO Sub- Committee on Radiocommunications on October 3, 1980 approved the "Requirements of a Future Global Maritime Distress and Safety System." This new system is in support of the new Search and Rescue Plan, uses new technology, emphasizes ship-shore instead of ship-ship alerting and is expected to be fully operational in 1990 or shortly thereafter.

Many details remain to be developed.

Synopsis—At present there is an explosion of development in data communications technology. The operators of these systems need to be aware of the special problems and unique advantages that data offers. This paper presents some of these. There is a tendency to adapt the land-developed data-communications equipment to shipboard use without appreciating the difference between a ship's radio room and an airconditioned office. The home office is the final impact area. Bringing a wealth of real-time, accurate data to the home office is easy.

Instituting management policies to extract the potential advantages from this data is more difficult.

Some technical and nontechnical aspects of this capability and its impact on the home office are presented.

Synopsis — During the Special Preparatory Meeting of CCIR in 1978 there was a suggestion from the United Kingdom that 12.5 kHz channel spacing should be adopted for maritime VHF. There was a great deal of opposition, based primarily on the reduced range and reduced interference protection which would result from the use of a lower modulation index. Instead, when the debate on channel spacing was concluded, the SPM Report included a general statement that rather than concentrate on deriving more channels per MHz, research effort should be directed to making possible more messages per MHz in a given geographical area. It will be seen that under some circumstances channel splitting improves the situation and in other cases it worsens it.

Synopsis — Marine telecommunications by radio enters a promising era during the decade ahead, thanks to the recent availability of geosynchronous earth-orbiting commercial satellites. Networking breakthroughs will be the most significant single advantage with Memphis-April 27-29 the advent of space transponders available for marine facilities.

Today a ship equipped with a MARISAT terminal can speak with another ship on the oceans of the world via a space telephone network. Similar switching circuits will soon connect participating marine telephone facilities across the nation. Rather than each individual vessel having to equip with precision and costly tracking mechanisms and satellite terminals, only the marine telco facilities will relay to and from the satellite, thereby saving time and expense with the economies of scale inherent in volume calling.

Synopsis—This paper introduces the Color Plotter which indicates the ship's track overriding on the latitude and longitude lattice. The track is displayed in manually selected one color out of seven (green, red, blue, yellow, cian, magenta and white) colors. This feature is very convenient to distinguish the newest track from the past one, especially when the ship sails in the same area. Such a unit as the Color Plotter is very useful and attractive for those who are sailing but are not professional seamen. In this report, the construction, special features and also the experience of the author with this unit are described.

Synopsis — Vessel traffic conditions on a major portion of the Lower Mississippi River are being studied by the Louisiana State University Center for Wetland Resources. The study objective is to determine appropriate techniques, systems, etc., to provide the safest and most efficient marine traffic flow in the study area. The study is being carried out under a grant from the National Sea Grant Program. Various aspects of the river, including its geography, traffic density, accident patterns, Navaids, and RF communications are being studied. The study team has conducted an extensive survey by questionnaires and interviews of those who use the local waterways.

This paper presents major communications aspects of the study and the study team's conclusions.

Synopsis—The paper on Canadian preparations for the International Telecommunication Union World Administrative Radio Conference, Geneva 1982, will present the background of the development of Canadian proposals, some of the alternatives considered in various topic areas and the reasons for the choices made. Particular subject areas to be dealt with are: channeling of the HF maritime mobile radiotelephone service; use of the new shared bands at 4 and 8 MHz by the maritime mobile service; the future Global Maritime Distress and Safety System; navigational and meteorological warnings to ships by coast stations using narrowband direct-printing telegraphy, and common frequencies in the MF bands for use by coast radiotelephone stations for communicating with ships of other nationalities.

Synopsis — Five Coast Guardsponsored research reports from 1977 through 1980 examined causal factors in collisions, ram- mings and groundings. Mechanical failures account for only six percent of collisions and 12 percent of groundings and rammings.

Human factors cause 80 to 85 percent of the accidents. In the collision cases alone, 85 to 90 percent is more accurate. The importance of the ship-handling problem fades into second place behind communications. There are two major types of communications failures. The first major type is failure to achieve a workable passing or overtaking agreement. The second major type of communication problem is a failure to make "security calls" before proceeding around blind bends. The problem involves some technical elements, but it is dominated by psychological, sociological and institutional components.

"Of Computers and Ships" by C.S. Carney, Nav-Com Incorporated.

Synopsis—Inexorably the course of computers and ships are converging and this comes as no surprise.

The surprise, though subtle, is one of philosophy in the application of computers on ships.

Processor and microprocessor controlled equipment are in abundance, but each specialized to the needs of an individual unit. Seldom are large, or even small, computers seen on ships which tie together diverse equipment into a common computerized system.

The subject of this paper is the use of a central computer in an unusual communication suite on an unusual ship. Although it might be difficult to make a commercial justification of such a system in 1981, there is food for the mariner's thought in adjusting to the revolutionary changes which have been made and are yet to come.

In some cases, the technology exists, but the components need to be fused together in a usable order. The Collision Avoidance Warning System described in this paper is such a multiple solution. Mid-ocean collisions do result, and COLAW provides a simple means of alerting two ships that the distance between them is close enough that caution should be exercised to avoid collision.

Although the frequency reservation for the system described in this paper is available for one usage, the 1982 Mobile Services WARC must authorize additional (but not interfering) use for the frequency. Thus, action needs to be begun now for ITU action in 1982.

Synopsis — This paper discusses the basic trilateration system for marine position fixing with dependence on range accuracy and geometric dilution, the influence of geometric angles on position location. Equations are developed and summarized for expressing the accuracy of location by ranging to two targets or survey points. Errors relative to the error parallelogram and error ellipse are compared. The expansion from trilateration to multilateration systems, the repeated application of trilateration, is then demonstrated with configurations, equations and processing techniques, smoothing, to demonstrate accuracy limitations.

Synopsis — Deck officers are responsible for the safe navigation and passage of both the vessel and cargo. Present and proposed rules are specific about the need and the use of shipboard radar equipment. Rules recently proposed by the U.S. Coast Guard for Radar Observer Endorsement Demonstration of Skills places a burden on the maritime industry to provide simulator-based examinations for Radar Observer Endorsement and renewals. Presently, training schools capable of providing this testing of skills are limited in number and facilities.

ULTRAtec has designed a l o w - c o s t radar-training system suitable for both training in basic radar scope interpretation and operation, and for demonstration of skills for the Radar Observer Endorsement renewal.

Synopsis — The countries along the borders of the Rhine River came together in order to try to regulate several rules for ships sailing the River Rhine in the early 1960s. These ships are only allowed to proceed in reduced visibility in case the ship is equipped with: a special type approved Rhine-River radar, a VHF, a rate of turn indicator and a radartrained person is onboard. It seems now that within a year or two all cargo passenger ships on all inland waters will have to comply with these rules. This paper describes these special units, designed for use by the river vessels.

"The Next Generation SATCOM Terminal" by R.K. Smith and G.S. Jones, Navidyne Corporation.

Synopsis — The 1980s will be a decade of sustained growth in the use of marine satellite communications.

This paper compares characteristics and technology of the first and next generation SATCOM terminals and describes an operator's console using a CRT display and digital keyboard. 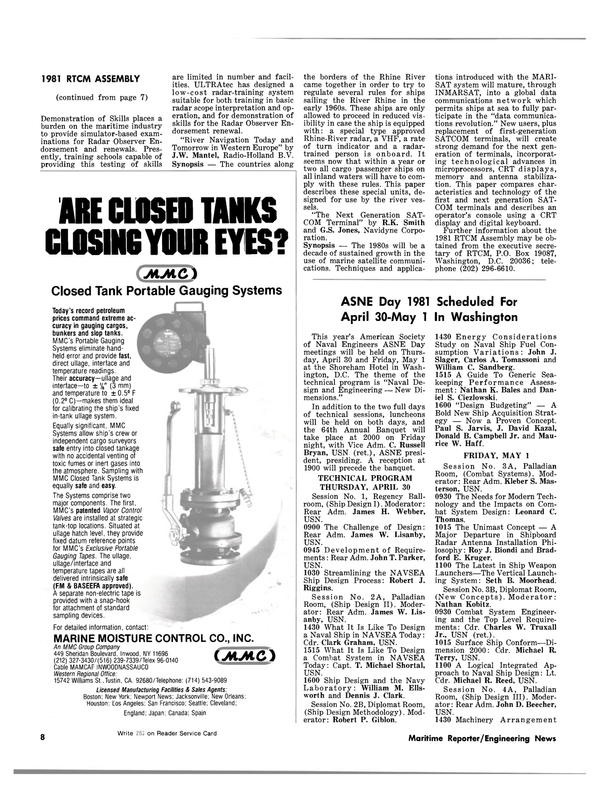