This article deals with the efforts of Nippon Kokan K.K.

which, in collaboration with the Japan Marine Machinery Development Association, tried to develop, by fully utilizing modern techniques, sail-equipped motorships that can operate under present-day conditions. The research and development was started in 1978 and extended over a period of more than two years.

It included wind-tunnel tests, the design and manufacturing of sails, sea trials of the experimental- ship Daioh, and feasibility study based on these test results.

1. Its energy conservation effects must be high, utilizing a wide range of wind forces effectively.

2. It must be mechanized and a special crew should not be necessary.

The equipment should not obstruct cargo handling.

3. It should maintain the safety of the crew and cargo on the same level as on conventional ships.

4. Its maintenance and repair work should be reduced as much as possible.

Various kinds of wind-propulsion equipments were assessed applying these criteria, and it came to the conclusion that using wind energy directly as a propulsive force by sails was the most effective and practical method for employing this natural power.

From the viewpoint of aerody aerodynamic performance, fore-and-aft sails including semirigid wing sails, and square sails, including slotted sails, were considered the most promising candidates for sailing equipment for commercial ships.

Also, in consideration of the general applicability of the sailing equipment, the following conditions were added: 1. It should be applicable to ordinary motorships without any special countermeasures.

2. It is used as auxiliary power, with the aim of reducing the fuel consumption of the engine, since modern commercial ships need a relatively high speed and punctuality.

2. Energy conservation capability — Conservation of over 10 percent in fuel consumption.

3. Mechanization and automation of the equipment.

Development At first, wind tunnel tests were conducted systematically to investigate the aerodynamic characteristics of various sails. Development of sailing equipment for the experimental-ship Daioh was based on these results and performance of the selected sail was repeatedly checked by the wind tunnel tests, on-shore tests, and sea trials.

The validity of the estimation method used to predict the power gained by use of sails onboard the ship was verified by comparing the data obtained during the sea trials with the estimated value.

The various parameters related to sail form were determined after considering both the construction costs and the various objectives and by referring to the results of the wind tunnel tests. As a result, three types of sail were selected for the experimental-ship Daioh: One set of rigid sail from the standpoint of the best sail performance, one set of soft sail from the standpoint of the low cost, and one set of triangular sail to manage the head wind.

Although all three types differ in certain respects, their operations were mechanized in preparation for adopting full automatic operation in the future.

At the same time, studies on maneuverability and stability were thoroughly conducted and rudder area and bilge keels enlarged.

Tests On Daioh Before carrying out the sea trials, tests were conducted onshore to check whether the data obtained from the wind tunnel tests could be utilized for estimating the performance of the sails on the Daioh. Strain gauges were installed at four points at the bottom of the mast for the rigid sail to measure the force on the sails through the strain on the mast.

Sea trials were conducted to determine whether the various estimated performance assumed from the results of the wind tunnel tests could be applied to the actual ship, that is, whether the three mechanized types of sails would operate as planned.

These deviations between the estimated ship speed and the measured ones in both cases were thought to be mainly caused by the assumed conditions utilized in estimating the ship speeds.

Then the ship speeds were estimated again using actual data on the angle of attack of the sails, drift angle and the rudder angle that were obtained at the sea trials. Also, the wind force acting on the hull neglected before was taken into consideration and the data obtained at the wind tunnel tests were utilized.

When the ship ran under both the engine and sails, the measured ship speed conformed to the estimated speed accurately enough and it was proved that the sail performed well as the results at the wind tunnel tests.

On the other hand, when the ship ran under sails only, there were still approximately 10 percent deviation between the estimated ship speed and the measured speed. The reasons for this deviation were thought to be bad steerability due to stoppage of the engine, intensification of the effects of the waves, wind velocity and wind direction due to the slow speed. To analyze these effects quantitatively from only the data obtained is difficult, but the causes were made clear and more accurate estimation can be expected when the ship runs under the sails only.

Target Ship In conducting studies on the possibility of producing a sailequipped motorship that satisfies the conditions given and while simultaneously considering the popularization of sail-equipped motorships, outline specifications of sail equipment like those for conventional ships were determined.

Developing a sail-equipped motorship was based on the following motto: "Main: Engine; Auxiliary: Sail." In regard to this, actual propulsion control offers two possibilities: (1) constant ship speed, and (2) constant engine output. In the former case, since ship speed is constant without being affected by wind direction or wind velocity, engine capacity should be identical to that for conventional ships, and the objective should t h e r e f o r e be economy of fuel consumption due to the horsepower gained from the sails. On the other hand, with the latter type, if engine output is constant, ship speed is not constant as it depends on wind utilization.

However, if the average ship speed throughout the entire voyage is the same as in (1), it becomes possible to use a smaller main engine than is used on conventional ships.

After comparing the two possibilities and considering the implications of propulsion control concerning ship schedules, it can be seen that possibly (1), in which the ship speed remains constant, is far more practical.

In the case of the speed being kept constant, the relationship between the propulsive power of the sails and main engine output is as shown in Figure 2. The main engine is controlled in such a way that total output will be constant as much as possible.

Conclusions T h r o u g h these studies and tests, main results were obtained as follows: 1. The sail-equipped motorship in which sails are used as auxiliary (not as main) source of propulsion seems to be most feasible at the present stage.

2. Laminar flow type rigid sails which were mechanized fully were found to be one of the optimums for practical sail equipment.

3. Considering the increase of the fuel oil price in the future, sail-equipped motorships seem to be economically feasible at this time, by the effect of the costdown of sailing equipment.

Ocean transportation is in a state of emergency due to recent rapid increases in the price of fuel for ships and to the growing uncertainty of fuel supply, both of which have made it imperative to take measures for the conservation of fuel. Under such conditions, the re-emergence of wind force as a natural source of energy for the propulsion of ships through modern techniques has become of g r e a t s i g n i f i c a n c e.

Even during the period of two years while this research and development was being conducted, the petroleum situation has undergone drastic changes. These conditions indicate that the time is fast approaching when sailequipped motorships will become feasible on a commercial basis.

As a result of feasibility studies made using a 10,000 to 35,000- dwt bulk carrier, the first stage of the development process, it was established that this type of ship can be operated profitably.

However, when the actual equipping of the ship was considered, there were and still are many problems to be solved regarding maneuverability which must be studied in more detail; maneuverability in docking, mooring and when in harbor movement; the crew needed for this type of ship and their mastery of the operational techniques; the selection of the most suitable routes for specific voyages, etc. Solving these problems has thus become the task that will be undertaken during the second stage of the development process.

Fortunately, a prototype of a sail-equipped motorship for which various experiments are scheduled and on which high expectations are placed is planned for completion during 1980. 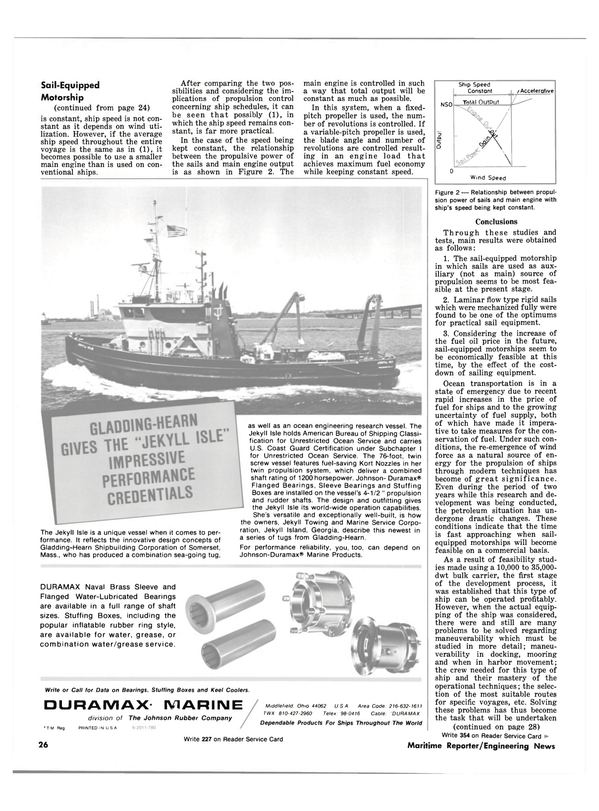