The Carolina, a 55-foot aluminum pilot boat, was christened recently by Mrs. Ernest F. Hollings, wife of South Carolina's Senator, for the Charleston Branch Pilots Association. The ceremonies at the Carolina Yacht Club in Charleston were attended by the Senator and more than 200 guests, and were followed by a reception hosted by the pilots and their wives.

Prior to the christening, the Carolina had been delivered from Massachusetts where it was on display at the American Pilots Association convention in Boston.

The boat was built by Gladding- Hearn Shipbuilding of Somerset, Mass., and designed by C. Raymond Hunt Associates of Boston.

George Duclos, Gladding-Hearn vice president, and Winn Willard of Hunt Associates represented the builders and designers at the christening ceremonies.

An identical boat, the Palmetto State, is nearing completion at the Gladding-Hearn yard, and will be delivered this year. The two all-aluminum, high-speed boats will allow the pilots association to provide upgraded service for the port of Charleston, according to Association president E. Randall Swan Jr.

The boats' design is based on a high deadrise or deep-V hull for safety and comfort offshore in all weather. They are the first highspeed, all-aluminum boats built by Gladding Hearn in its 25 years of pilot boat construction.

The boats are divided into five watertight compartments with access via watertight doors. Forward is a crew's quarters and toilet compartment with shower.

The pilothouse is midships forward of a pilots' lounge with complete galley. Aft is the pilots' sleeping quarters. 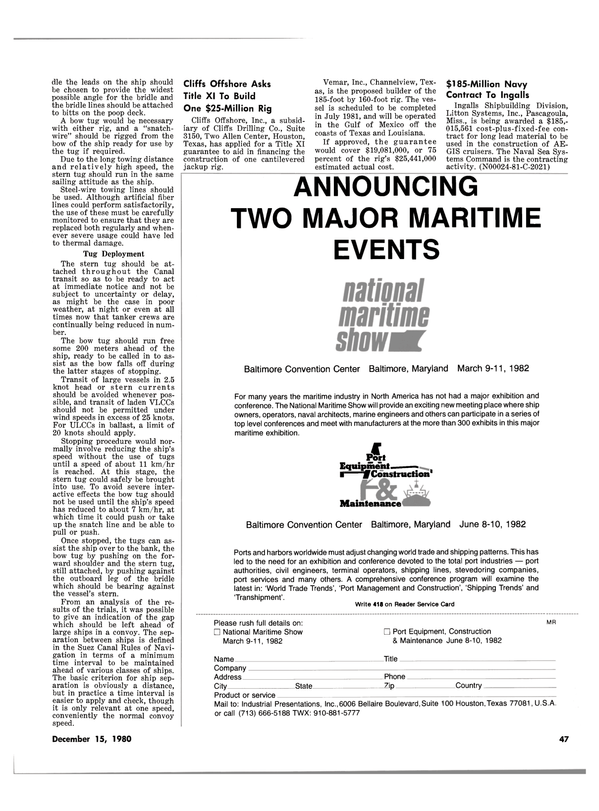