A recent report on "The Economic Impact of the U.S. Shipbuilding and Ship Operating Industry" by Data Resources, Inc.

(DRI), commissioned by the Shipbuilders Council of America, demonstrates that the net effect of building ships in the U.S. is significantly positive. The following is a digest of the DRI report purposes, methodology, assumptions and findings as it appeared in a recent issue of the Council's publication "Shipyard Weekly." Purposes: (1) General: To establish credible . analytical mechanisms for measuring the economic impact of various maritime policy options g i v e n a s s u m p t i o n s concerning (a) Size of U.S. merchant and Naval fleet; (b) U.S. vs. foreign construction of merchant ships; (c) U.S. vs. foreign financing; (d) Tax and subsidy structure; (e) Change in government spending occasioned bv policy options.

(2) Specific Tasks—For the 1980- 1990 Period: (a) To determine the economic impact of increased U.S. naval ship construction and U.S.-flag commercial ship construction and operation over the expected baseline (89 merchant ships) in the absence of any policy change; (b) To assess the impact of building ships in the United States with constructiondifferential subsidy (CDS) as opposed to building abroad for operation under U.S.-flag with o p e r a t i n g - d i f f e r e n t i a l subsidy (ODS).

The model then calculates the net economic impact, which is disaggregated by the DRI input/ output model to obtain industry detail which, in turn, is used to calculate regional impacts.

Results of Increased U.S. Naval and Merchant Marine Program: (1) Assumptions: (a) The U.S.

adopts a policy enabling U.S.-flag owner/operators to hold present market share of trades with developed countries and to attain the following shares of U.S. trade with developing countries of the 1980-90 period—liner, 40%, dry bulk, 20%, short haul liquid bulk, 20%, long haul liquid bulk, 10% ; (b) This policy would result in building approximately 300 commercial vessels, in addition to baseline fleet forecast, for U.S.- flag operation over the period. All ships would receive CDS, ODS and Title XI mortgage guarantees; (c) The naval program would be expanded from 67 to 96 ships over the 1980-84 period and naval expenditures would remain at the increased level for the 1985-90 period; (d) The Federal budget would not be increased to fund additional CDS and ODS outlays, rather other programs would be reduced (prorated for each major category of government spending). (2) Net Impact on Total U.S. Economy of the Expanded Maritime Program in 1980-1990 Period: (all expressed in 1978 dollars) (a) GNP would rise by $17.2 billion; (b) Investment in durable equipment would rise by $15.2 billion; (c) Net nonmerchandise imports would fall— down 1.77c by 1990. As balance of payments improves, pressure on the dollar would ease; (d) Inflation impact would be nominal (about .02% average) ; (e) Annual Federal deficit would fall by $1.3 billion average; (f) Net employment increase in shipyards and supnorting industries would total 1,846,000 man-years. (3) Major Related Tndustrv Impacts Over the 1980-1990 Period: (final sales and employment) ; Results of Policy Encouraging U.S. Versus Overseas Construction of U.S.-Flag Commercial Ships For Operations With ODS: (1) Assumptions: (a) Same 300-ship incremental program as described above. Naval program would be held constant (at expanded level) so as not to affect results; (b) First round Federal expenditures would be held constant.

In the case of building abroad, CDS savings would be reallocated to other governmental programs.

(2) Net Impact on the U.S. Economv of Ruilding the Ships in U.S.

With CDS Instead of Abroad: (1978 dollars) (a) GNP would rise $15.3 billion over 1980-90; (b) Domestic investment would rise by $19.8 billion. The fact that the investment would exceed total GNP impact indicates that the policy creates a ship from consumption to investment as well as increasing overall economic welfare. Further payoff in the form of downstream productivity improvement could also be expected (c) Nonmerchandise imports would be down 1.1% by 1990; (d) Inflation impact would be nominal (about .03% average) ; (e) The Federal deficit would decrease by an annual average of $1.7 billion over the period. It should be noted that the Federal deficit would be reduced even if the Federal budget is increased to fund CDS. Initial outlays would be higher, but subsequent tax revenues would more than recoup initial CDS payments.

It should be further noted that the results presented here are very conservative with respect to the total economic impact of the U.S. shipbuilding industry. A decision to fund all or part of the program by increasing the Federal budget would boost sales, GNP and employment effects dramatically.

For example, in the combined Navy/commercial program, net GNP increase would total $64.5 billion over the period and net increase in employment would exceed 4,000,000 man/ years, if the entire cost — $24.9 billion in naval spending and $8.7 billion in increased subsidies — is funded from increased government spending. 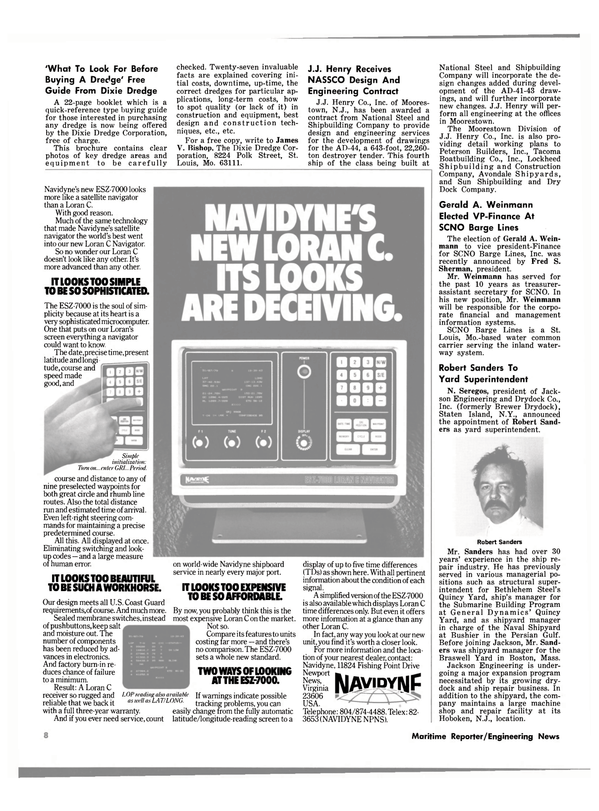