According to Mr. Webb, who is also vice president of Ingram Corporation, all five vessels will be built by NASSCO in its San Diego shipyard. The first vessel is scheduled for delivery in April 1982, with the remaining four vessels scheduled over the subse- Highest quality and unexcelled dependability have been hallmarks of all Hose-McCann equipment for over 30 years. Hose-McCann Signal and Alarm Panels are available for every shipboard application. Built to specifications and conforming to AIEE and U.S. Coast Guard regulations, these panels are manufactured in any size in flush or surface mounting types. With both builtin and separately mounted audible alarms, all units are designed for fast, easy installation.

quent three-year period. Cost of the first vessel is fixed at approximately $51 million, and the remaining four are at a base price of approximately $47 million each, subject to escalation.

The contract is subject to cancellation if American Tankships does not obtain a financing guarantee from the United States Maritime Administration by May 31, 1980.

In addition, American Tankships has the right under the contract to cancel any of the last four vessels up to stated dates between September 1980 and June 1982.

The vessels to be constructed by NASSCO represent a new class ship with an overall length of 658 feet, a beam of 90 feet, and a fully loaded draft at 36 feet. Mr. Webb also announced that each of the vessels will be powered by a Sulzer slow-speed diesel. 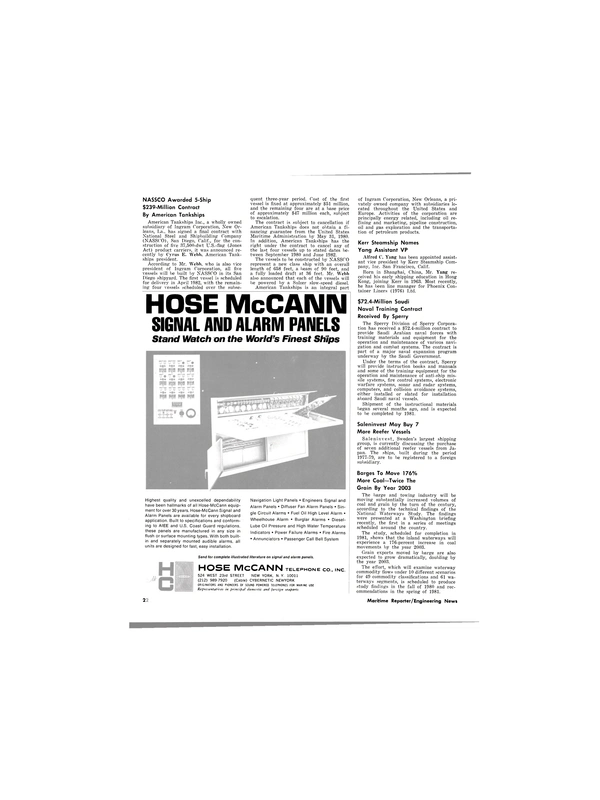