MTR Speaks with Harlan Doliner Ahead of His OINA Panel

Harlan Doliner, Environmental & Maritime Attorney at Verrill Dana LLP, is an organizer and panel member of the “Frontiers of Technology Transfer Panel” at the upcoming Oceanology International North America 2017 in San Diego.

What do you consider to be the key challenges to technology transfer between i.e. naval applications, to marine science and ocean research applications?
From my perspective one of the biggest challenges is the tendency to “silo” or compartmentalize new technologies into existing applications or areas of endeavor. The Naval Undersea Warfare Center has set a wonderful example of getting past this in its commercial application of enhanced sonar processing to digital mammography enhancement. Another major challenge is determining the correct business model between the parties involved in each instance, including protection and/or sharing of IP, intellectual property. A key regulatory challenge in the U.S. is compliance with export controls, including ITAR (International Traffic in Arms Regulations).
Environmental issues are a driver for all in the sector, and collaboration between commercial and scientific entities is growing, but scientific need and commercial realities do not always coexist well. Discuss strategies you have seen that allow science and business to prosper together.
Collaboration, including data sharing, between ocean researchers and industry is undergoing fundamental, structural changes as accelerating technological advancement (think smartphones and smartphone apps, e.g.) facilitate the explosive growth in data and data points via “citizen science,” pushing coastal, oceanic and marine tech research further into the realm of “Big Data”. Strategies are just beginning to evolve to leverage these changes to augment and leverage the always-vital, traditional models of research vessels equipped with specialized technologies operated and maintained by specific experts.
In the case of the offshore energy industry, where markets have been depressed for more than two years now, have you seen a proportionate reduction in scientific activities with oil and gas companies? If so, what are some suggestions to ‘bridge the gap’?
While I’m not in position to expertly comment on the downturn on the oil and gas side, it is clear that there is now a sustained, worldwide momentum for research, development and commercial investment in coastal and offshore wind and hydrokinetic (tidal and wave) energy projects for both utility-scale and distributed generation.
Is there enough collaboration between government and business in terms of technology transfer for commercial use and environmental issues? How could this stream be improved?
There is never enough collaboration, as there always can be more. The fundamental key is communication, which makes gatherings like OINA ’17 so important, as it crosses the usual divides between government, industry and academia, as well as between commercial and environmental communities.
How can we persuade a greater number of diverse and competing organizations that working together will result in mutual benefits?
Many of the acoustic technologies originally intended to have only military applications are now used for basic ocean data gathering and research. Consider how the free world’s globally-deployed network of submarine detection devices evolved into IOOS, the International Ocean Observation System, that now warns of tsunamis, and provides information assisting responses to climate change and the impact of the opening of the Arctic upon marine mammals and other sensitive receptors.
What do you hope to achieve through your involvement in the Frontiers of Technology Transfer Panel at OI NA ’17?
I hope that our panel, combined with networking and, most important, listening to attendees’ views, concerns and questions will engender new connections that will grow into mutual opportunities going forward. That won’t happen if we stay home.
(As published in the January/February 2017 edition of Marine Technology Reporter) 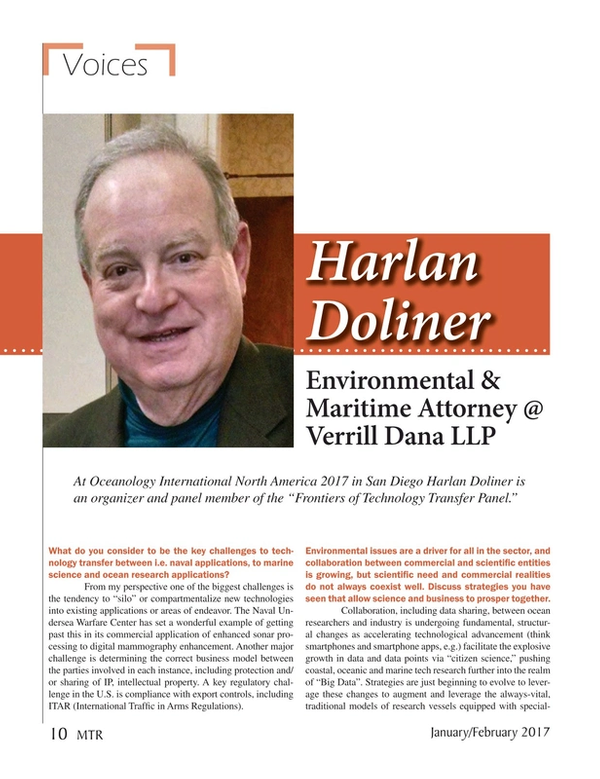 Read MTR Speaks with Harlan Doliner Ahead of His OINA Panel in Pdf, Flash or Html5 edition of January 2017 Marine Technology