ROV Seamor Evolution of a Brand

Originally developed in the mid-1980s by two Canadians, Seamor was intended to become a simple, low-cost, underwater “flying” video camera system that could be easily deployed from a small boat and enjoyed by those who wanted to enjoy the underwater world without getting wet – a “Recreational ROV.”  Today, more than 30 years later, that market is still in its infancy.
The first Seamor prototype consisted of two aluminum tubes strapped to an aluminum frame. One tube housed a color video camera (the size of a chimney brick) and the other an incandescent floodlight.  Each tube was also fitted with a variable speed thruster at the rear (sewing machine motor c/w model airplane propeller).  The ROV was surface powered and controlled via a 100 ft. “off-the-shelf” multi-conductor cable and a crude power supply/control system.  A small portable TV set completed the system.
While the initial version of Seamor provided many hours of enjoyment at a small cost, it soon became evident that being constrained by the depth and scope of the tether cable was an undesirable limitation – particularly when the wake from a passing BC Ferry was encountered.
Several months later a completely redesigned Seamor was produced.  This unit incorporated three redesigned thrusters, two horizontal and one vertical, along with a tilting camera/light housing, all mounted on a welded aluminum frame.  Initially neutral buoyancy was achieved using a “Grimsby” float attached to the tether.
The months turned into a couple of years and many improvements to Seamor until, in 1989, Inuktun Services Ltd. was formed to manufacture the production version of the ROV Seamor for the industrial sector of the “low-cost” inspection ROV market.
The development of ROPI, a “custom ROV” project started in 2002, resulted in the introduction of a completely redesigned, more powerful and technically advanced Seamor which became one of Inuktun Service’s growing modular mobile robotic systems products.
In 2006 Mr. Robin Li, then an employee at Inuktun with both an MBA and an Engineering degree in his pocket, successfully negotiated the purchase of the ROV Seamor brand and associated technology and started Seamor Marine Ltd. As the name implies the business activities of Seamor Marine Ltd. are specific to the ongoing development, manufacture, global marketing and sales of the ROV Seamor and related system components.  In addition to advancing its technologies and providing system enhancements, a primary goal of the company is to maintain the modularity inherent across the range of ROV Seamor models.  Each system incorporates standard modules that are common with other models, a feature that not only permits component swapping between models, but also facilitates system customization without the usual associated excessive costs.
The Seamor brand currently comprises four standard ROV models as well as a full range of components and related accessories.  All of the ROVs can be hand-deployed and operated, by one or two people, from a pier or small craft and are depth rated to 600m/2000 ft.  A recent addition to the portfolio is the 7F-H-ARM, a self-contained 7-Function Hydraulic Articulated Robotic Manipulator.  One of the smallest skid attachment hydraulic manipulators on the market today, this unit can be employed as a stand-alone subsea robotic system, or readily skid mounted and paired with a Seamor.
This system is self-contained system designed to be easily mated with virtually any ROV system of a similar size – just provide a six-pin connector interface for surface power, RS485 communication and gripper camera; attach the skid-mount unit to the ROV; make appropriate buoyancy adjustments, and go to work.
In addition to the skid-mount, dexterous arm and gripper, the 7F-H-ARM incorporates intuitive programmable position controls, gripper camera, and control unit complete with dedicated LCD touch screen controller/video monitor and joystick control.  An indexing sample carousel is also available as an option.

(As published in the January/February 2013 edition of Marine Technologies - www.seadiscovery.com) 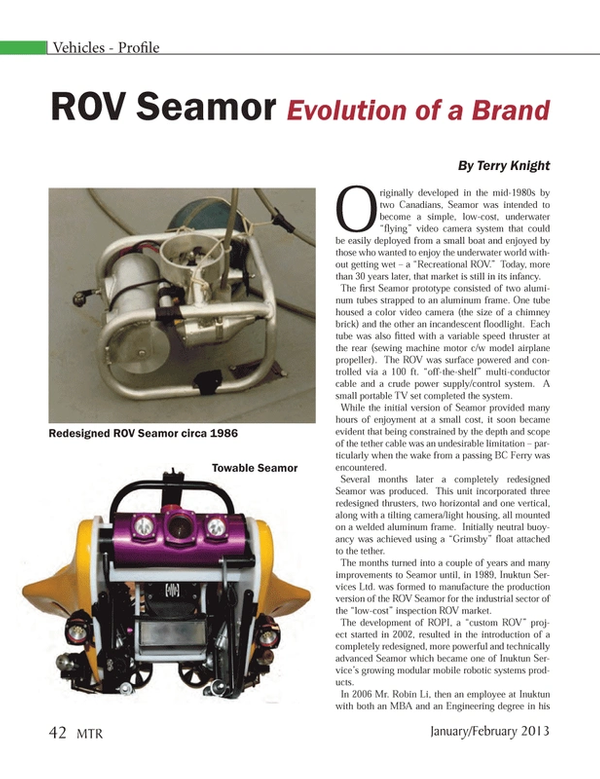