For Fireboats, The Heat is On

These days, cost-conscious municipalities across the fruited plain, from sea to shining sea, are ordering new waterborne assets to cover their many local responsibilities. When they do, they want ‘more bang for their buck,’ combining multiple missions – and the equipment that makes it all possible – onto one hull. That’s a tall order on the typically compact patrol boat style hulls that tend to be big on performance, but short on space for equipment that can demand a significant physical footprint. One such shipbuilder stepping up to plate to deliver on a raft of promises is Gulf Coast-based Metal Shark. Significantly expanding its presence in the fireboat market with a diverse range of fireboats currently in production for multiple customers, the company recently has announced a contract for a custom “70 Defiant” fireboat to be built for Canaveral Fire Rescue in Cape Canaveral, Fla.

“The 70 Defiant is the result of the latest thinking in fireboat design and will provide a significant capability boost for Canaveral Fire,” said Dean Jones, Metal Shark’s vice president of sales for law enforcement, fire rescue, and specialty markets. “From the selection and integration of firefighting systems to the layout of the vessel’s fire control center, operator input was vital and significantly influenced the vessel’s configuration. Heavy emphasis was placed on accessibility and overall ease of use, and the result is a purpose-built fire fighting machine with next-level capabilities and a crew-friendly layout that firefighters will love.”

U.S. municipalities and first responders increasingly want a versatile platform that can pack numerous missions into one hull. The folks at Port Canaveral are no different. To that end, this vessel’s design incorporates a positive-pressure Chemical, Biological, Radiological, Nuclear, and high-yield Explosive (CBRNE) system to provide crew protection during disaster response scenarios. A complete suite of electronics including an M400XR FLIR thermal imaging system with fire fighting software will provide next-level situational awareness.

Metal Shark offers the 70 Defiant with a wide range of propulsion packages enabling the vessel to achieve top speeds of 45+ knots. Canaveral’s vessel will be powered by quad 800-horsepower Man diesel engines mated to quad Hamilton water jets. This configuration will deliver a cruise speed in the 30-knot range and a top speed of 35 knots. The Canaveral order comes amid a significant expansion by Metal Shark into the U.S. fireboat market. In April, Metal Shark announced that it had been selected to build the next generation of fireboats for the Miami-Dade Fire Rescue department, with a multi-boat order for 50’ Defiant-class pilothouse fireboats currently in production. Significantly, the new Miami-Dade fireboats are being built alongside a diverse assortment of custom fireboats for other operators including 27’, 29’, 32’, and 38’ pilothouse vessels as well as 23’ and 26’ center console vessels.

“Metal Shark is winning new fire rescue customers with a broad portfolio of fully custom fireboat platforms that allow firefighters to respond faster and do their jobs more safely,” said Metal Shark’s CEO Chris Allard. “We welcome all fire rescue agencies to see for themselves the many advantages our proven fireboats have to offer.” Those advantages today are deep. With three fully self-contained shipbuilding facilities in Alabama and Louisiana USA plus a dedicated engineering facility in Croatia, Metal Shark’s 500+ employees produce over 200 vessels annually. That said, they’re not the only builders in this sector. Far from it.

Multiple Winners from Coast to Coast
Also this year, West coast-based Moose Boats this year was awarded a contract from the City of Rochester, New York Fire Department for the construction of the first M2-38 Fire Rescue Catamaran to be delivered to the Great Lakes. That win is especially sweet for Moose Boats, especially given that there were multiple bidding firms in closer proximity to this northern New York municipality. Twin Cummins 425hp turbo diesel propulsion engines, Twin Disc transmissions and Hamilton water-jets will power the M2-38 aluminum catamaran. Rochester Fire’s new Moose Boat will be equipped with a fire pump system flowing over 1,500 gallons per minute of fire suppression water to cabin roof and cockpit mounted monitors while simultaneously maintaining full maneuverability from both propulsion engines and jets. Not everyone can boast those capabilities. Moreover, an integrated 5” diameter discharge will allow Rochester Fire to flow water to land based fire apparatus where hydrant systems are not present.

The City of Rochester, N.Y. Fire Department (RFD) boat committee began researching potential boat builders and conceptualizing a fire rescue boat of approximately 40 feet to best suit their application on Lake Ontario in 2013. The RFD’s Area of Responsibility includes the Genesee River, Great Lakes Shipping Channel, over 1,000 seasonal and transient boat slips, several private marinas and a commercial cement-shipping terminal. Monroe County in which the City of Rochester resides has the second largest number of boat registrations in the State of New York. Adding further to that, Rochester is located just a short distance from an international border with Canada and it experiences some of the most extreme “Lake Effect” weather in the lower 48 States. Rochester’s list of potential response scenarios therefore becomes very long; including but not limited to open water fire suppression, search and rescue, multi-causality commercial airline accident, land-based disaster relief, CBRN response, patient treatment, helicopter extractions and more. Being that there is no such thing as a perfect boat, the committee set about contacting agencies utilizing Moose Boats and products other builders for comparison. Eventually, RFD’s boat committee traveled to Sandwich, MA to see how their Moose Boats M2 Fire Rescue Catamaran performed in a wide range of scenarios including close quarters maneuvering, fire suppression and open-water sea keeping in the notably rough Cape Cod Ship Canal entrance. They returned from that trip pleasantly surprised with the versatility of the catamaran and had made the choice that the M2 Fire Rescue Catamaran was their preferable hull form and Moose Boats their builder of choice. Having been awarded a DASNY grant to purchase the Moose Boat, the RFD committee’s work was about to come to fruition and they went about refining their specifications in 2018 prior to the early 2019 contract signing. RFD’s five plus years of research will make their Moose Boat decisively outfitted very well suited to its environment and mission while being at the forefront of Moose Boats’ constant cycle of innovation and evolution.

In the end, RFD came to know that their potential buy was not Moose’s first rodeo in the world of fireboats. Far from it. In addition to the Sandwich, Mass. delivery, Moose also delivered another cold climate M2 Fire Rescue Boat to New Bedford, Mass. in 2016 with a single firefighting pump; engine derived air conditioning and cabin heat and heated windshield glass derived from high powered alternators and inverters thus eliminating the need for a generator. In 2018 Moose Boats delivered still another M2 Fire Rescue Catamaran to the City of Newport, R.I. 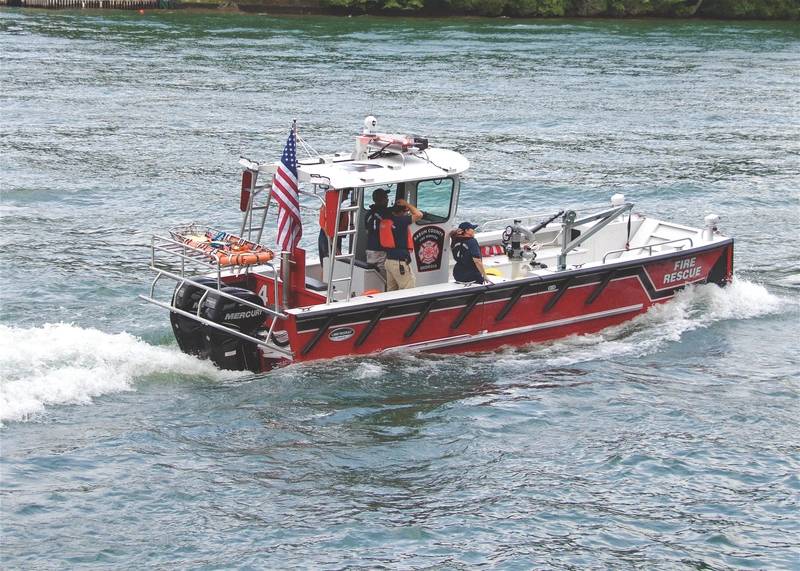 The Best of the Rest
Further south, and proving once again that geographic separation is no impediment to winning a bid on value and price, Wisconsin-based Lake Assault Boats recently placed a fireboat into service with Georgia’s Rabun County Fire Services on Lake Rabun, an 835-acre reservoir with 25 miles of shoreline. The new craft provides fire suppression and emergency response services. The craft can quickly transport water into a network of standpipes located along the shoreline to supply lake water for ground-based firefighting operations. Moreover, its deck-mounted monitor enables the craft to conduct direct fire attack. The fireboat is powered via twin 175 hp Mercury outboard engines, and features a 1,250-gpm fire pump driven by a marinized V-6 engine. The monitor has four discharge ports including one that feeds a 5-inch large diameter hose (LDH). Other features include a swing-out side dive door, and a Davit crane with two access points. The T-top pilothouse feature forward looking infrared (FLIR), sonar with side structure scan, chartplotter and GPS. 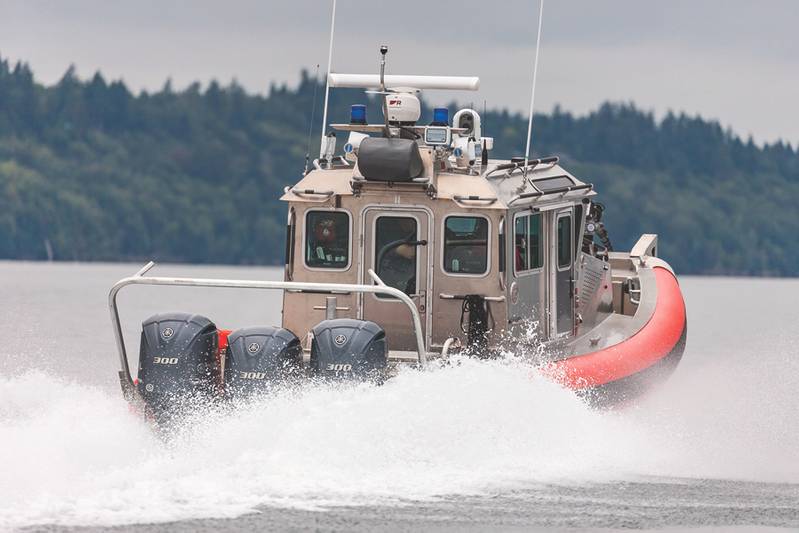 Not to be outdone, SAFE Boats International (SAFE) has delivered boats 17, 18 and 19 to the marine division of the New York Fire Department, all during the month of August 2019. The three latest additions to the FDNY fleet are 33’ full cabin boats, the most popular configuration because of the options it provides the crew in terms of maneuverability and operability. Vessels capable of fighting fires from the water is not a new concept; over the years SAFE has helped agencies around the country – and the world – add technology-forward options to their water-borne public safety operations. Separately, Jensen Maritime, Crowley Maritime Corp.’s Seattle-based naval architecture and marine engineering company, has provided the detailed design for Shaver Transportation Company’s new, Z-drive tug – Samantha S. The multi-purpose tug was built at Diversified Marine Inc., in Portland, Ore., and is operating along the West Coast. The tug is ABS-classed and carries a FFV1 firefighting notation. The 112-foot by 44-foot tug has a 22-foot draft, was built for escort, ocean towing and ship assist, and has firefighting capabilities if needed. The tug features a raised pilot house and a squared forward end. The large, flat bow allows the tug to come up flat against the transom of ocean-going ships in the Columbia River. The tug is equipped with two wire winches forward, and six aft, for hard wiring to the stern of large ships for escort. Jensen’s latest concept embodies the full idea of “multi-mission” capabilities, and this hull will serve its operators well, in any rolls.

Where’s the Fire?
Any city, state or county that has a significant body of water to protect and patrol needs a fireboat. Some, if not all, need more capabilities than that. Fortunately, fireboats come in all shapes and sizes, hull forms and from myriad domestic sources; coast to coast. Today, they are being produced in quantity and quality, responding to the demands of an ever-increasing market sector. That’s not going slow down anytime soon. 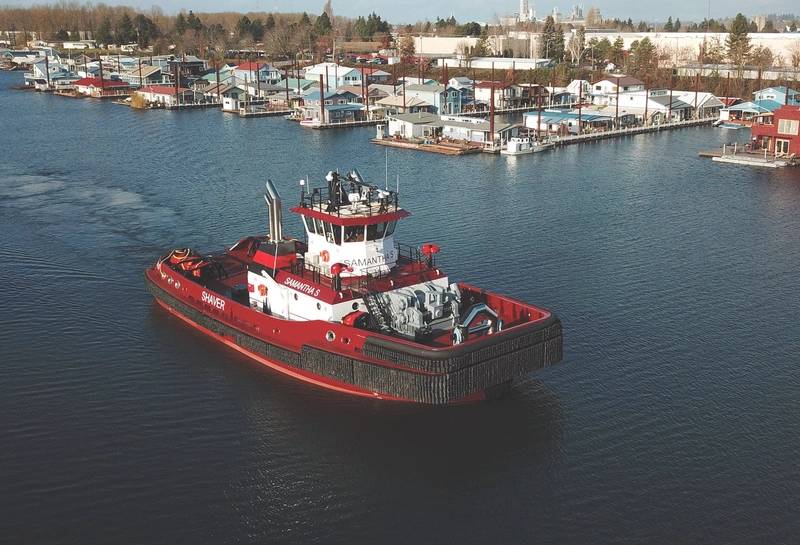 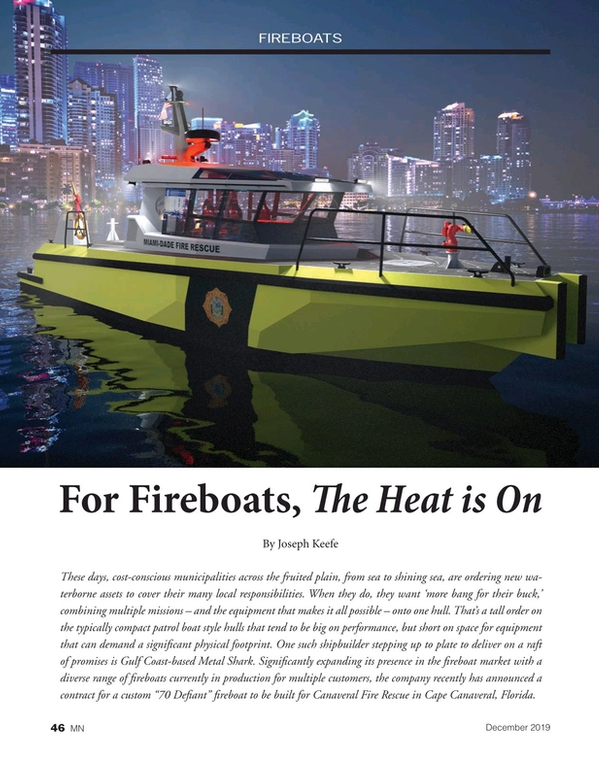 Read For Fireboats, The Heat is On in Pdf, Flash or Html5 edition of December 2019 Marine News