Moose to the Rescue

This West Coast boat builder stays busy creating high quality fireboats for a diverse set of demanding, multi-missioned first responders. For Moose customer satisfaction is the name of the game. This year, they’ve got that box checked.

Vallejo,CA-based Moose Boats builds aluminum catamaran and monohull vessels designed to meet a variety of mission-specific applications for military, law enforcement, emergency response, firefighting and security patrol purposes. It’s been a busy year for Moose, who also recently laid the keel for a 75’ catamaran crew boat for Westar Marine Services in San Francisco. But, it is fireboats that this builder is known for. And, at present, it would not be an exaggeration to say that fireboats are ‘hot’ for Moose Boats.

The firm has built and/or delivered no less than three fireboats in this calendar year; all of which are chronicled in this entry. Another law enforcement platform, which went straight to the head of the class in our GREAT WORKBOATS feature, can be seen on page 32 of the MarineNews December print edition.

Operating on the site of the old Mare Island Naval Shipyard, with expanded facilities and easy access to deep water, Moose Boats has expanded its capabilities and its output is widely known for its durability, sensible design, and attention to detail. Although the firm has its standard layouts and hull forms, each boat is custom built to the needs of the customer, with every detail geared towards the boat’s final mission. And, when it comes to municipal first responders, they like to cram as many capabilities onto one hull as is possible. Within this piece, we’ll outline the best of three different recent deliveries.

North Beach VFD, Chesapeake, MD
North Beach chose the Moose Boats M1-46 Fire Rescue Catamaran for their many needs. And those needs are plenty. The new vessel will be based in Chesapeake Beach, Maryland and serve as a search and rescue and fire suppression vessel for the Chesapeake Bay. Three forward facing shock-mitigating seats will support the crew while a full length patient care bench, a crew bench seat and head enclosure will occupy the aft end of the large walk-around cabin. Firefighting foam will be stored in the aft deck box and hose storage will be in forward deck lockers.

The M1’s air-draft will be reduced to allow North Beach VFD to transit the many low clearance bridges in their area of responsibility. In a nutshell, the M1-46 has the ideal balance of heavy weather capabilities, shallow draft, maneuverability and fire suppression capacity to fulfill North Beach VFD’s wide range of response scenarios.

“The North Beach Volunteer Fire Department chose the 46' Moose Boat for many reasons,” explained Chief Chris Mills, North Beach VFD. He added quickly, “The coverage area which spans approximately 25 miles north to 30 miles South 10 miles east of our location on Chesapeake Bay. The area in which we serve has a natural gas plant and a power plant which are located 14 miles to the south.”

The M1-46 Moose has a stable working platform and capable of holding 36 persons if needed for a rescue of one of many cargo ships or cruise line boats. Mills continued, “We are also a small fishing town that has a fleet of charter boats and sailing vessels along with crabbers and oystermen. The weather we encounter on the Chesapeake Bay can be treacherous at times with seas ranging from 1 to 6 feet and the seas very close together at approximately 2 to 3 seconds apart. We feel that the 46 Moose will serve our needs and then some.”

City of Memphis
Staying competitive in terms of both price and quality, even east of the Mississippi River, Moose’s third delivery to the East Coast comes in the form of the City of Memphis’ new Moose Boat M2-28 Catamaran, which will be primarily used as a patrol boat for the Police Department’s full time Harbor Patrol unit. Underscoring its multi-missioned capabilities and intended role, it will also serve as a shared asset with Memphis Fire Department providing search and rescue and fire suppression duties in the treacherous Mississippi River and its tributaries.
The shallow draft, stability, maneuverability and functional deck layout made the M2 Catamaran an obvious choice for the City of Memphis allowing them to fulfill all of the requirements of the vessel’s multi-mission role without compromise to its daily patrol duties. The City of Memphis Harbor Patrol also works closely with the local U.S. Coast Guard Sector, making the new Moose Boat a valuable regional asset.
Special features of this dynamic hull include a 5” Diameter Hydrant Supply Valve, Breathing Apparatus, an Air Distribution System, Radiation Detector and a Patient Treatment Bench. Major William Freed of the Memphis Police Department was predictably effusive in his praise of his new hull, saying, “The boat we received from Moose Boats has exceeded our expectations. This is the first joint Police and Fire boat for the City of Memphis and our expectations were pretty high. We are looking forward to utilizing it to improve our patrol, search and rescue and firefighting capabilities on the Mississippi River.”

Due to the Moose Boat’s Homeland Security role, it will also be equipped with a Hale fire pump flowing in excess of 1,500 gallons per minute of fire suppression water, radiation detection equipment and CBRN positive pressure cabin filtration. A heavy-duty push knee will enable the M2-38 to come in contact with larger vessels and San Francisco’s many piers.

That kind of track record doesn’t happen by accident. But, even if it did, coming soon to a port near you, Moose will continue to ‘come to the rescue.’ www.mooseboats.com

This article first appeared in the December 2018 print edition of MarineNews magaine. 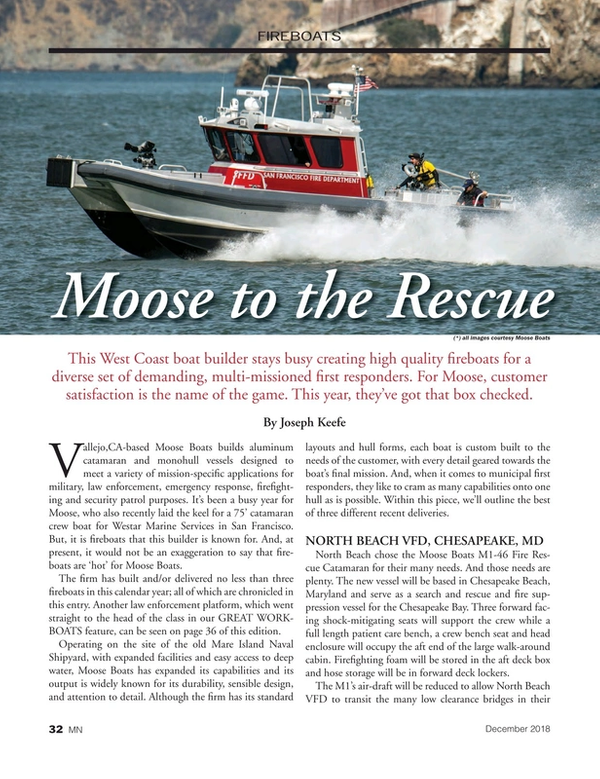 Read Moose to the Rescue in Pdf, Flash or Html5 edition of December 2018 Marine News